I just returned from a trip to Thailand to visit with Andy Ricker of Pok Pok restaurants fame. We visited four establishments in Chiang Mai on the first day, including an unusual grilled chicken spot that also makes a terrific papaya salad. They marinate their chicken in coconut milk, fish sauce, coriander seed, garlic and palm sugar and use a revolutionary grilling method to vary heat level. At one market, we filmed a recipe for steaming chicken with a potent chili-garlic-turmeric paste and visited a rice porridge shop that redefines fast food. Just before sunset, we went to the Hot Basil Restaurant for People Who Like to Eat Spicy Food—or, in the vernacular, Raan Kaphrao Samrap Khon Chawp Kin Phet—where I ate the best flash-stir-fried greens of my life. They also taught me how to deep-fry eggs in a wok and how to steam savory custards.

The next day we visited Andy at his house outside Chiang Mai in northern Thailand, about 150 kilometers from the Burmese border. He demonstrated more easy weeknight Thai favorites: a wok-fried omelet, a steamed dish that makes soup and chicken at the same time, easy but interesting stir-fried rice and a quick greens stir-fry based on the restaurant dish we sampled the day before. Before I left, I stopped at a hard-to-find metal shop that sells cheap but solid cleavers (around $10 each). I bought three different designs to test at Milk Street. And a huge thank you to Andy and our local guide, Nok, who were kind and helpful to a fault. See below for some photos from my trip.

Like many of you, I used Milk Street recipes for Thanksgiving, including the turkey (the family agreed it was the best ever, even without brining), the Brussels sprouts and the pumpkin tart, which was a big improvement over my regular pumpkin pie. This month, we are rolling out our holiday recipes—as an email subscriber, you should already have received links to our sticky toffee pudding, our kale salad and our innovative roast beef, which upgrades a cheap cut into a first-class roast. Next up is our French spice cake (pain d’épices), a fine make-ahead breakfast or afternoon treat that keeps fresh for up to a week. Leave it whole and you have a gift for friends and holiday guests.

Yes, there still is time to give gift subscriptions to Milk Street Magazine. The next issue already is out of the kitchen and into layout. Click here to add friends and family to your gift list. (It’s a lot more interesting than a scarf or yet another iPhone case!)

Our radio show, Milk Street Radio, is up and running. You can subscribe to the podcast on iTunes or listen to it on your local public radio station. Starting Dec. 10, you can hear my interview with Michael Pollan, author of “The Omnivore's Dilemma” and star of the Netflix series “Cooked.” My interview with Andy Ricker (recorded in Thailand) is coming up soon, as is an interview with Dorie Greenspan, author of the recent “Dorie’s Cookies.” She shares some of the advice Julia Child gave her over the years, including “Always wear lipstick!” I also interviewed Rohan Anderson, who redefines the notion of locavore from his home in Victoria, Australia; his recipes include gardener’s payback paella (with snails and rabbit) and sneaky eel dip, which tastes just like smoked trout. How he catches the eels in the first place is worth a listen.

I leave you with a bit of a love song for Thailand. I was taken by the people, who are beyond gracious. You are greeted with the traditional prayer-like meeting of the hands and bow of the head—infinite in its variety and meaning. They are still in deep mourning for the late King Bhumibol, who reigned for 70 years. (Nok, our guide, told us that he came to her village when she was a child to assist in establishing running water.) When they build a house in Thailand, they also constructs a small “spirit house” for the ancestors displaced by the new structure; incense and food are left regularly to honor them. A deep respect for the past lies just beneath the surface, a surface that is always unhurried.

As for the food, I fell in love with tamarind in all its guises (a fruit drink, a paste used in sauces, etc.), fresh turmeric (both red and yellow—I never knew there was such a thing) and the conviction that quick, simple food also can be great food. A good reminder for all of us. It is, of course, the essence of Milk Street.

All the best for the holidays from all of us. Our cooking class schedule has been posted for January and February. Would love to see you soon at 177 Milk Street in Boston! 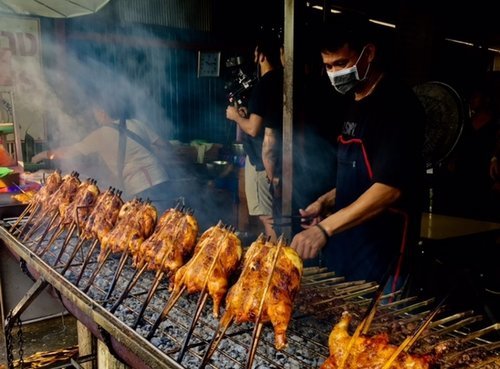 This grilled chicken restaurant uses water-soaked bamboo skewers to move chicken closer to or further from the heat. The marinade and barbecue sauce were outstanding; Milk Street is developing recipes inspired by these for an upcoming issue of our magazine. 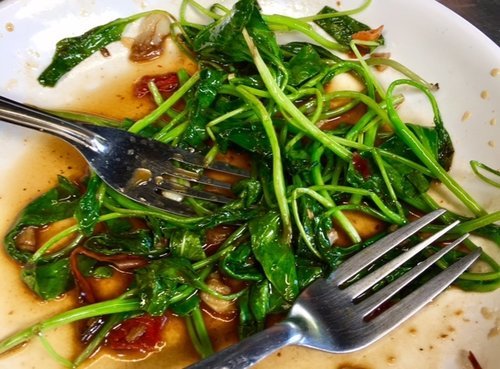 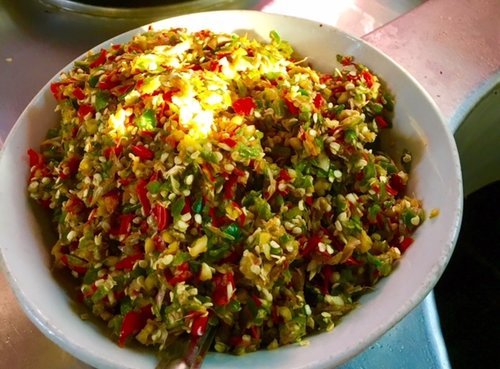 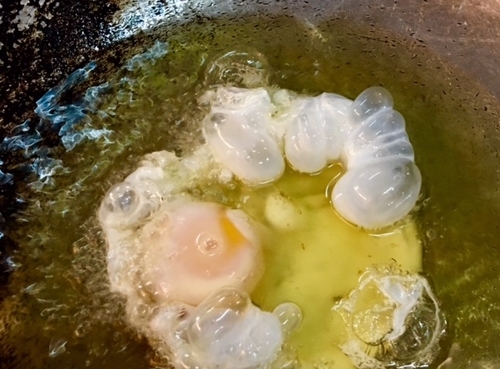 In Thailand, they often use woks to deep-fry eggs and omelets. When whisked eggs are poured into the hot oil, they bubble up and create fluffy omelets. 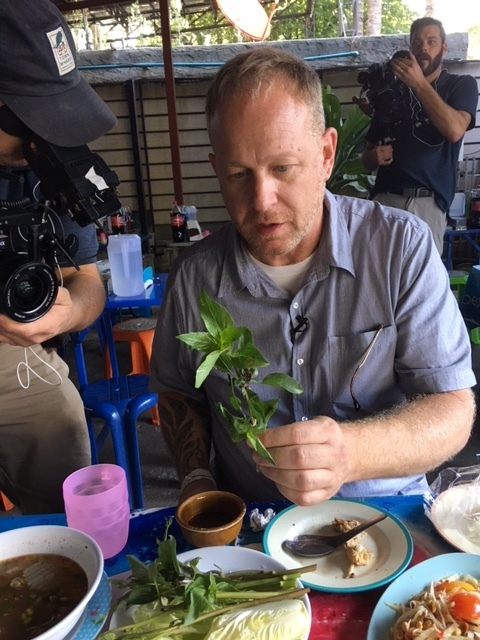 Andy shows Chris Thai basil at the grilled chicken restaurant. The restaurant also makes a terrific papaya salad using a wooden mortar and pestle to infuse the papaya with flavor. 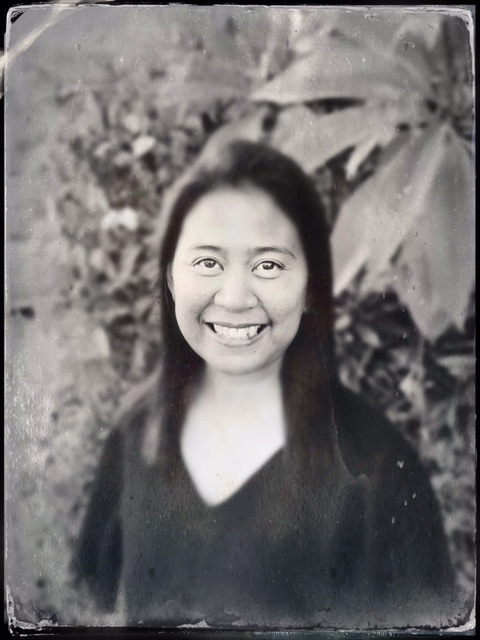 This is Nok, who organized the trip on the ground in Chiang Mai. She was terrific and provided wonderful hospitality. 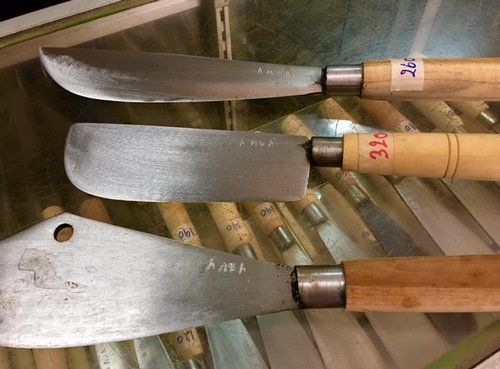 Andy gave Chris the address of a metal shop in Chiang Mai (almost impossible to find) which sells knives, hatchets and more. Chris bought these three cleavers for about $25 total. The one on the bottom is the classic Thai cleaver. It provides lots of leverage, which makes butchering a whole chicken easy. 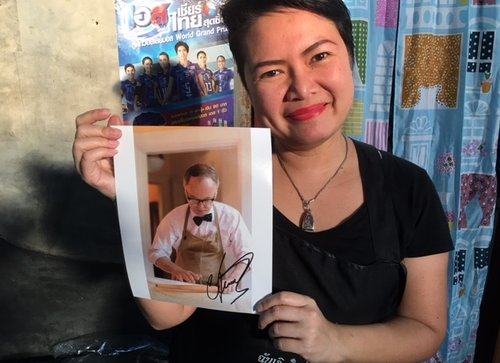 This shot was taken at the Hot Basil Restaurant for People who like to Eat Spicy Food! Anthony Bourdain had beaten Chris there, but they wanted a signed photograph with a cook who wears a bow tie. (Chris didn’t see any bow ties in Chiang Mai!)