In fact, the Israelis get hummus right in ways we hadn’t even considered we could mess it up. This dawned on me just after I stepped off the plane in Tel Aviv.

“Where will you eat hummus in the morning?” My taxi driver wanted to know.

In Israel, hummus is breakfast. Not a party dip served with “baby” carrots. Not adulterated with pesto or artichokes or—God help me—chocolate.

My education begins the next morning at Abu Hassan, the country’s premier hummus shop, around since the ’60s. And it begins early. In a flurry of scooters, pedestrians and cars, customers line up shortly after 7 a.m., some carrying mixing bowls, plastic food containers, foil baking pans. Hummus take-out is very DIY. The shop will close once the hummus runs out.

Abu Hassan has two locations; I’m at the original, a beige storefront. In the distance, a sliver of the Mediterranean Sea peeks between buildings. On the left side, a tiny dining room that spills onto the sidewalk is already at capacity. On the right, a window and a line of people waiting to order. 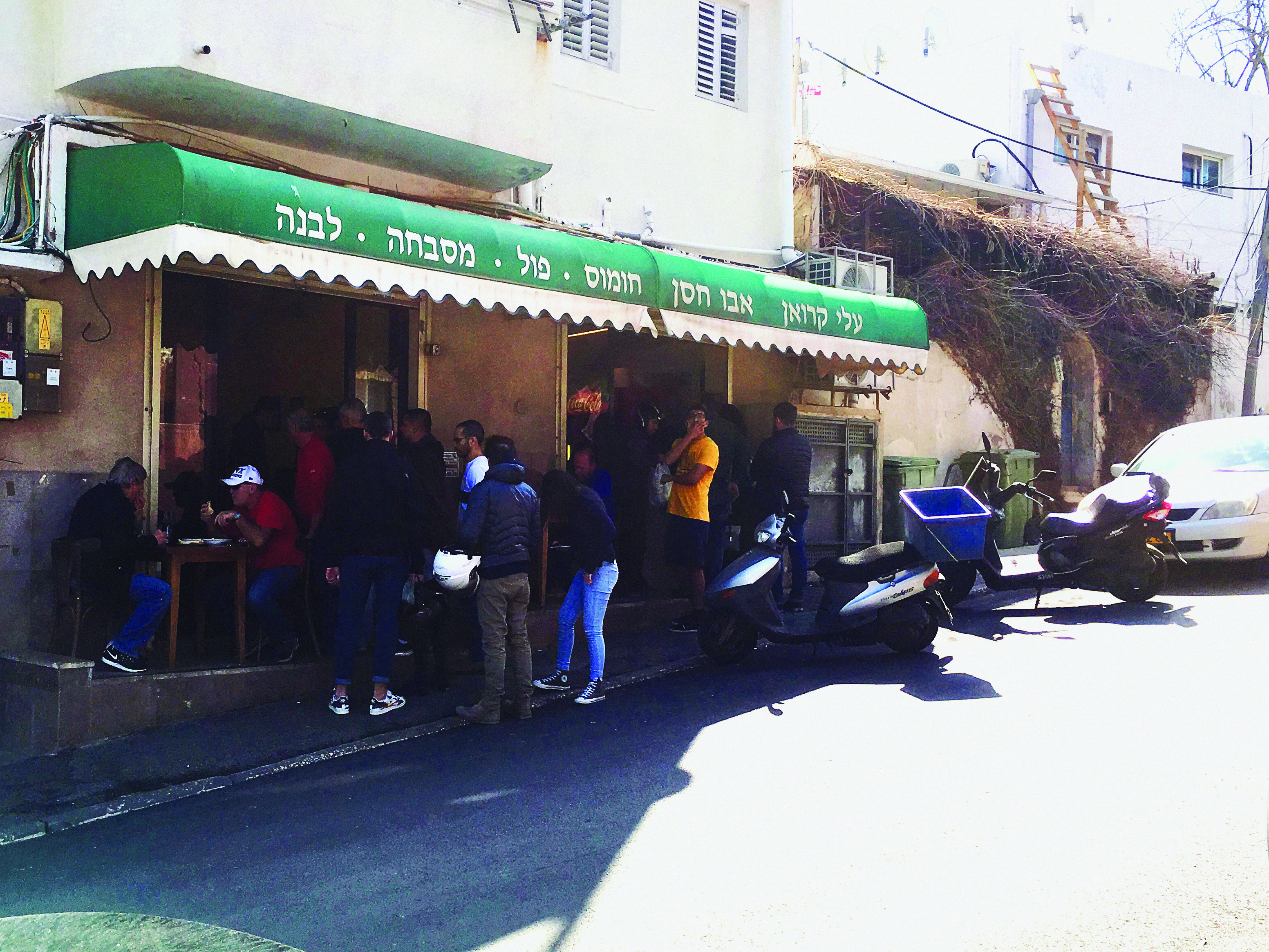 Crowds gather at Abu Hassan—Israel’s premier hummus shop—by 7 a.m. and the shop closes as soon as the hummus runs out.

At each of the eight or so tables, customers are handed wide, shallow bowls swirled with hummus topped with whole chickpeas, a sprinkle of parsley, pops of red paprika and amber cumin. Side plates hold stacks of pillow-soft pita breads and quarters of raw onion. The sea mixes with warm bread, concocting a seductive air. Crowd be damned, it is quiet beyond murmurs. These are workers stopping for a quick breakfast on their commute. The hummus was made in the early hours, so even the kitchen feels hushed.

Watching them eat is jarring. Sure, some rip off hunks of pita, swooping it fluidly into the yogurt-­soft hummus, a scooping technique every child masters. But many pull the bowls toward them and eat it with a spoon, as we would soup.

My turn at the window and I make a hummus faux pas. I want what I see, so I ask for hummus and pita. I get a strange look and a request for 10 Israeli Shekels, or about $2.70. Instead of the beautifully dressed bowl I craved, I get a bag. Inside, a split pita with hummus oozing out the sides.

Turns out, pita is implied in any order of hummus. By calling it out, apparently I overstated the obvious to which I was oblivious, changing my request into some sort of unorthodox sandwich. Hence the odd look. Nonetheless, I eat—rather messily—standing at the sunny curb, surrounded by others expertly balancing bowls and bread.

I don’t care. I am transfixed. This no tub of American grocery store hummus. It is light, etherally smooth. The flavor is at once boldly nutty with tahini yet also subtle. None of the harsh garlic and lemon I expect. Is there even any garlic in it? Most shocking: It is deliciously warm. Who knew you could eat hummus warm?

I ask—repeatedly over several days—but the men at Abu Hassan won’t share their secrets. But at least they had shown me what hummus should be. To deconstruct that, I head an hour south, to the walled Old City of Jerusalem. 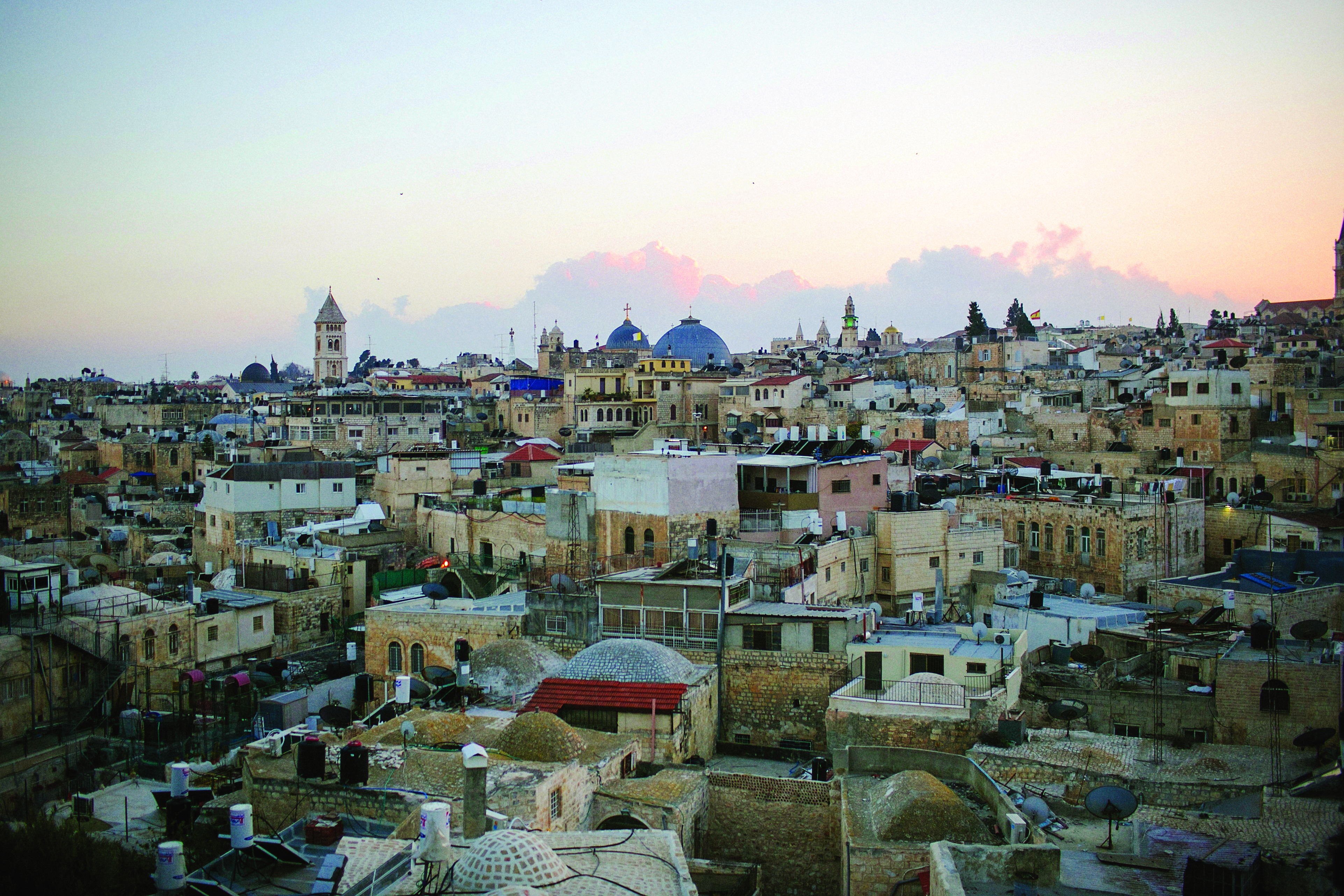 In the Old City of Jerusalem, Arab and Israeli cultures and cuisines come together, and wonderfully so in bowls of warm, ethereally smooth hummus.

Hummus has been an unlikely flashpoint in the Middle East. Various countries and people claim it as their own, a push and pull that would be comical if the factions weren’t already so at odds. In recent decades, Israelis became particularly enamored with it. Today, Jews and Muslims alike savor it. But it began as an Arab dish. So I seek an Arab as my first teacher.

Samah Siam’s home—a warren of small, almost subterranean stone rooms in the city’s Muslim Quarter—is a short walk along narrow cobbled roads from the Damascus Gate, a massive entrance to the city that dates to the 16th century. She will teach me the hummus her mother taught her. Her 20-year-old daughter, Aseel, translates from Arabic as Samah pulls a pot of steaming, freshly cooked chickpeas off the stove.

She works quickly and by instinct, measuring nothing in her small kitchen, which is a contrast that spans thousands of years. Jesus likely walked past her home. Today, a reality competition plays on a flat-screen TV on the other side of the room. Stray cats—which are legion in Israel—saunter past the open door. Eager to impress, her husband, Riad, takes us to the rooftop, from which a stunning panorama of history and faith unfolds.

When we return, Samah explains that the chickpeas are always pureed warm and hummus is always served warm. They are creamier that way. And they are pureed first with nothing but their own cooking water, a critical ingredient for reaching a silky consistency. When her blender has reduced the chickpeas to a soft puree, she adds tahini, lemon juice, salt. Nothing else. No garlic.

The hummus pours easily from blender to bowl. Samah—whose family in winter eats fresh hummus almost daily for breakfast—adds a drizzle of olive oil, a spoonful of whole chickpeas. It is warm, savory and soft. We eat it with fresh pita.≠≠

​Samah Siam teaches Palestinian cooking at her home inside the Damascus Gate in the Old City of Jerusalem.
At Shlomo & Doron, near Tel Aviv’s massive outdoor Carmel Market, the toppings are as important as the hummus itself. Ful (pureed favas) and shakshuka (tomatoes and eggs) are the two most popular.

Back in Tel Aviv, I meet with Elad Shore. His family opened the Shlomo & Doron hummus shop in 1937. The 27-year-old sits, sorting fava beans, at one of the tables outside the shop, near the massive outdoor Carmel Market. He confirms the simplicity of hummus, then talks toppings. It is something his shop takes particular pride in.

What about the onions, I ask as a man on a motorbike delivers fresh pita. I couldn’t get enough of the warm pita, but Elad explains that Israelis use as little as possible. “It’s too heavy, especially at breakfast” he explains. Instead, they break the quartered onions into thin scoops, using them to spoon up hummus. An acquired taste, to be sure.

On my final day in Tel Aviv, the cooks at yet another hummus shop, Gargir Hazav (“Grain of Gold”), invite me into their kitchen. A cauldron of chickpeas boils over on a gas burner, sending rivers of foam onto the tiled floor. We focus on proportions and timing, all of which surprise me.

Oren Mizlahi, who learned hummus-making from his father, ladles 4 or 5 liters of freshly cooked chickpeas and cooking water into a food processor. He walks away for one, then two, then three minutes. Far longer than I’ve ever let anything process. He opens the cover and steam billows out. He adds tahini—a full liter. Far more proportionally than I’ve ever made. Then he purees the mixture for another full minute. I start to understand why Israeli hummus is so light and smooth.

At Gargir Hasav, near Tel Aviv’s Levinsky Market, hummus is made fresh each morning, 5 liters at a time. To ensure a smooth, almost sour cream-like consistency, the chickpeas, still piping hot, are pureed for a full three minutes. I

Back at Milk Street, we had work ahead of us. First, the ingredients. We’d never noticed, but chickpeas come in a range of sizes. In Israel, they favor smaller varieties, about the size of green peas. Larger chickpeas make grainy hummus. We agreed. We tested conventional chickpeas against smaller varieties, such as the Whole Foods Market 365 Everyday Value brand, and overwhelmingly preferred the latter.

Tahini was also an issue. Tahini is more common In Israel than ketchup is here, and brands and varieties are numerous. Less so in America. A toasted, thin (i.e., pours easily) tahini is needed to get the creamy consistency and rich, savory flavor we wanted. It was also essential to stir the tahini very well; some brands separate and clump. We liked the Kevala brand, but Soom and Aleppo brands also worked. We did not like Joyva, which was dark, thick and tasted bitter, almost burned.

We were pleased that in Israel the chickpeas are cooked in a familiar way—soaked overnight, then drained, then boiled with baking soda (to help soften them). We found that adding salt to the soaking water not only helped tenderize the chickpea skins, but also helped them absorb more water (softening them further). We tried cooking them without soaking—both pressure cooking and boiling—but neither method worked nearly as well, producing hummus that was dark, with a muddy flavor.

We questioned whether the extreme processing Oren showed us was really necessary. Most recipes here only call for processing until smooth. But when we compared, processing for a full three minutes made a significant difference; the hummus was noticeably creamier and lighter. We also tested the blender versus the food processor and found the latter not only did a better job of pureeing, it was also easier to get the hummus out of.

We wondered if processing the chickpeas while warm really was important. Once again, the Israelis knew their stuff. Hot chickpeas made a much smoother hummus. For a do-ahead option, we found we could soak the chickpeas overnight, then drain and refrigerate them for a few days before cooking. We also found that cooked chickpeas could be kept in their cooking water for an hour after boiling, then reheated briefly just before making the hummus. The heat rule also held true for serving. The taste of warm hummus was substantially better than cool.

Finally, dried chickpeas versus canned. Honestly, until this trip I despised working with dried beans. It’s a pain when fully cooked beans are just a can opener away. But that is anathema in Israel. Now, I agree. We tried canned—which we heated before pureeing—and while the results were certainly better than the tubs sold at the grocery store, they could not compare in flavor or texture to hummus made from freshly cooked chickpeas.

So now I will soak and boil and puree for a very long time. Because pared down to its basic elements, hummus is breathtakingly good. But I’m still not sure I’ll eat it scooped up with raw onions.