Let’s start with proper attribution. This dish was inspired by Fuchsia Dunlop’s recipe, Fuchsia’s Emergency Midnight Noodles, from her cookbook “Every Grain of Rice.” Her recipe has become my go-to last-minute pasta recipe, even when it isn’t midnight.

But at Milk Street, we had some touching up to do to adapt the recipe to the typical American home kitchen.

The first issue was the noodles. We tested dried Asian wheat noodles, dried Chinese egg noodles, dried soba and fresh yakisoba. Buckwheat noodles lost their toothsome texture too quickly, and noodles that were too thin, such as Japanese somen or Chinese misua, lost their shape. Fresh noodles were nice but less practical for a pantry-staple recipe. The winners were soft, chewy wheat noodles, such as udon or lo mein, followed closely by egg noodles. We preferred dried noodles about the width of spaghetti. (You can, of course, also use an Italian pasta, such as spaghetti.)

If you have chili oil, as Dunlop does, then this recipe is a tad simpler. For the rest of us, however, the solution was to infuse grapeseed oil with the flavors of red pepper flakes and sesame seeds. This takes just a few minutes. Then we tossed in scallion whites off heat, to temper their raw flavor.

These noodles are often served with a fried egg on op, so this approach came with another benefit: Because we already had a skillet—we didn’t clean it out—with bits of infused oil, pepper flakes and sesame seeds, the eggs’ flavor was improved.

Our ingredients for the sauce lined up with Dunlop’s recipe (soy sauce, vinegar and toasted sesame oil) save for Chinese black vinegar, which can be hard to find. For similar flavor, we combined unseasoned rice vinegar and brown sugar.

When you first toss the noodles with the sauce, the mixture will appear a bit too “saucy.” However, the noodles quickly absorb much of the excess.

You could add more ingredients—broccoli, asparagus, edamame—but that seems silly. This is a recipe for pasta with sauce that you can throw together any time, no matter what time of day. 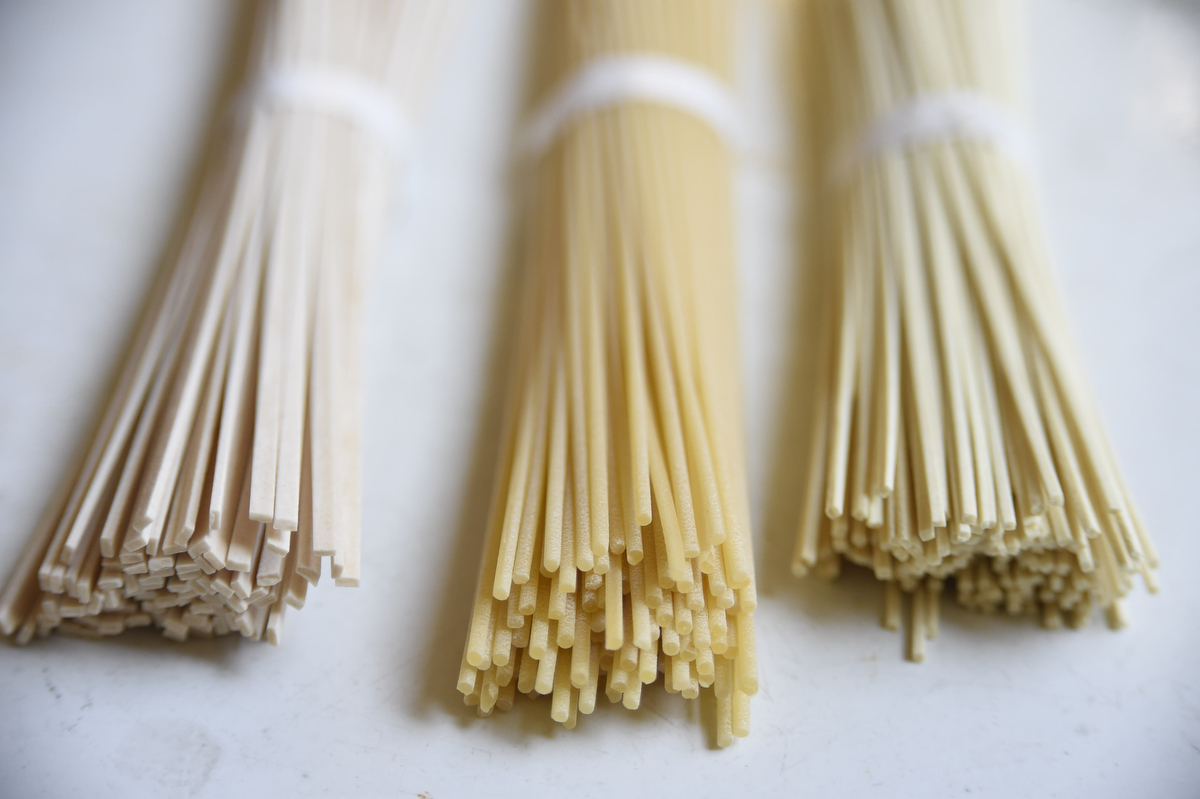 Dried Asian wheat noodles were best in this recipe. We most preferred Japanese udon (left), which have a soft, springy texture and are made with white wheat flour. Firm, chewy Chinese lo mein (right), made from wheat flour and egg or water, also holds up well to the noodles’ sauce. Even spaghetti (center) will do for this dish.