It’s a church scene that would be at home in the American South, the dynamic pastor extolling, shouting and singing the virtues of God’s guidance. The crowd rising to its feet from the pews, arms raised and waving, hands clapping, choruses of Hallelujah! reverberating. Music washes rhythm over joyous faces, the women dancing and praising, their iridescent dresses shining.

“This week will be a week to remember! Bring Jesus in, and nothing evil will harm you,” Bishop Clarence Paye shouts soulfully into a microphone from a gold and glass lectern on an elaborate padded green altar. Men, women and children, drenched with sun from towering windows, find it impossible to remain still. “There is a place in life for you!”

When the service winds down, still gently swaying congregants make their way out the back of the church, piling into cars to head to family meals that, like the church itself, seem to have been lifted out of the South. Rich, gently sweet cornbread. Boldly spiced rice with sausage and peppers. Stewed greens and chicken. And the dish that would define my visit: warm, aromatic banana bread.

Except Dominion Christian Fellowship Center isn’t in America. It’s on a boisterous main drag in Clara Town, a suburb of Monrovia, the capital of Liberia—a deeply Christian and often blisteringly hot wedge of a country at the lower edge of West Africa’s promenade into the North Atlantic.

Everywhere in Liberia, there are echoes. In the churches. The politics. The language. Particularly the foods. Echoes of a challenging past woven across an ocean and back, woven from threads that invariably tie the country back to the American South and its churches and its politics and its language. And particularly its foods.

Liberia—an oceanside patchwork of dry earth and lush forest punctuated by hardscrabble villages and subsistence farms—was founded in the early 1800s in response to the slow collapse of slavery in the United States. It was an ill-conceived and controversial operation to relocate freed Blacks, a move to appease slaveholders who feared them and to placate abolitionists who held the misguided notion that former slaves could be simply sent “home.”

It didn’t go well. Among the many problems: Only some of the freed slaves had been taken from the land that would become Liberia, and their arrival prompted generations of often bloody conflict between the settlers and existing populations.

Today, only about 5 percent of Liberians are descendants of those settlers. Yet their culture persists. The government is patterned on the U.S. system. English is the primary language, though the evolution of dialect has rendered much of it foreign to an American ear. And then there is the food, thoroughly West African, yet resounding with those echoes.

The stewed greens of the American South here are cassava and sweet potato leaves, stirred with meat over open fires at homes and in massive pots to be sold at roadside stands. The dish certainly began in Africa, brought to the U.S. by slaves, who then brought it back to Liberia. Same for jollof rice, a spicy West African staple considered the ancestor of jambalaya, and the red rice that’s enjoyed regularly in Liberia.

Food is visceral in Liberia. Few homes have electric or gas appliances, so much of the cooking is done outside. Bucket-sized wooden mortars and 6-foot-tall pestles that can require the hands of two people crush everything from rice and ginger root to fresh chilies, fruit and onions. The cooking—whether baking, stewing or grilling—is done over charcoals.

Bananas grow wild like weeds. Most every street at one point morphs into a tangled market where community spills out day and night, and home, social and business lives blur. Vendors offer grilled meats, fresh produce, jugs of palm wine, single-serve plastic bags of water, car parts, clothing, coconuts, and mountains of the deliciously and wildly spicy chilies used in just about everything.

Over the course of a week, I encounter many dishes that have familiar echoes. But in none were they stronger than the local treat known as rice bread, sometimes called banana bread. Naturally vegan and gluten-free, it is made—as its names suggest—almost entirely from rice and bananas. I first taste it at the home of Sharon Mulbah, a cook whose house at the end of a long, rutted dirt road is perched at the edge of a marsh lined with fishing nets.

After preparing charcoals outside in a conical stove known as a cookpot, she pours a lumpy batter into a Dutch oven lined with thick, almost rubbery banana leaves. She sets the covered pot directly onto the charcoals, piling more coals onto the lid. It’s an ingenious way to replicate the all-around heat of an oven in a country where American-­style ovens are rare.

In about 45 minutes, as the setting sun turns the marsh golden, Mulbah uses the banana leaves to lift a round cake from the pot, its edges crisp and lightly browned, the center tender and steaming. Banana, ginger and vanilla aromas mingle familiarly, yet differently. When I taste it, it’s an explosion of warm fruit tucked into a tender, yet pleasantly granular crumb. It is wonderful and both very much like and unlike everything we love about banana bread.

To better understand this culinary dichotomy, I turn to Yassah Cooper, head cook at Cachelle Guest House in downtown Monrovia. Cooper learned her recipes from her mother and agreed to walk me through the making and baking of rice bread step by step. And that meant first walking to her local market for ingredients.

Ovens are uncommon in Liberia, so cooks bake banana bread in pots with hot coals set over and under the pan. 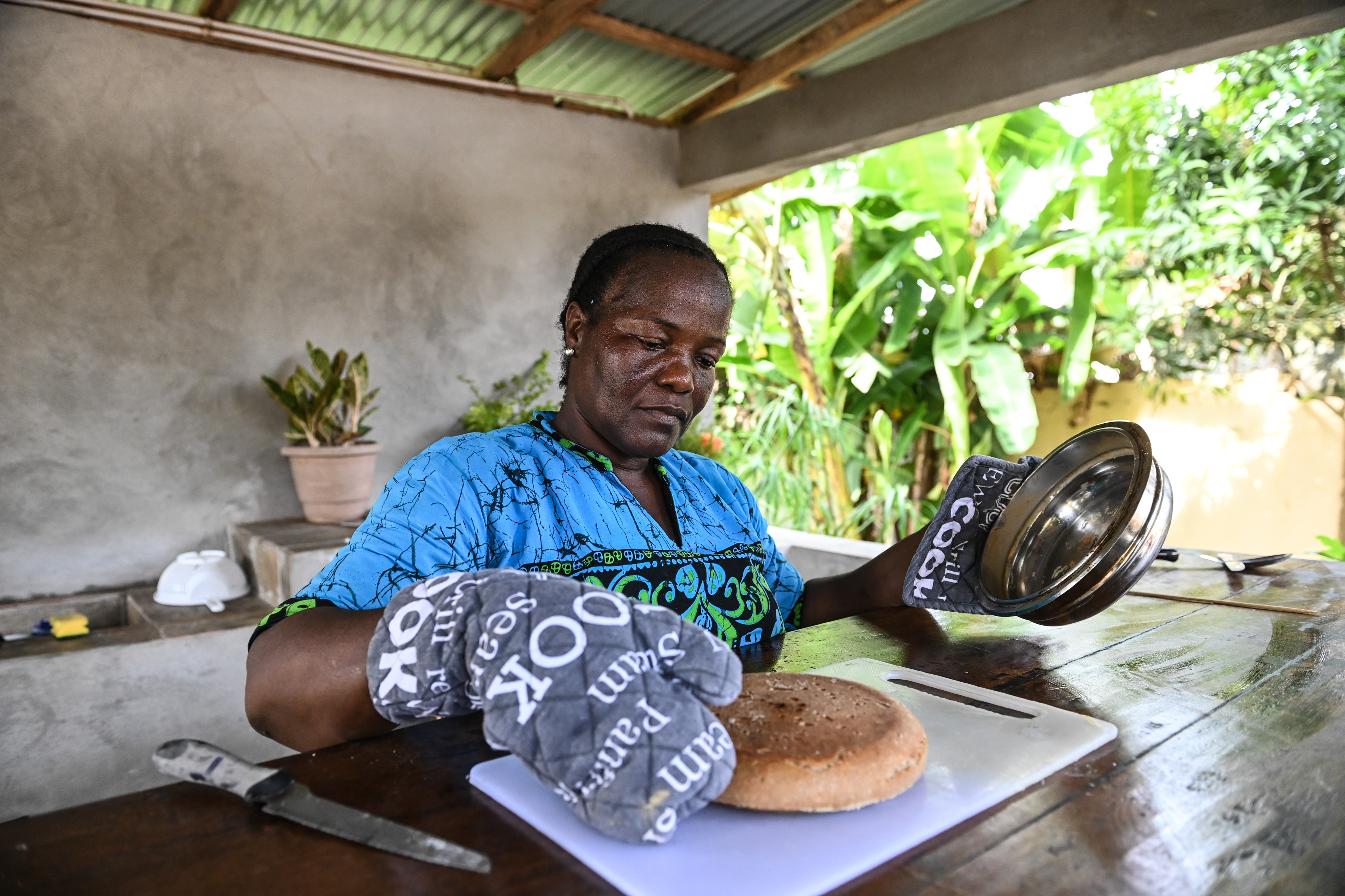 It’s an intense scrum of people, produce, animals, scooters and dry goods, all wriggling down a jagged dirt road flanked by corrugated metal homes and shop stalls set under a relentless sun. Cooper is highly selective as we navigate the crowd, rejecting the white rice sold at one vendor in favor of the “country rice”—the local brown rice—sold by another. “More color, more flavor,” she explains. Two bunches of very ripe bananas, nutmeg, fresh ginger and soon we head back.

At the guest house, we cook in a bright and breezy outdoor kitchen, a concrete and wood shelter with a metal roof and surrounded by—appropriately, of course—wild banana plants. Cooper rinses the rice, pours it into a massive mortar, then takes turns with another cook pounding it to a fine flour with a massive pestle, the repetitive thumping grounding our cooking.

The rice flour—wheat flour is almost never used—goes into a bowl, then first the ginger, then the bananas—16 of them!—get the same treatment in the mortar. Soon, the ingredients come together as a slightly chunky and almost entirely unsweetened batter—she uses only a hint of sugar—poured into a cake pan, Cooper’s preference to banana leaves. The pan goes into a Dutch oven, which she heats with coals over and under just as Mulbah did.

“You are our king! You are our savior! You die for us,” she sings softly while sitting next to the cookpot, fanning the charcoals. Realizing we are listening, she smiles. “When I am cooking, I sing my gospel songs.”

Soon, she lifts the cake pan from the pot, overturning the round loaf onto a cutting board. It smells richly, wonderfully of banana and ginger. With so little sugar I expect it to taste flat. Quite the opposite. The bananas add almost all the sugar needed. It’s a wonderful revelation. When you don’t weigh down the fruit with heaps of sugar, the natural sweetness is able to shine through.

And without eggs or the gluten of wheat flour, I expect the loaf to crumble in my hand. But the moist crumb is strong and delicious; the starch of the rice keeps it plenty stable. In fact, without eggs to add density, both flavor and texture remain light. And though finely pounded, the rice adds a pleasant texture similar to cornmeal.

It is, indeed, a delicious echo.