Stomp It! Cut It! Boil It! | Christopher Kimball’s Milk Street

I knocked on the door. Sonoko Sakai opened it, then went back to the task of preparing udon noodles—stomping on a mound of dough encased in plastic with her stocking feet. A few minutes later, having donned the bright red socks that she had provided for me, I did the same, developing the gluten by marching up and down on a mix of flour, water and salt. Welcome to the world of udon noodles.

Let’s begin with pronunciation. During my cooking lesson with Sakai, I referred to udon as “OO-don,” and she immediately corrected me. It is more “oo-dong,” the second syllable ending with a very soft “g” and a dropping of the voice.

But that was far from the only thing I did not know about this remarkable noodle.

According to legend, it all began when a Japanese Buddhist monk, Kukai (“ku” means sky, and “kai” means ocean), visited China in the early 9th century and brought back udon. It calls for just three ingredients: wheat flour, salt and water. Udon uses a higher-protein flour called churikiko—which can be hard to find even in Japanese grocery stores since it’s not common in the U.S. We found, however, that all-purpose flour also works well.

There are many varieties of udon, but the two major regional types are sanuki from Kagawa prefecture and inaniwa from Akita prefecture. The former is what I made with Sakai. It is made by stomping on the dough, it has a lot of chew, and it cooks for 10 to 15 minutes since it is thick. As Sakai likes to say, it has a mochi texture, which refers to the slightly chewy, yet soft texture of Japanese mochi (a sticky rice paste that is shaped into confections and often filled with bean paste).

For serving, it’s often paired with a dipping sauce, as with cold zaru udon, named for the flat basket upon which the drained udon is served. It can be stir-fried to make yakiudon. Or drop a raw egg yolk into it, and it is much like carbonara, but without the bacon. Or eat it with a simple hot broth and soy sauce. Sakai served it with a spicy dan dan-style meat and mushroom sauce.

Inaniwa udon is a bit more refined since it is thinner. In an inaniwa factory, dough hangs from poles and workers pull the dough to stretch it. It is not as thin as soba, but it is thicker than spaghetti and is flat, whereas sanuki is square. It cooks in just a few minutes and can be served cold with dipping sauce and wasabi or in a hot soup.

Though the stomping sounds like an artisanal relic, it actually is a most efficient way of developing gluten. When water comes in contact with flour, two proteins—glutenin and gliadin—start to unravel and form a matrix. This process can occur without kneading if you give it time enough, hence recipes for no-knead bread. But physical manipulation of the dough—kneading or stomping—turbo-charges the process.

And stomping is an ideal gluten-­development activity. Plus, it’s fun! You are building elasticity, structure and strength, which results in that perfect slightly chewy, mochi texture. And this texture is something much loved in Japanese culture. When Sakai goes home to Tokyo to visit family, they always make mochi (mostly for New Year’s), the Japanese pancakes called okonomiyaki or udon—all three good examples of this beloved texture.

Today, you can purchase frozen udon—Sakai is not a fan—as well as dried, the latter being a better choice. However, neither is half as good as homemade.

And the dish is revered. In Kagawa prefecture, one used to be able to take a “goemon bath,” in which the udon cooking water was used for bathing after the noodles were cooked and scooped out of the water and into the bowls. The udon water was believed to have healing qualities. In modern times, the people from Kagawa still practice a similar ritual of eating udon in the bath when they renovate their homes. And please remember to slurp the udon quickly—no chit-chat or phone calls to interrupt the meal. The udon continues to cook in a hot broth and will lose its ideal texture if one tarries.

When making udon, we discovered a few tips. The dough should be on the dry side and shaggy—with resting and kneading, the dough will hydrate and become smooth, silky and elastic. Before stomping, put the dough in a doubled heavy-duty plastic bag before stepping on it with stocking feet, not shoes. If you find the dough is difficult to roll because of its elasticity, alternate between the two pieces of dough, rolling one while the other relaxes. The dough should be ⅛ inch thick; the noodles will expand when boiled. And unlike most fresh noodles, udon requires lengthy cooking—about 15 minutes of boiling—to attain the correct springy texture. 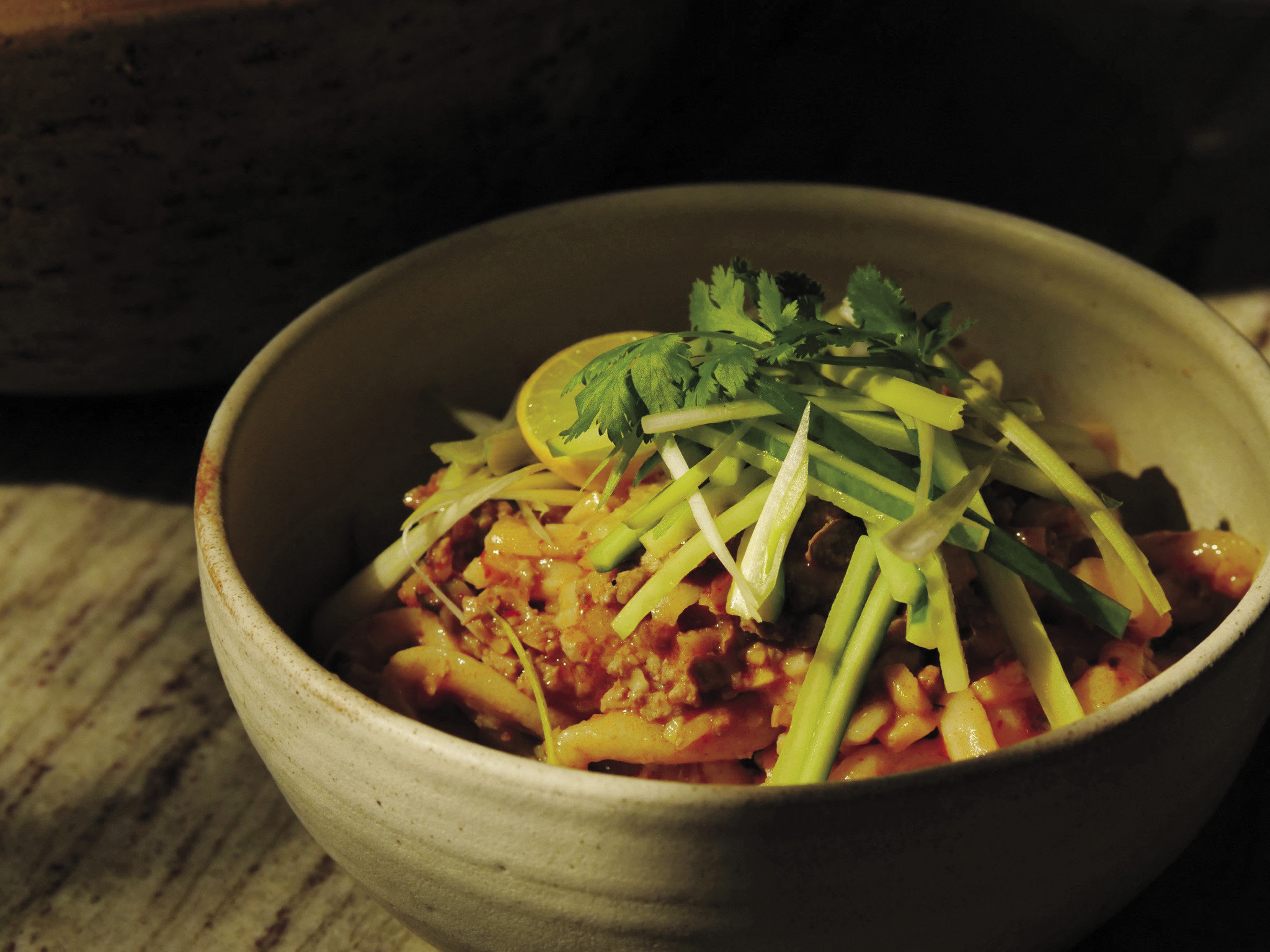 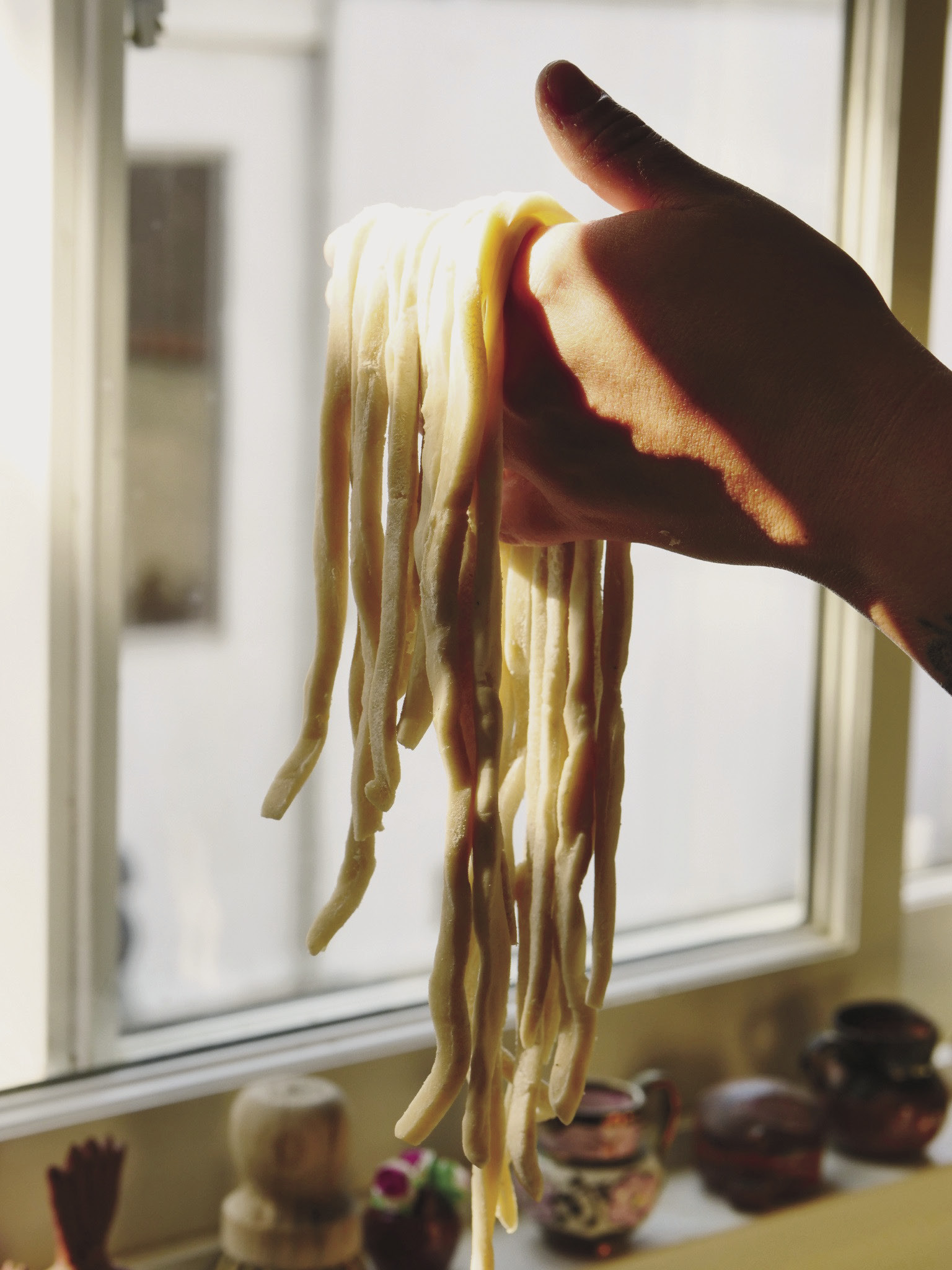