In Tashkent, Uzbekistan’s capital, the streets are lined with paddle-wielding chefs called oshpaz. They expertly tend to the sizzling contents of enormous cauldron-like pans called kazan. These pans fill the air with the aroma of frying meat and vegetables, all blanketed in snowdrifts of rice that steam atop the other ingredients.

This is plov, a hearty pilaf that is the national food of Uzbekistan. It’s also much more. “Cooked correctly, plov is beautifully aromatic, steaming and almost melting in the mouth,” says Caroline Eden, author of books including “Samarkand” and “Red Sands,” both of which document her travels through Uzbekistan. “It is served almost everywhere in Central Asia, but the Uzbeks are the self-proclaimed masters of plov,” she says.

The dish is assembled and cooked in layers: Browned meat is topped with sautéed aromatics and carrot, then with rice. But before any of that, the rice is rinsed, then soaked, to rid the grains of excess starch and ensure they cook up fluffy and tender.

“At its most basic, plov is rice, onions and carrots with either lamb or beef,” Eden says. “But for Uzbeks, it represents hospitality, community and identity.” Lore holds that the fate of a marriage depends on the quality of the plov served at the wedding. And the appetite for plov is seemingly bottomless: Eden notes that a 2017 cook-off near Tashkent produced four tons of plov, feeding a crowd of over 22,000.

Variations on the dish abound throughout Central Asia, some made with chickpeas, some with meats like duck or fish, others scattered with quail eggs. Dried fruit—such as raisins, quince or even tart currant-like barberries—often lend a touch of sweetness. On occasion, it’s wrapped up in buttery, golden layers of lavash for “shah plov,” so named for its resemblance to a crown.

In our version of plov, we strove for simplicity: We start by browning the meat—in this case, boneless beef short ribs—creating a savory fond that imparts depth. We then stir in spices and aromatics. In a classic touch, we finish cooking the beef with an entire head of garlic; the soft, steamed cloves are later squeezed into the rice. Tender carrots and raisins add sweetness.

As for the rice itself, after several tests, we found soaking and rinsing the rice was indeed the key to light, fluffy basmati. That’s because, straight from the bag, white rice is coated with a powdery layer of surface starch, the result of the grains being “polished” to remove their outer hull. Without soaking and rinsing, that extra starch creates sticky, gummy rice. Soaking also hydrates the grains, solving for the all-too-­common pitfall of underdone rice.

To finish the dish, we stir in chopped parsley and sprinkle on pomegranate seeds for bursts of color and fresh flavor that complement the richness of the rice.

Visitors line up for a taste of plov in Tashkent. 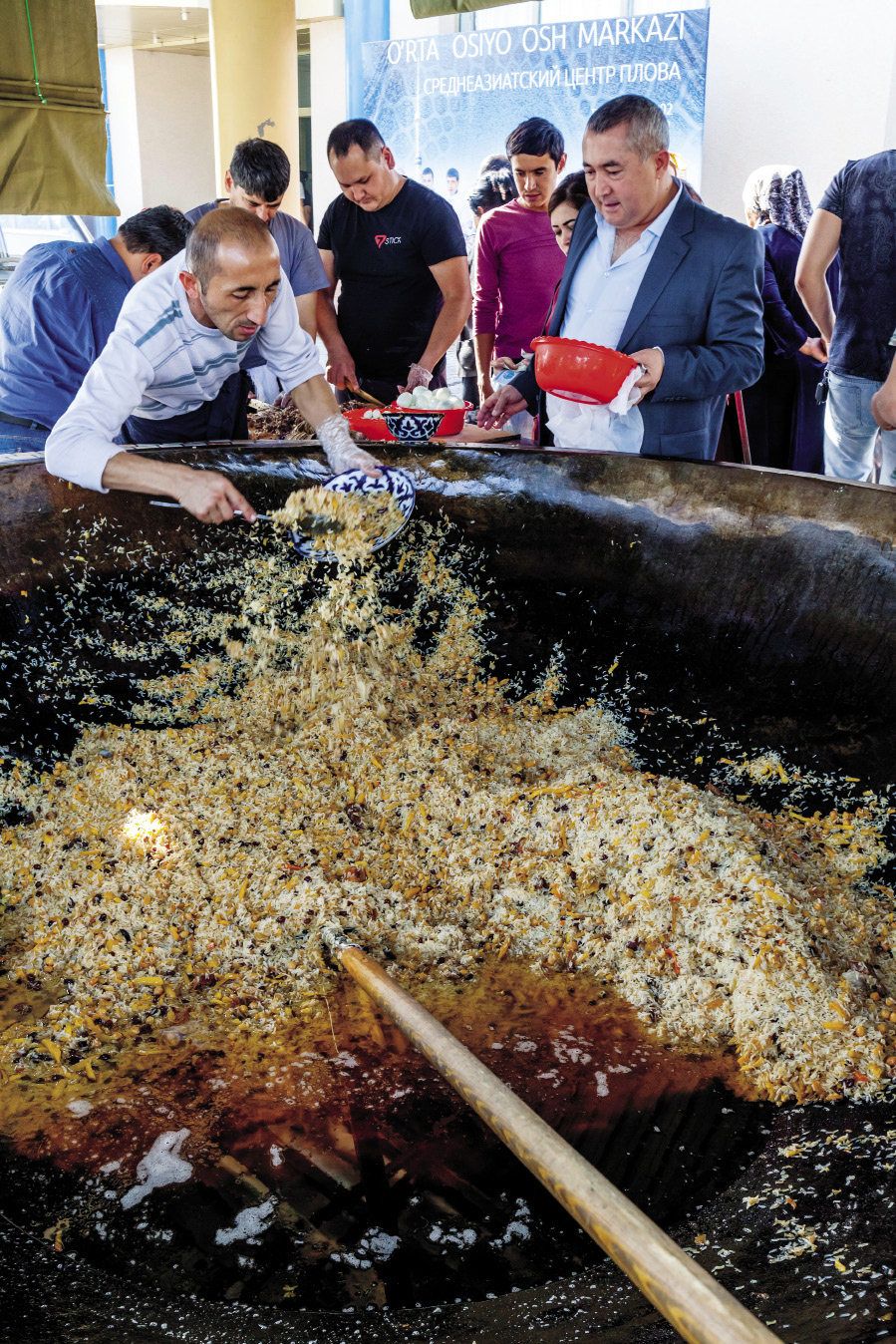 Brazilian Black Bean Stew with Pork and Beef
Stomp It! Cut It! Boil It!
Small Bites from Milk Street
A Simple, Seeded Flatbread Is at the Center of the Moroccan Table