In Search of the World’s Crispiest, Lightest and Most Flavorful Falafel | Christopher Kimball’s Milk Street

Walking the many hills of Amman can feel an exercise in the monochromatic. Terraced waves of sandstone buildings arch upward to the peaks that ring and crisscross the Jordanian capital, wave upon wave of browns, yellows and tans, the sandy ground blurring into buildings that stretch seemingly without definition until finally they brush a ravenous blue sky.

But that homogeneous cityscape belies a Technicolor riot of aromas that circle, surround, entice and linger as you meander. For this is a city that most truly comes alive initially on the nose. Later on the tongue.

Then from shops like Ragadan Bakeries, where some 20,000 loaves of pita a day trundle through a conveyor-driven oven, puffing and enshrouding the street outside in yeasty, wheaty warmth. Mahmood Rashed’s family started the business in 1952. He’s been working there since he was 10 and he smiles as the scent draws customers in lines dozens deep.

Also from the piston-driven tanks of Rasheed Barakat’s Jordanian Press, where vats just off the street churn 150 kilograms of sesame seeds over gentle heat for hours, slowly toasting them as they release a creamy-savory steam. The next day, they will be ground into tahini, Jordan’s ever-present condiment, some of it sweetened to create blocks of crumbly halva.

And of course, from the immense pots of frizzling oil that dot every street. Savory richness emanates as men with spring-loaded wands pop pucks of seasoned ground chickpeas into them. The rounds disappear momentarily, then bob to the surface, crackling and brown. With the swish of a mesh scoop, the crispy falafel are dredged from the pot to serve.

This is the smell—nutty, spiced and savory—that draws school-bound children each morning to buy brown paper bags filled with a breakfast of fresh falafel. This is the smell that draws workers at lunch, who feast on those same chickpea fritters, now wrapped in doughy pita bread, drenched with tahini, labneh and lemon, and topped with a mess of pickles and salad.

And this is what brought me to Jordan, a country at the crossroads of Europe, Asia and Africa. I’d come to learn falafel, a food that deliciously unites all those tastes and aromas—the spices, the bread, the tahini. A food so ubiquitous and vital to this country’s cuisine and culture, the government won’t tax the shops that sell it, ensuring its affordability.

At its most basic, falafel is a deep-fried fritter made from beans, herbs and spices. Most of the Middle East makes it with chickpeas. In Egypt, it’s fava beans. Now and again, you’ll see blends of both. I’d come to Jordan because the nation’s history as a hub for Arabs from across the region means culinary traditions have meshed, wonderfully so.

Jordanian falafel also is famously delicious—assertively seasoned, shat­ter­ingly crisp outside and pillowy light inside. All of which is terrifically contrary to my mostly disappointing experience of falafel in the U.S. (including my own lackluster attempts to make it at home). That is, dense balls of bland ground beans that spent way too much time in way too much oil.

My education begins early morning at Restaurant of Damascus Hill, a tiny no-seat shop on a residential corner where Syria native Abu Omar has been frying falafel for decades. He hands me a Dagwoodian take on it: a tender 6-inch pita bread spread with hummus, then topped with three plump falafel, pickles, salad of tomatoes, cucumbers and tahini sauce, roasted florets of cauliflower and eggplant, then hot sauce and hard-cooked egg. Want french fries tucked into it, too? he asks.

I decline the fries and try to eat the laden bundle, some of it landing on my feet. But it is undeniably delicious. The toppings add tons of flavor and texture, of course, but the star by far is the falafel itself. As expected, the outsides crunch to reveal a steaming and tender interior, green with herbs and fragrant with spice. They are pleasantly substantial, but not heavy.

Omar invites me into the kitchen to see how it’s done. Unlike for hummus—with which falafel often are served—the chickpeas never are cooked before they are fried. After soaking in water overnight, the beans are drained, then combined with seasonings. This varies by cook, but for Omar it includes green peppers, fistfuls of fresh parsley, cumin, ground ginger, garlic, salt and—a surprise ingredient—baking powder.

From there, the mixture is fed into a belt-driven meat grinder, from which emerges a ground beef-like blend of yellow and green, as well as a delicious herbal-garlic aroma. Moist, but not wet, the batter is mixed before Omar hands it to his cook. In rapid-fire succession, the man scoops it into a falafel kaleb, a spring-loaded mold, forming perfect rounds and ejecting them one after another into a deep vat of oil. In minutes, the waiting children grab their bags and head to school.

At falafel stands across Amman, chickpeas, herbs and spices are freshly pulverized in meat grinders each morning before being shaped and fried. 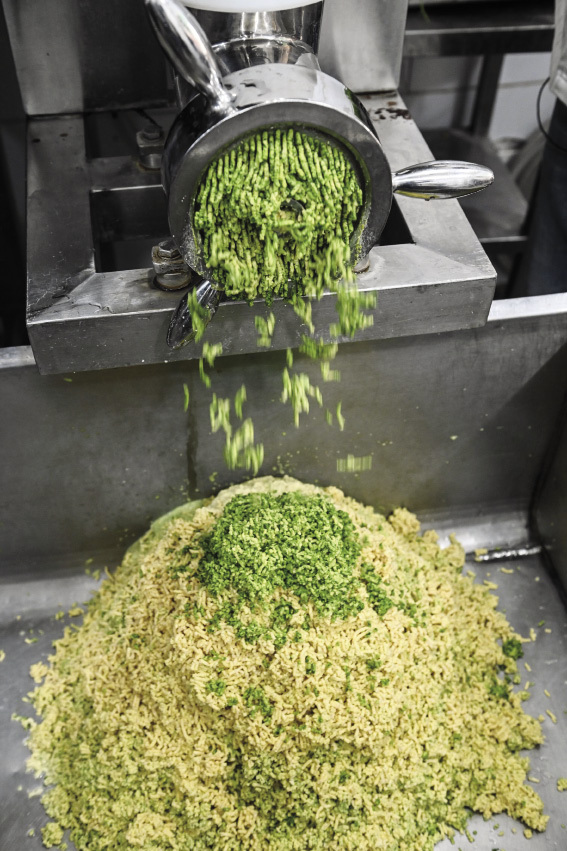 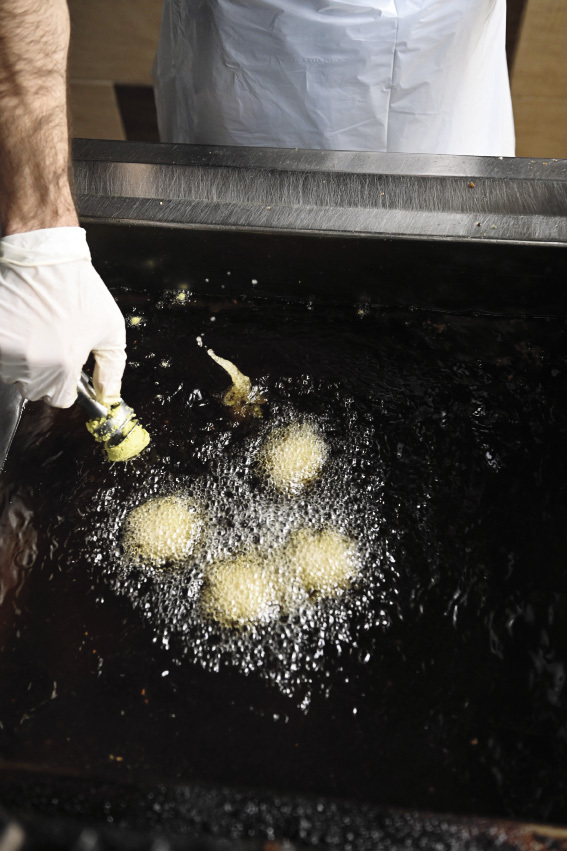 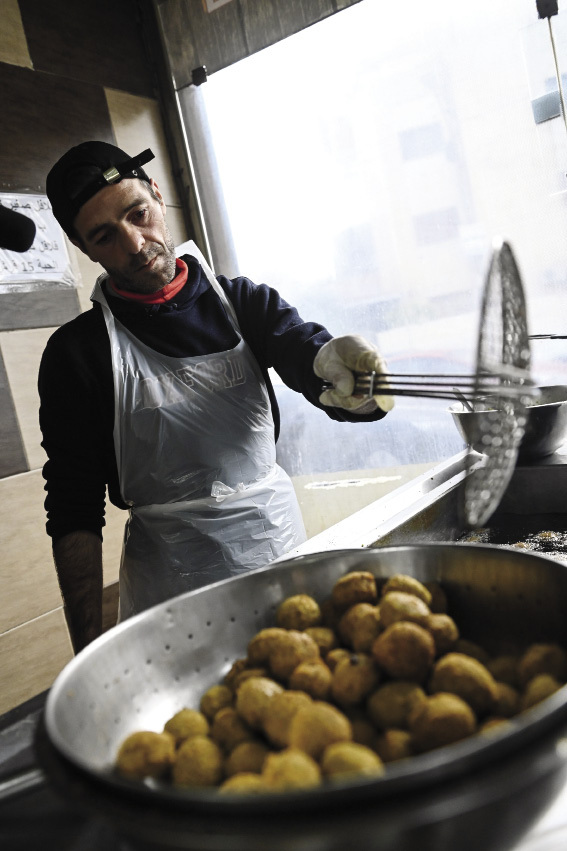 Over the course of the week, I eat many falafel in many shops. Ingredients vary, though not by much. Some cooks favor baharat over individual spices. Some use more or less parsley, others add cilantro and/or lemon juice. But the soaking, grinding and frying always are the same. As are the leavener and sauce. Both are key.

Let’s start with the latter. Often called the Holy Trinity of Arabic cooking, it’s simple, and in that it’s spectacular. Tahini, lemon juice and yogurt. You will get some variation of this with nearly everything, especially falafel, sometimes on the side for dunking, sometimes sloshed over. It’s creamy, citrusy, savory and the perfect foil for the richness and crunch of deep-frying.

As for the baking powder, it’s always used. Except when it’s not. Some cooks opt for baking soda. Different ingredients, same purpose. It’s one of the hallmarks of Jordanian falafel. The leavener—whether reacting to the liquid (as in baking powder) or the acidity (as in baking soda)—is the key player in creating the airy, light interior we love about these falafel.

Still, every batch I’d seen was prepared the same. Massive quantities churned through monstrous meat grinders, then fried in vats of oil. Scaled for volume, of course. But often, those techniques don’t replicate well when downsized. Plus, few home cooks have or will use a meat grinder. Even fewer relish the idea of firing up a tankard of oil.

As ever, for a home cook solution, ask a home cook. Though falafel is considered an inexpensive fast food eaten on the go, it is also something most families prepare at home at least once a week. And that’s how I meet Rawan Mohamad Abuead, a home cook and culinary school graduate who modernizes classic recipes to be more approachable.

Her falafel is a fine example. Most of the process is the same, with a few important exceptions. Rather than a meat grinder, she uses a food processor to not quite puree most—but not all—of the chickpeas. The rest are added at the end and just roughly chopped. The result is a batter that is wonderfully creamy and still slightly—pleasantly—granular.

She also took the most robust hand we’d seen with seasoning, adding ample baharat, which can contain dozens of spices and dried herbs. This lent the falafel deep, warm flavors that perfectly balanced the tahini sauce. Also, she did something we saw nowhere else—she garnished them with yet more seasoning: tangy sumac, earthy cumin and crunchy sesame seeds, all of which bloomed in the heat of the freshly fried falafel, perfuming the air.

Finally, that frying. Though we ultimately got more reliable results by deep-frying our falafel, Abuead demonstrated that there is flexibility here. She shallow-fried her falafel in a tiny skillet in a bare amount of oil, just enough to lightly bathe and crisp them. Tucked into a warm pita, drizzled with lemony-­creamy tahini sauce and finished with more spices, they were terrifically crispy and tender.

They were, in fact, a wonderful amalgamation that came alive first on my nose. Then my tongue. 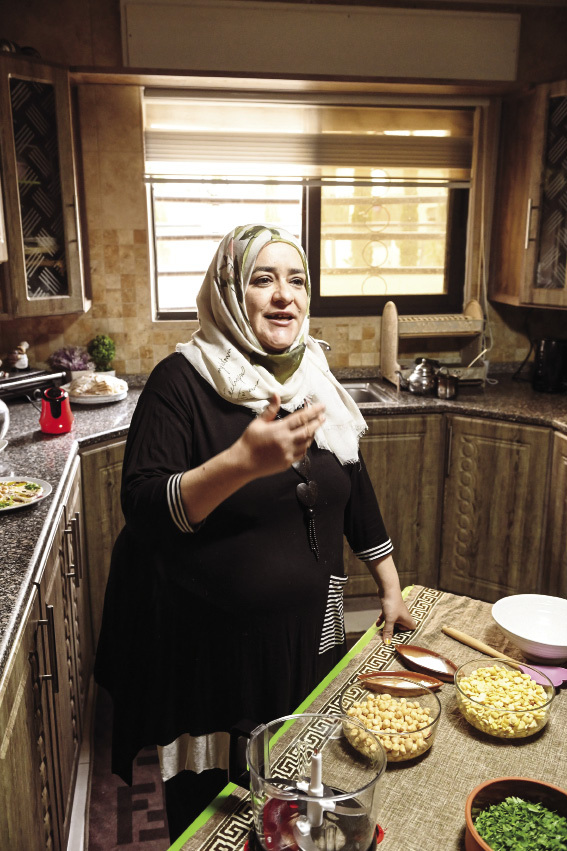