Mexico City by night is an aromatic embrace, each neighborhood gloriously steeped in a different magic that wafts and entices. Residential streets with masses of deep purple jacaranda flowers bursting overhead smell of honey, ivy and rain. Keep walking into the busier city center and floral gives way to the savory sizzle of meat, pops of lime and toasting tortillas.

And though the flowers fade, a sweetness persists. On this evening, it emanates from a cart—one of the city’s innumerable street food vendors—overseen by Jonathan Herrera. A pile of shucked ears of corn bulging with plump kernels, mounds of limes, jugs of chili sauce, chunks of salty cotija cheese and—the source of the sweetness—a cauldron of corn kernels.

To make his point, he ladles the buttery, almost soupy hot kernels—smelling equally sweet and savory—into a cup smeared inside with a bit of mayonnaise. On top, assertively pungent chili sauce, a shower of grated cotija and an ambitious squeeze of lime juice. A spoonful is an explosion of sweet and creamy corn, tangy citrus, briny cheese and chili heat.

Herrera—who started selling this classic Mexican street snack when he was 10, helping his mother and grandmother some 20 years ago—was right. With so many bold strokes of contrasting flavors and textures, it’s intensely and ridiculously delicious. Chewy and cheesy, bright and savory, creamy and sharp.

It’s easy to imagine esquites as a side to anything, though I’d gladly eat it on its own. For a home cook-friendly version, I turned to Jorge Fritz and Beto Estúa—husbands who run Casa Jacaranda cooking school in the city’s Roma Norte neighborhood. It was simple—corn kernels cleaved from the cob and simmered with butter, water and a serrano.

With one problem. Key to the flavor is epazote, an herb common in Mexican cooking with notes of oregano, anise, citrus and mint. Fritz and Estúa minced a full ¼ cup of it. It can be difficult to find in the U.S., so we considered options, eventually settling on substituting a mix of basil and parsley. It doesn’t deliver quite the same earthy flavor, but it nonetheless lends solid herbal notes that balance the corn’s natural sweetness.

After that, the rest follows Herrera’s lead. The result honoring the most delicious thing to try in Mexico City.

Jonathan Herrera has been selling his family’s esquites since he was 10. 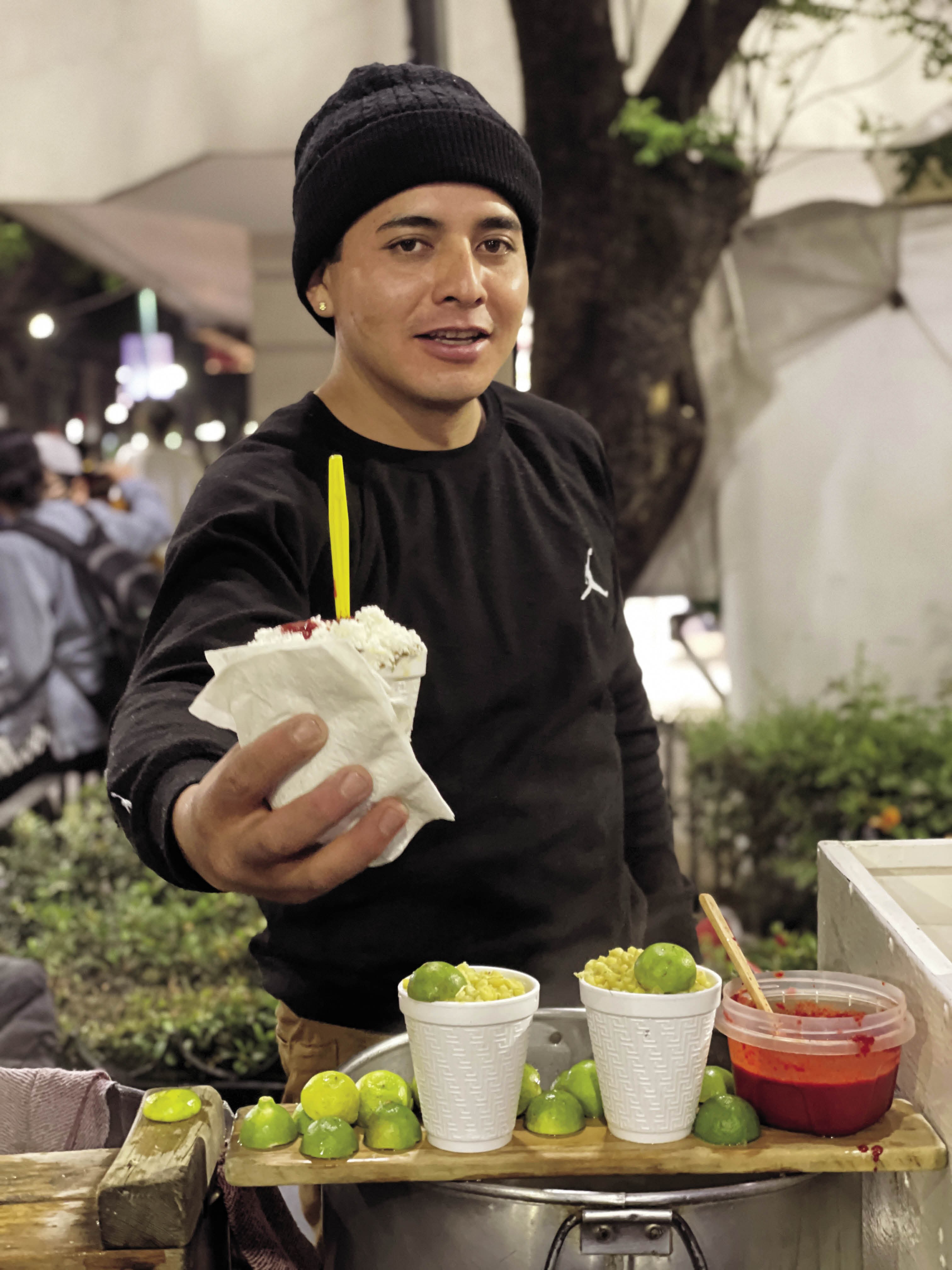