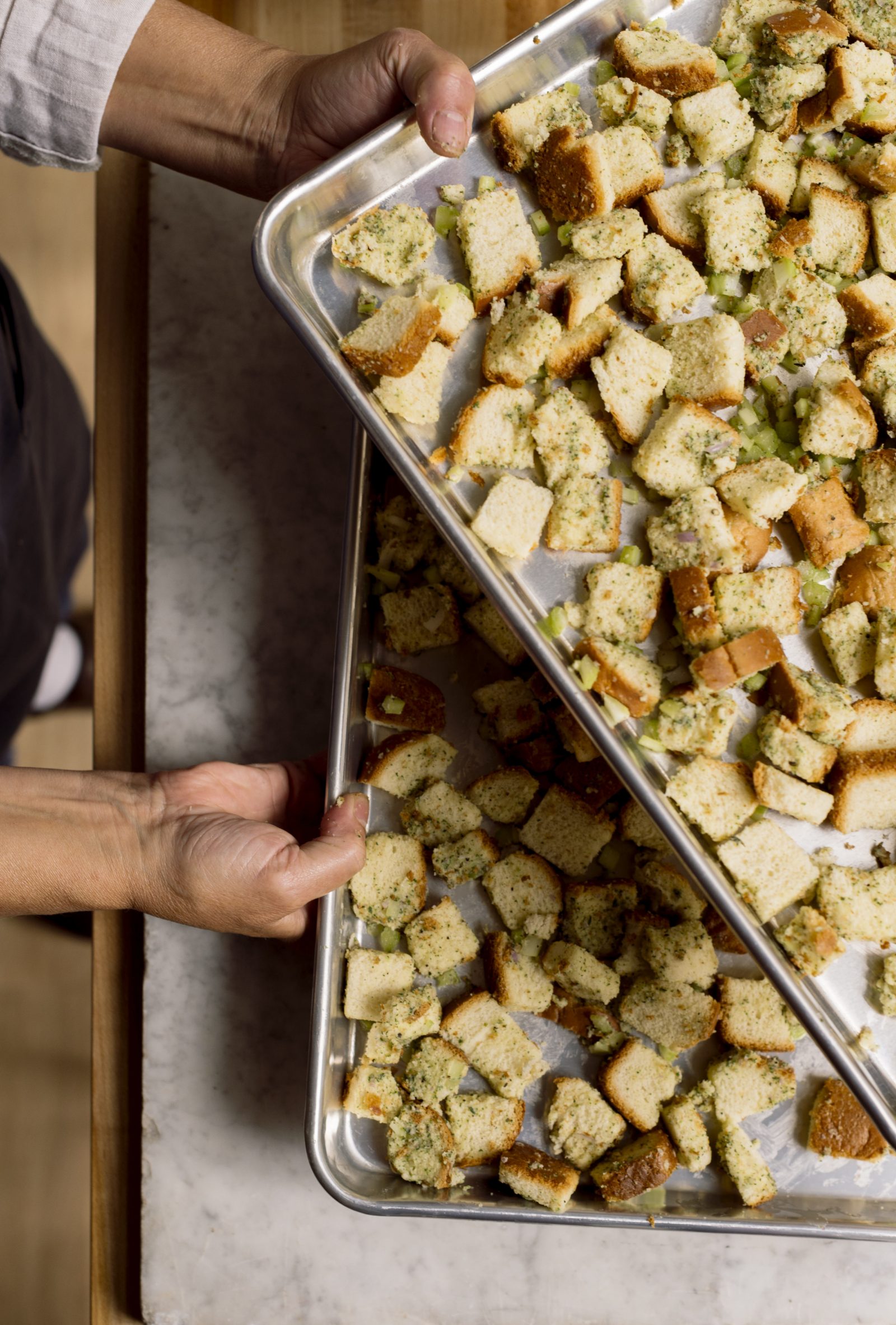 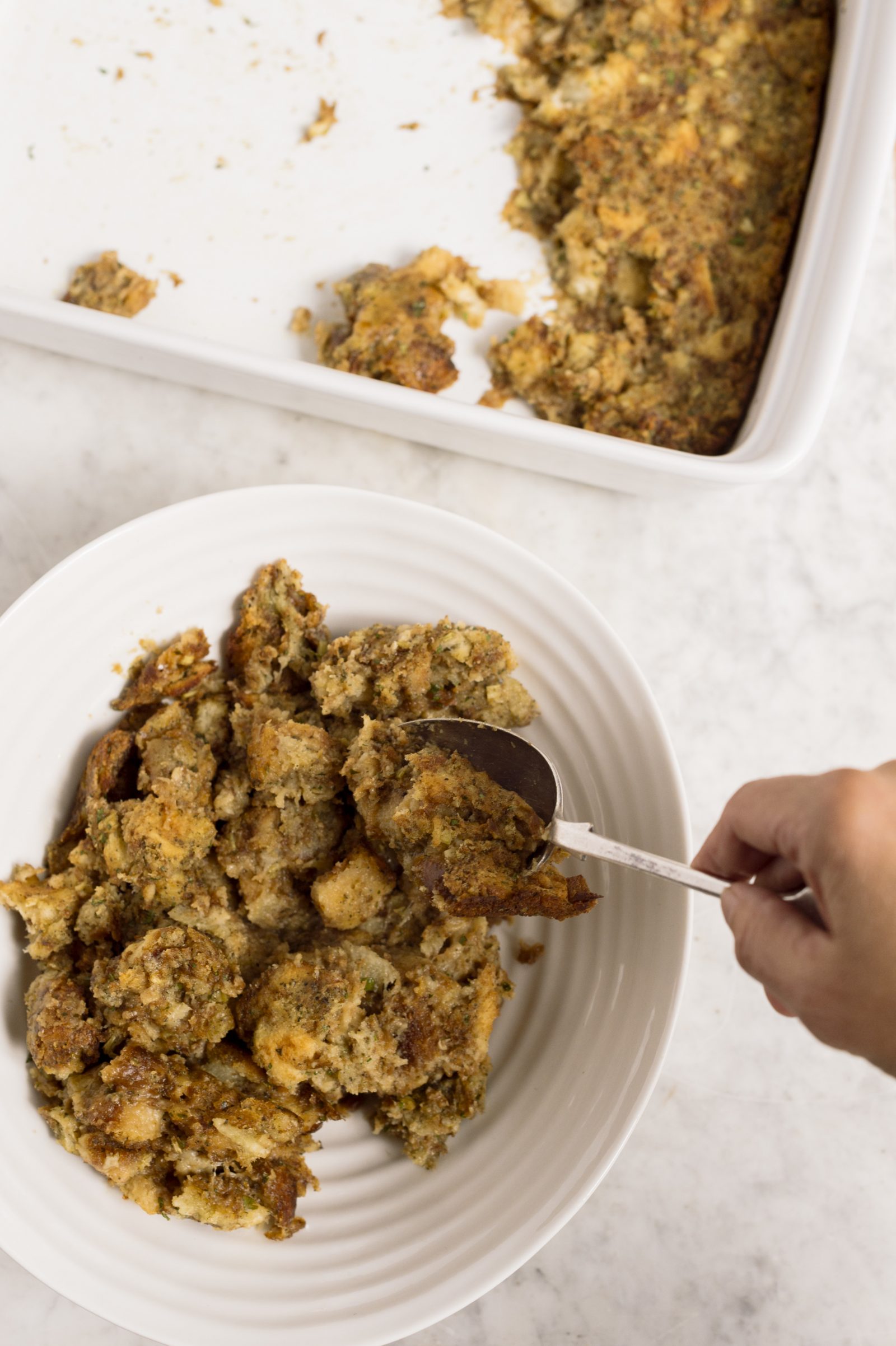 Let’s face it, stuffing is basically a flavorful sponge to soak up gravy and any stray melting butter that escapes a vegetable. But mincing and sautéing the aromatics that help turn bland bread tasty is a chore. We speed things up – and maximize flavor – by giving butter, fresh herbs and raw shallots a whiz in the food processor, then using the resulting paste to season bread cubes while they toast in the oven. We found that any sturdy, high-quality sliced sandwich bread from the grocer worked well here. As the bread bakes, the raw bite of the shallots cooks off leaving behind a mellow tang. Chopped celery is tossed with melted butter and mixed into the bread, softening as the cubes toast. The mixture then is moistened with chicken broth and a touch of cream before being baked to create a relatively carefree stuffing that will satisfy the even strictest traditionalists.

Reviews
Katherine S.
My favorite stuffing ever!
Making a paste for the stuffing is a game changer. It makes so much sense, and you could make many different variations.
Ken L.
Volume of Bread Would be Helpful
I&#x27;m preparing this now and see the 2020 request for volume of bread and the answer that a 1 1/2 pound loaf would suffice. To me, as a home cook, that&#x27;s still somewhat vague since different loaves of white bread have different densities. For example, I bought a fresh white loaf from the local shop with a thick crust, which I&#x27;ll remove. Is there a general guide here? 6 cups of bread? 8 cups of bread?

A loaf of hearty white sandwich bread (Arnold or Pepperidge Farm, for example) is 1 1/2 lbs.

I used pre-toasted bread and was able to skip the first 50-60 minute bake. It turned out beautifully! Tender, even texture. Maitake mushrooms were also a nice addition.

Crowd pleaser! You don't have to worry about the sausage and/or mushroom haters. We had a Milk Street Thanksgiving and this was the favorite recipe hands down. Plus the aroma was a welcome relief from the smell of cat food reference in my brown ale turkey review.

This is a great recipe-make extra bread, as you will not be able to stop snacking on the cubes when they come out of the oven. Be warned though, when you take the lid off of the food processor the shallot mixture is strong-it made my eyes water!

Five star recipe! I made this for the first time, and it was the side dish that disappeared the fastest at my Thanksgiving feast. The flavor, texture, and seasoning level were unworldly! I made it up to Step 2 the day before the feasting, which helped tremendously. I was initially worried about the amount of Kosher salt used, and it didn't make the stuffing overly-salty at all. I used the organic, low-sodium Better-Than-Bouillon chicken base for the broth. Definitely a keeper, and will be always offered for any future feasts.

Excellent recipe. I make it every year with the brown ale turkey recipe. This stuffing is gone in a heartbeat. No left overs ever!