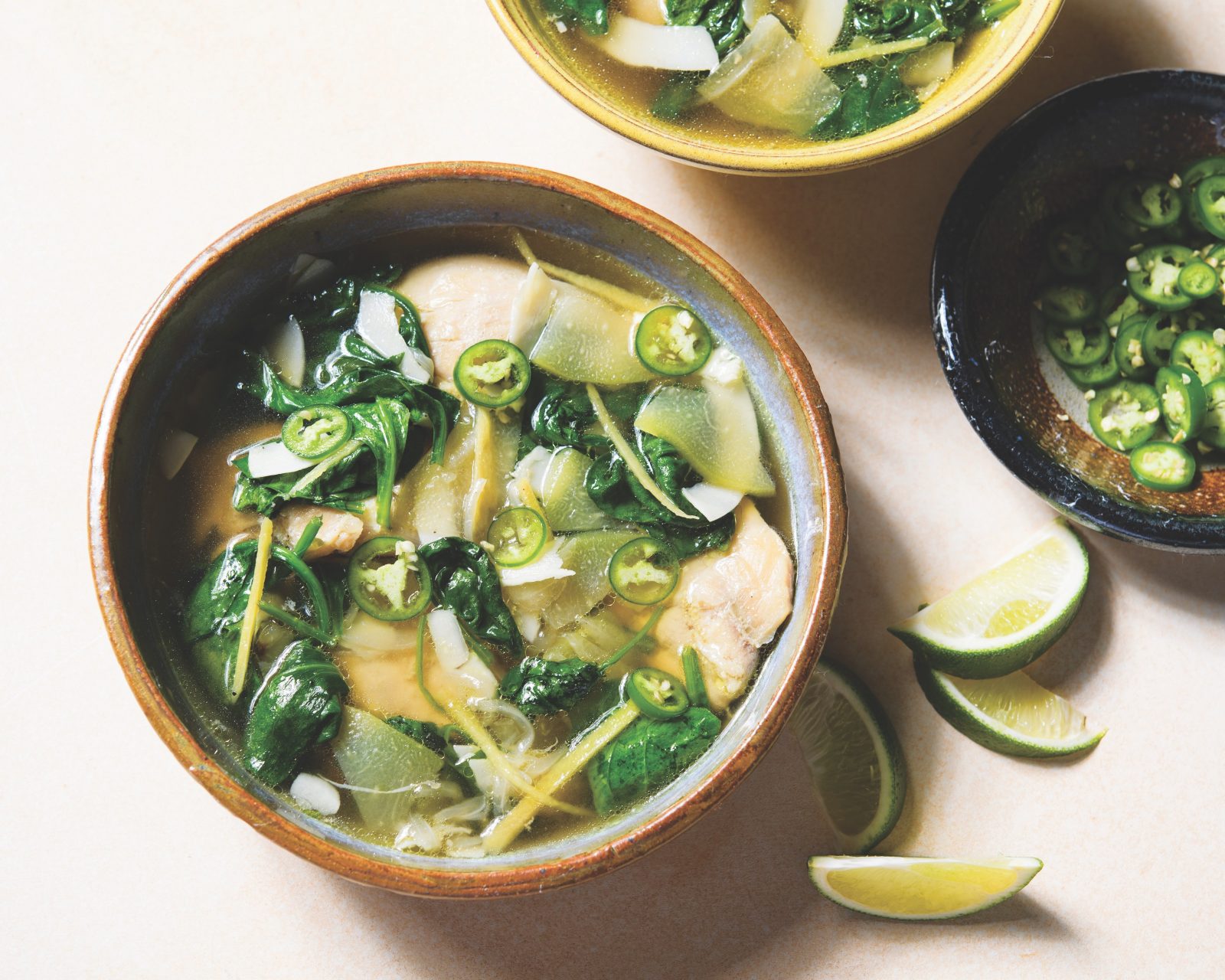 This recipe is our adaptation of Filipino chicken binakol, a brothy, chunky soup with coconut, ginger and lemon grass that’s said to come from the Western Visayas region of the country. The juice and meat of buko, or young, green coconuts, is a traditional ingredient, but we were happy to discover that two widely available substitutes—coconut water and dried wide-flaked coconut—yielded delicious results. And in lieu of a whole chicken cut into parts, we opted for boneless thighs that cook more quickly but still boast rich, meaty flavor. Some versions of the soup also contain firm, crisp-textured green papaya and/or chayote squash; for ease, we opted to add only chayote. Also known as mirliton (particularly in Louisiana), the pear-shaped, bumpy-surfaced edible gourd is much easier to source than green papaya and has a similar texture, flavor and color. If chayote is not available, chunks of zucchini or yellow summer squash offer different characteristics but also are satisfying. Binakol often is finished with dahon ng sili, or the leaves of chili plants, but we wilt in baby spinach. Serve with steamed rice.

Don’t use coconut water that contains added sweetener. A small amount of natural sugar is normal, but check the ingredients listed on the label for added sugar. Be sure to use dried wide-flake coconut, not dried coconut in small, fine shreds. Also make sure it is unsweetened.

Reviews
Jennifer B.
Just a bit too sweet
Next time I might skip the coconut water and make it all chicken broth. Was just a bit too sweet for me. Don&#x27;t forget the Serrano peppers and the lime at the end. It tames the sweetness. But a great variation on chicken soup. Served four? More like 14. It makes a ton.

I made this last night and it was excellent. I used my instant pot for the chicken cook, 15 minutes on high with quick release. My only regret was not putting the thick coconut in before the pressure because it remained quite chewy when I put it in with the chayote. Next time I might sub in bok choy for some or all of the chayote and spinach.