From the Mexican state of Yucatán on the Gulf of Mexico, cochinita pibil, in its most traditional form, is suckling pig (cochinita) that has been marinated in the juice of sour oranges and achiote paste, wrapped in banana leaves and slow-roasted in an underground pit (pib). The fork-tender meat is shredded and served with pickled red onions that offer a sharp, tangy contrast that offsets the richness of the pork. There are many simplified modern takes on the dish, including the pressure-cooked version that Jorge Fritz and Beto Estúa, proprietors of Casa Jacaranda cooking school in Mexico City, showed us how to make. This recipe is our adaptation of theirs; we swapped a conventional stovetop pressure cooker for the ultimate convenience of a 6-quart Instant Pot. (If you’d like instructions for cooking in a Dutch oven, see below.) Achiote paste is a key ingredient in cochinita pibil; it’s the source of the dish’s characteristic red-orange hue. We use achiote paste, which is made with the ground annatto seeds plus other seasonings, all compressed into a small, solid brick. Despite its bold, vivid color, annatto is quite subdued in flavor, with hints of earthiness and pepper. Look for achiote paste, typically sold in small blocks, in the international section of the supermarket or in Latin American grocery stores. If not available, a substitute can be made by stirring together ¼ cup sweet paprika, 1½ teaspoons ground cumin, ½ teaspoon granulated garlic, ½ teaspoon dried oregano, ¼ teaspoon kosher salt and 3 tablespoons white vinegar to form a stiff paste. Use in place of the paste called for in the recipe. We sought a substitute for the avocado leaves that Fritz and Estúa blended into the flavor base for their cochinita pibil. We discovered that fennel seeds nicely mimic the leaves’ anise-like nuances. Sour oranges, a common ingredient in Yucatecan cooking, are hard to come by in the U.S., so instead we juice regular oranges, but add a couple tablespoons of lime juice for tartness, stirring it in at the very end to preserve its brightness and acidity. 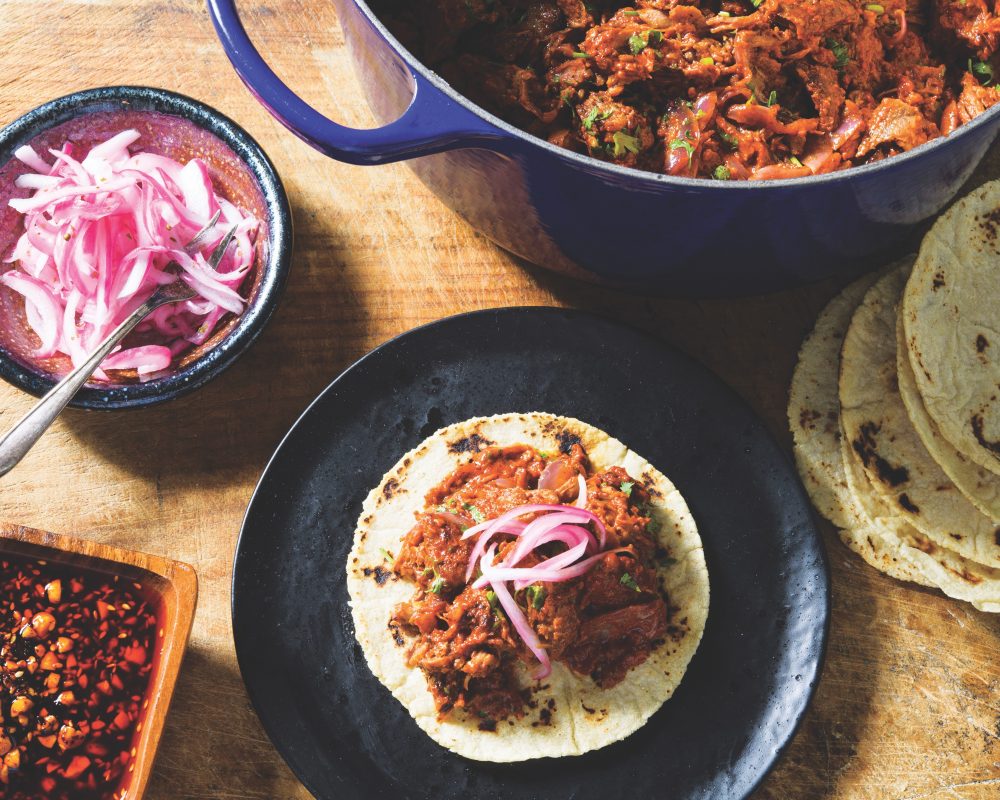 What was the original amount of avocado leaves? I have easy access to dried ones here in TX.

A couple of tablespoons of dried avocado leaves would be our recommendation.

What is the point of browning the onions toward the end of the recipe? The recipe doesn’t say what to do with them after setting them aside.

Do you stir the reserved cooked red onions into the meat?

Do the habañeros go in whole?

We call for the habaneros are stemmed and seeded so they should be cut in half in order to seed them. One halved habanero goes into the Instant Pot and the other goes into the blender and gets pureed with the orange juice and achiote paste.

The onions are browned at the end since the onion that is added with the meat will have broken down in the moist environment of the pressure cooker. We wanted some textural and flavor contrast in the onion. Unfortunately, the instructions for stirring the browned onion back into the skillet were accidentally omitted from the recipe. We have updated the recipe to fix that error. Thank you for bringing it to our attention!

Loved this recipe. Takes a little bit of time, but we’ll worth the effort. Didn’t have access to achiote paste so I used the substitute mixture instead. Will make these again. I figured out what to do with the opinions by looking at the Dutch oven recipe.