A sharper, brighter, and crunchier potato salad from Japan

Getting potato salad right is no picnic. Too often it lacks the acidity or piquancy needed to cut through the richness of the mayonnaise. Our search for a better option led us to Japan, where potato salads are partially mashed to create a creamier texture. And they balance that texture with crumbled hard-boiled egg and the crisp bite of vegetables, such as cucumber and carrots. Tying everything together is Kewpie, a Japanese mayonnaise made with rice vinegar that is smoother and richer than American mayonnaise. We started by looking for the right potato, which turned out to be Yukon Gold. Salting the cooking water ensured even seasoning as did sprinkling them with vinegar and black pepper as they cooled. Waiting until the potatoes were at room temperature before adding mayonnaise was important to avoid oiliness. We used American mayonnaise but approximated the Kewpie flavor by increasing the vinegar and adding an extra hard-cooked egg yolk and 1 teaspoon sugar. For a savory touch, we added diced ham and finished with scallions. 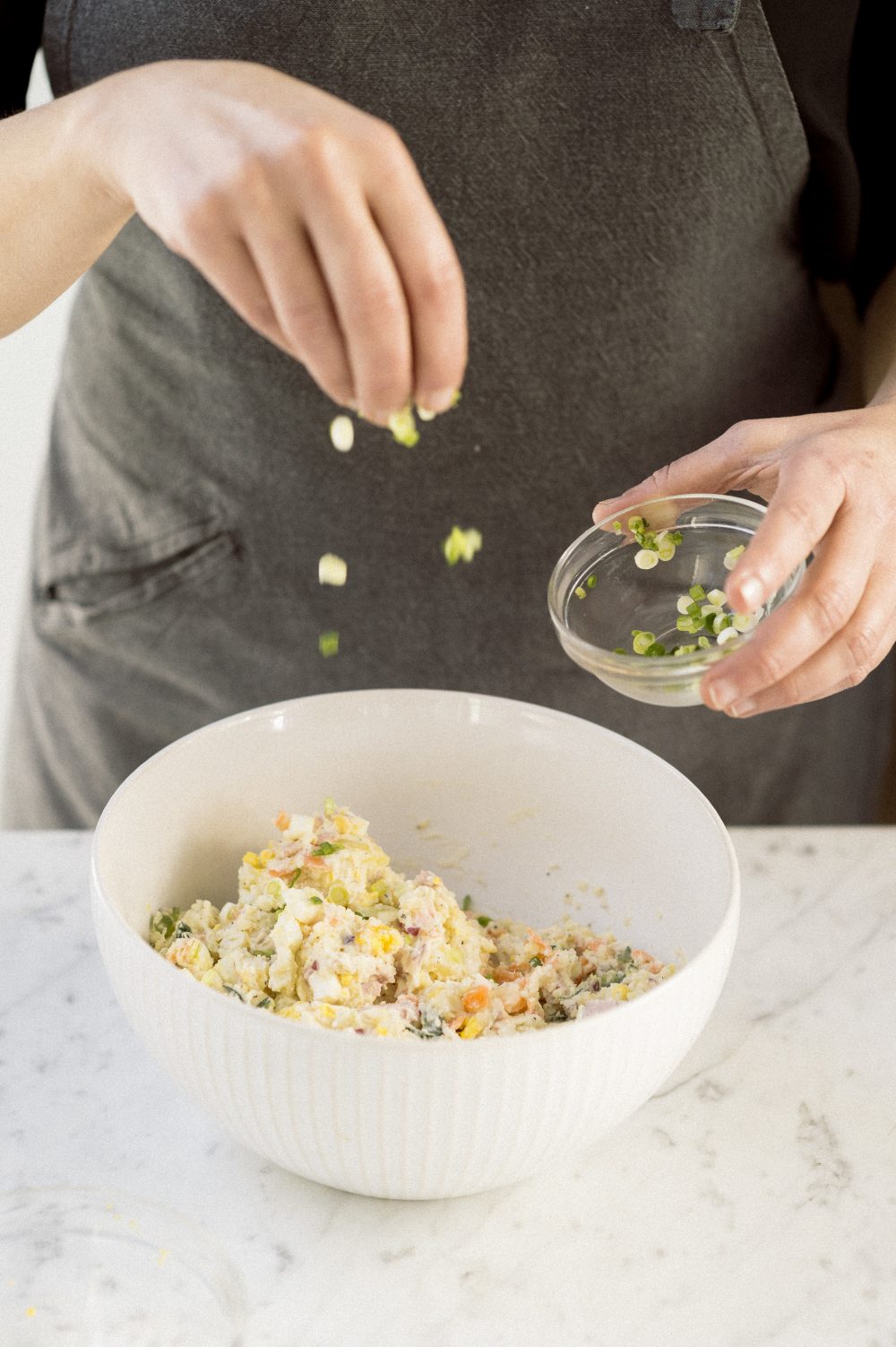 Reviews
Nadine L.
Love this twist on potato salad
The carrot and cucumber added sophistication and crunchy textural contrast to this tasty recipe. This was lighter than your typical North American mayo based potato salad in a good way. I might be inclined to omit the sugar and add a smidge more rice vinegar because I love acidity. However, if you make the recipe exactly according to instruction you won&#x27;t go wrong. Excellent.
Laura C.
Fantastic, as advertised
The rice vinegar makes it fabulous. I did have to sub in red bliss but it’s still delicious and no one will know it could have been creamier. The white potato is good for July 4.
Craig B.
Best Mayo-Style Potato Salad
Amazing mayo-style potato salad. Great replacement for American mayo-potato salads.
Shefa B.
The Only Potato Salad We&#x27;ll Make!
I thought I had a good recipe and it was but this is FANTASTIC! I can&#x27;t imagine making it any other way. And, by itself, it&#x27;s a meal all its own.

*Appreciated the technique for cooking the potatoes, mashing half, mixing in rice vinegar for prep for this for a great texture at outcome.
*Ratio of mayo to potato was perfect at the end and the ratio of sugar to mayo just right too. (I'm not a fan of Kewpie mayo and I thought this recipe was much better for their substitution for that ingredient in traditional Japanese potato salads...most of which I've been served at Korean eateries.)
*Did not make this with the salted veg. I riffed to use a mixture of fresh veg all in small form - grated carrot, small julienned radish, fine diced sweet onion, peeled and fine dice celery, fine chop parsley - along with the eggs and ham and the scallions to finish top per recipe. Result was a good amount more veg by volume than as recipe was written but even at that the mayo proportion as written was just right. And the veg were crisper texture for given they weren't first salt cured.
*Modified from as written but it was delicious and will go to 'keeper' file. Although next time I would be happy to omit the ham. Or maybe leave it in and omit one or more of the other veg and add in some peas to partner with ham and onion and celery.
*Benefits from being chilled in fridge at least a couple of hours before serving, it is also good made as far ahead as day before and it travels well if you're taking it along to serve elsewhere.
*Last note is my Italian heritage and Italian home raised husband has never appreciated mayo based potato salads on the whole, but he really liked this one, had seconds and wanted the leftovers the next day.

This is a fantastic potato salad recipe, rivaling the best American ones. The only thing I forgot to do was rinse off the vegetables, but even so, it wasn't aggressively salty.