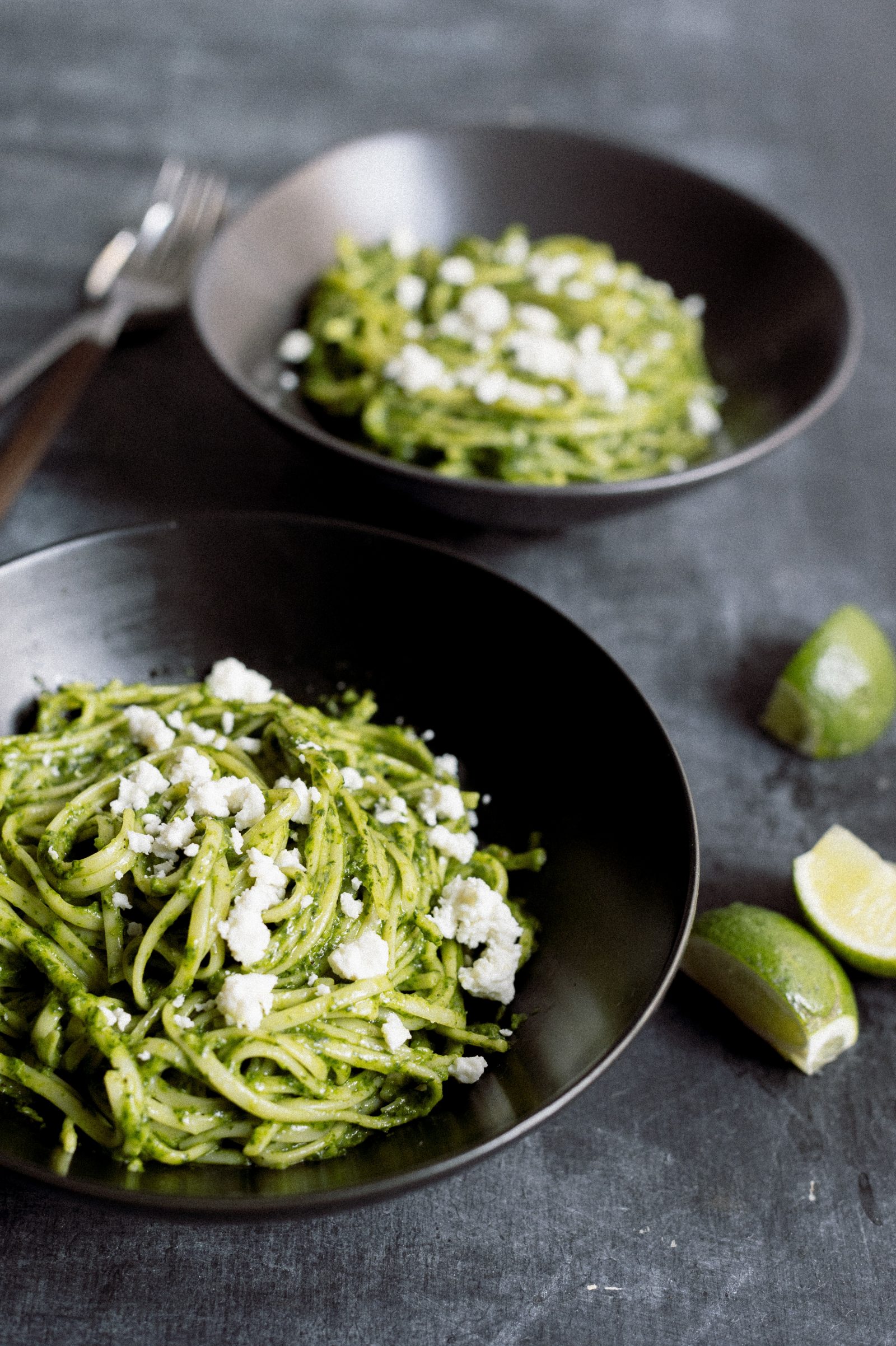 The origin of Peruvian pesto, or tallarines verdes, dates to the 19th century, when a wave of Italian immigrants settled in Peru. Many came from Genoa—the birthplace of pesto—and they adapted the recipe to the available ingredients. A shocking amount of spinach replaces the basil, and crumbled queso fresco supplements (and sometimes entirely replaces) salty Parmesan cheese. “It became a kind of dialogue or maybe a love story” between two worlds, says Gastón Acurio, Peruvian culinary star, founder of the La Mar restaurants, and champion of his country’s food. For bright color and fresh flavor, we pureed ¾ pound of spinach for this pesto, along with onion and garlic. A quick simmer in a skillet took the raw edge off the onion and spinach, giving a depth and complexity lacking in traditional raw Italian pestos. Once the sauce thickened, we added reserved pasta cooking water, followed by undercooked pasta. The starch-infused water gave the pesto body, and the pasta finished cooking in the sauce, absorbing more of its flavor.

Don’t be alarmed if the skillet seems very full after adding the pasta. Use tongs to gently lift and stir the noodles, and a rubber spatula to scrape the edges of the pan.

Reviews
Sandra T.
Peruvian pesto
Came together quickly, luckily I’m not a novice cook. Olive oil is in ingredients but not in the instructions. We both thought it was good, will make again with some modifications. Maybe some crushed red peppers and topped with roasted vegetables.

10/6/2020 - Tuesday Night (to coin a phrase) - I quick browned some shrimp to top this pasta. Really fantastic. I did halve some grape tomatoes and salted them to bring out the juices and then additionally roasted some cauliflower, artichoke hearts and more grape tomatoes to serve along side. I sprinkled the cotija over all and then added the lime. The colors were beautiful and the flavor amazing. I love this pesto as a lighter and iron packed deviation from the basil pesto which I make A LOT. Thanks Milk Street!

This is very good. Some toasted nuts on top are nice. Works with baby kale as well.

Can i make this but use basil instead of spinach or with it?

While you certainly *could* use basil or a combo of basil and spinach that would be more in line with Genovese pesto than Peruvian pesto. We also have a recipe for Genovese pesto which you can find here - https://www.177milkstreet.com/recipes/pesto-alla-genovese.

An excellent recipe, easy to make. I felt virtuous (LOL) eating so much spinach.

This pesto is such a crowd pleaser. It is just as good over roasted veg as it is over pasta and it goes with just about any protein. Can this pesto be made ahead of time and frozen in portions? Perhaps with the addition of lemon to keep things bright?