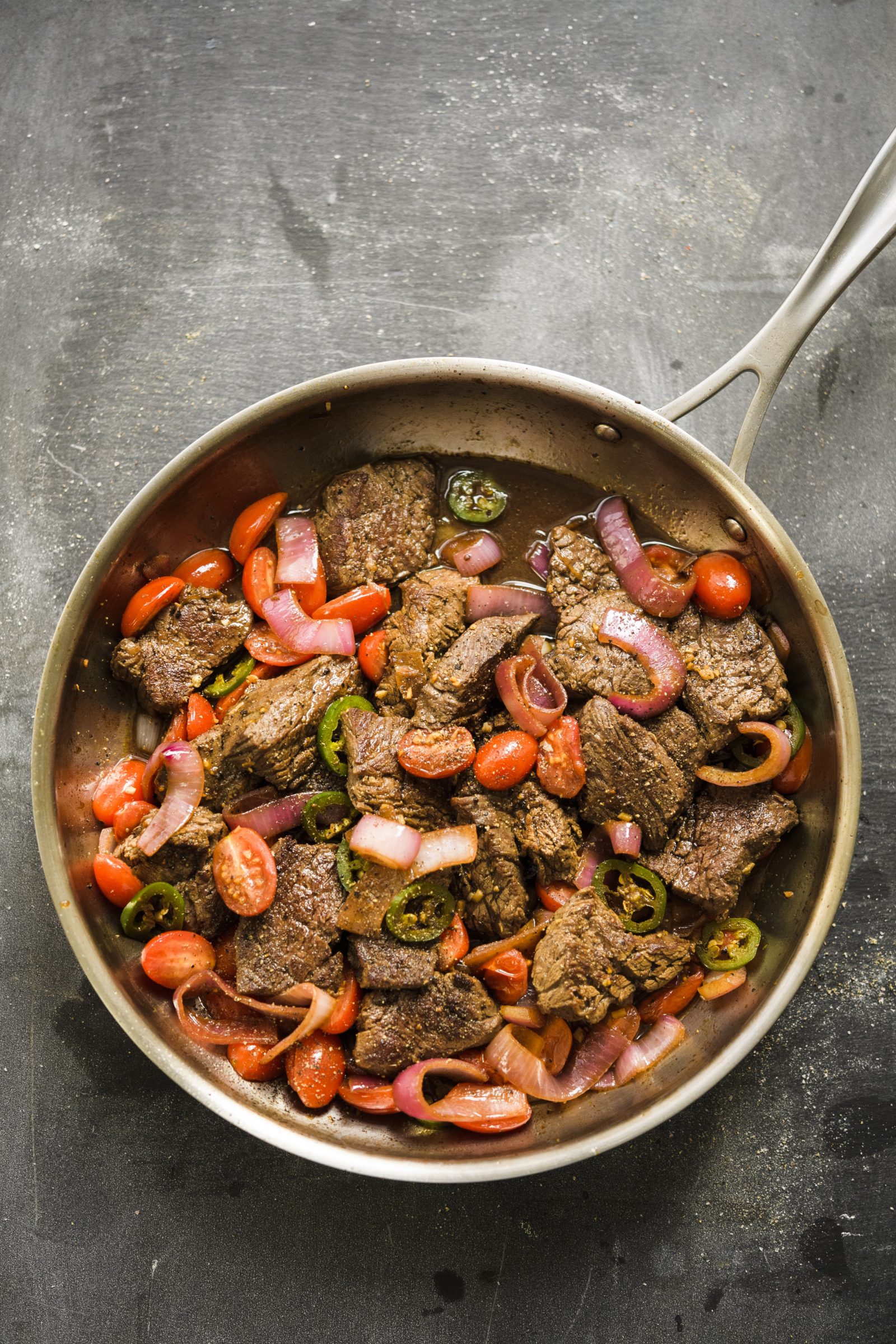 Peru’s lomo saltado, a quick stir-fry of soy-marinated beef, tomatoes and onions, is part of chifa cuisine—Asian-influenced dishes created by indentured Chinese workers in the late 19th century. For our take, we developed deeper flavor by mixing ground cumin into the soy sauce marinade. Tenderloin is often used here, but we preferred sirloin tips (also called flap meat) for their meatier flavor as well as lower price. And we seared the meat instead of stir-frying. Readily available jalapeño peppers made a good substitute for the traditional yellow ají peppers. If you prefer little to no spiciness, halve and seed the jalapeño before slicing it into half rings. Classic lomo saltado is frequently served over french fries; your favorite, frozen or otherwise, would be a good choice here. Steamed rice is an equally good accompaniment.

Don't cook the beef without patting it dry. Marinating in soy sauce adds flavor, but also moisture. Drying the beef helps ensure that the slices sear nicely, rather than steam. Also, cook in two batches; crowding the pan inhibits browning.

Reviews
William W.
Wonderful flavors.
I made this recipe exactly as printed (which is uncommon for me), and I wouldn&#x27;t change a thing. In the past, I have served it with roasted potatoes, and it was a great combination. This time, I had some leftover Mexican rice, so I used that instead, and I paired it with the Milk Street Burmese Tomato Salad. It was simply fabulous!
Raaya C.
Delicious and authentic
I have made this recipe several times now, it is a family favorite. My husband lived in Peru for over a year and visited for long stays many times, he said this dish is the real thing. I even made it with my own garden grown cherry tomatoes, garlic and red onions, really, really good.

I've made this several times it is so much better than the local restaurant version and is really easy. I recommend this recipe.

Made this last night using flank steak, because that's what is easiest to find. It was delicious; I should left the seeds and ribs in the jalapeno as it was milder than I would have liked, but I added red pepper flakes at the table to compensate. Served with white rice and steamed green beans.

This is fantastic. Loved by our kids (three teenagers) and requested often. Infrequently see steak tips/flap meat here in the southeast - flank steak or flatiron steaks are fine substitutes. Alexia frozen fries pair nicely with this.

For MS staff. I can not find sirloin tips anywhere. Is there another name for them?

As mentioned in the headnote of the recipe, sirloin tips are sometimes sold as flap meat, however it can also be sometimes be called bavette steak. If you can't find flap meat you can also try this with skirt, flank, or flatiron steak as some have mentioned in previous comments. These cuts are slightly more lean than flap meat, but should still work fine in the recipe.

This one is a keeper. The flavor was outstanding and kids loved it too. I used top sirloin because it was on sale at whole foods, and meat came out perfect. For MS staff, can you add a few recipes for top sirloin steaks? Often times the sale flier is my inspiration.

Does anybody think this recipe could be adapted for use with lamb? If so would any adjustments to the other ingredients be needed?

You could definitely make this with lamb. If you can't find lamb tips (some places do sell them), look for an equal weight of top round or sirloin chops and cut as instructed in the recipe. Cooking times should be pretty similar.