Rossejat de fideus is similar to paella, but instead of rice uses slender noodles that have been toasted until richly browned. We use capellini pasta (also called angel hair) and break it by hand into rough 1-inch pieces (do this over a bowl to keep the pieces contained). Toasting brings out the nutty-wheaty notes of the pasta, which then is simmered in broth instead of water. You will need a broiler-safe 12-inch skillet for this recipe, as the noodles are first cooked on the stovetop, then browned under the broiler. This dish is traditionally served with aioli, a garlicky mayonnaise; we make a quick, extra-lemony version using store-bought mayonnaise.

Don't use regular paprika. Smoked paprika gives this dish a very Spanish flavor profile. Before broiling the noodles, make sure most of the liquid has been absorbed; too much moisture in the pan will prevent the surface from crisping and browning. Don't forget that the skillet handle will be hot after broiling; use a potholder or oven mitt. 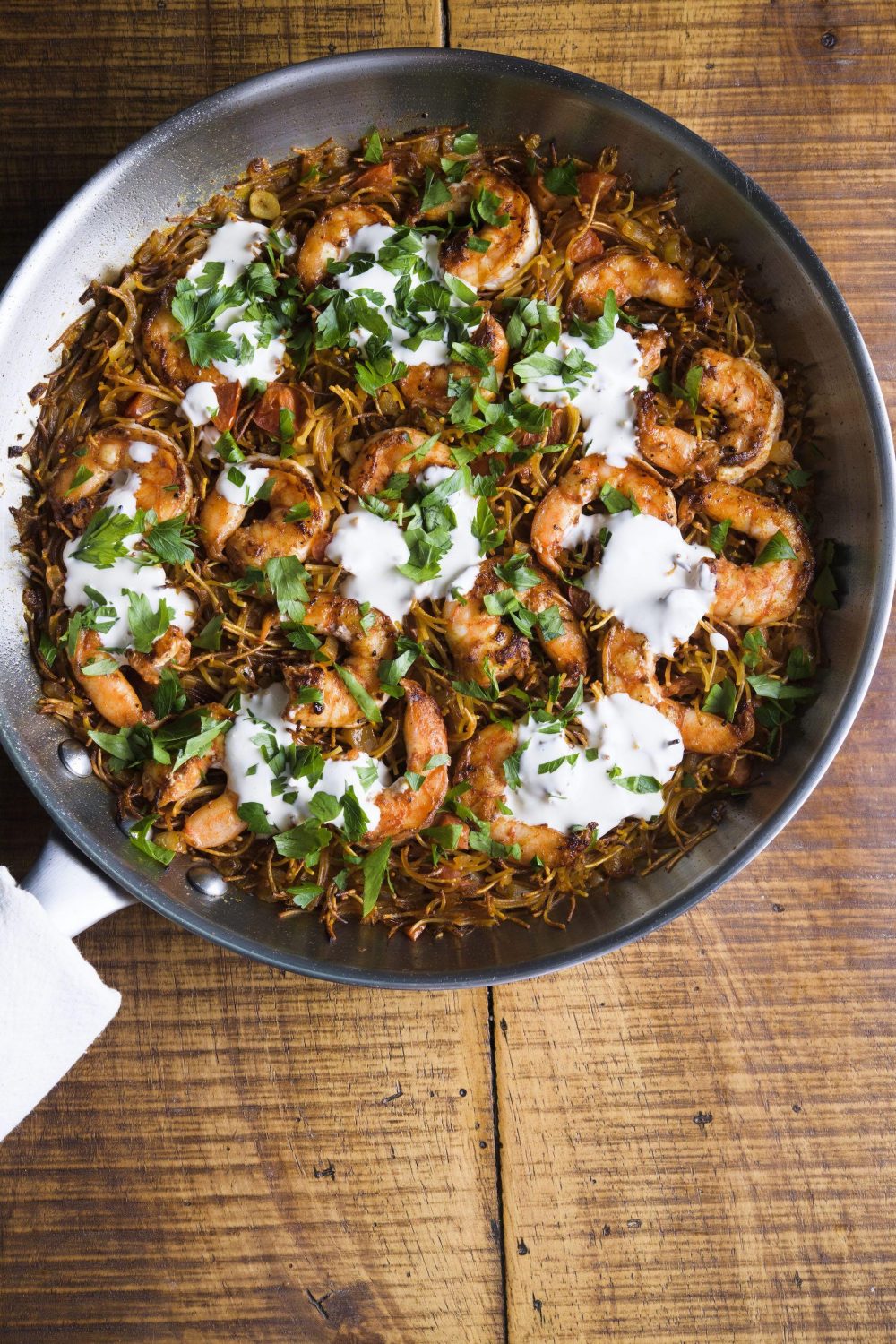 Reviews
Bill O.
This was great
My wife and I just loved it. As with most recipes, I thought the cooking times were too short, so I adjusted visually. After reading the reviews, I minced Milk Street garlic confit into the sauce, rather than using raw garlic. I also added all the sauce to the dish. Will definitely make again.
Michael D.
My mom&#x27;s favorite
I make this at least once everytime I visit my mom. The curled up noodles and the lemon sauce make it unique and fun.
Arlynn H.
Disappointed.
This was just average.

This had a lot of potential but it had a strong aftertaste (raw garlic and large amounts of lemon maybe?) that tasted almost chemically.

Agree that the sauce wasn't exactly perfect, but it did add. My family LOVED the dish overall. I replaced 1/2 teaspoon of smoked paprika with hot smoked paprika. The heat was nice and made you appreciate the sauce more.

I agree about the garlic. I was thinking about browning the garlic instead of adding it with the tomato. The sauce needed more depth for me.

Thanks Robin, your note was helpful

need to double the shrimp. Agree with Robin about the sauce and the paprika

This was a truly phenomenal dish -- a top five during Covid -- however, it took me far longer than five minutes to brown the pasta, so be patient.

This was a solid dinner. I wouldn't say it was among the best things I've made but was more than worth the effort and everyone loved it. It will also make your house smell amazing.

My family absolutely loved this dish and the aioli sauce was to die for - loved the lemon flavor! May try doubling the tomato next time and possibly grating the tomato as in traditional paella versus chopping it. Two thumbs up, 2nd time making this recipe!

Love it. I make it regularly now.

I really enjoyed this. I substituted half of the mayonnaise with Stonewall Kitchen Roasted Garlic Aioli. Delicious.

this was great, everyone loved it, look forward to making it more often