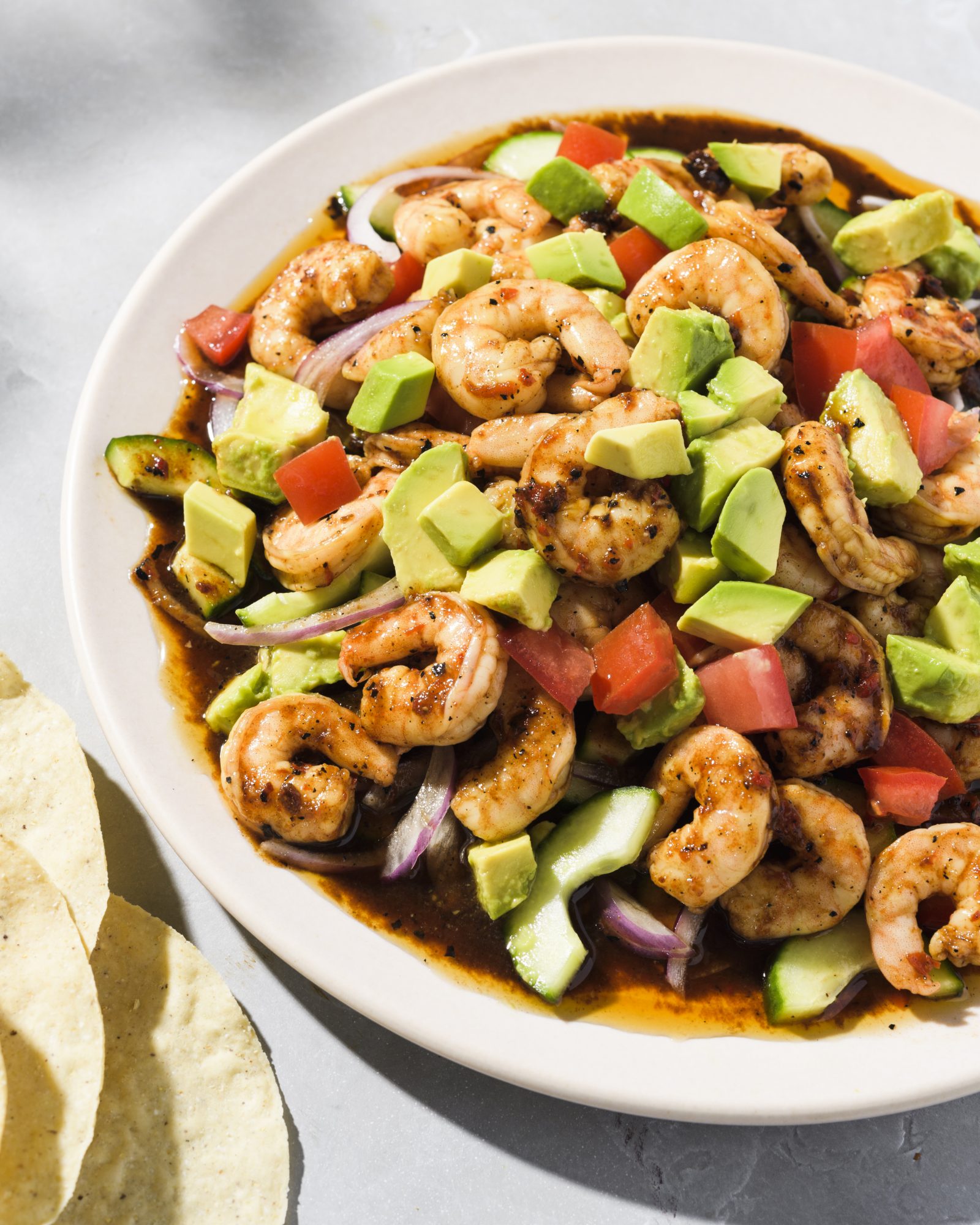 In the state of Sinaloa on the western coast of Mexico, aguachile, or “chili water,” is a popular ceviche-like combination of fresh seafood and a sauce of chilies, lime and water that gives the dish its name. Aguachile negro, specifically, derives its dark, inky color from soy sauce, Worcestershire sauce and Maggi, a liquid flavor enhancer available in most supermarkets—just look for the distinctive red and yellow label. These may sound like atypical seasonings for a Mexican dish, but they’re used quite commonly in the region’s cuisine. Spicy dried chilies like chiltepín or pequín usually bring fruity, earthy burn to the sauce, but can be harder to find in U.S. supermarkets. To mimic their complex heat, we pair fresh, moderately spicy Fresnos with a chipotle or morita chili, which are smoked dried jalapeños. (Don’t use canned chipotles, though, as their taste is entirely different.) Serve the brightly acidic, fiery aguachile with tortilla chips for scooping and dipping. Alternatively, use a slotted spoon to arrange some shrimp and vegetables over a crisp tostada for a satisfying meal. Though best enjoyed after the shrimp and sauce have been combined and allowed to stand for about 10 minutes, the aguachile can be refrigerated for up to two hours and served chilled; don’t incorporate the vegetables until ready to bring it to the table.

Don’t fully cook the shrimp when poaching them in water. Traditionally, this dish is made with raw shrimp, “cooked” by the acidity of lime juice. These shrimp will become tough and stringy if poached too long before being combined with citrus. The goal is to barely cook them, letting the lime juice finish the job.

Reviews
John C.
So refreshing!
We made this last night and served with homemade corn tortilla chips— definitely need a chip with some substance to it to hold the ceviche. We couldn’t find Maggi spice anywhere, so subbed 2 tablespoons dark soy sauce for it. We will definitely make this again, but I think we will use larger shrimp, as they cooked very quickly in the poaching liquid. We plan to get a larger variety, poach, then chop into smaller bite size pieces prior to marinating in the lime juice. Cocktail cucumbers halved and chopped were a perfect size for this.
Become A Subscriber To Rate and Review All Our Recipes.
Please Log in or join today for $1.