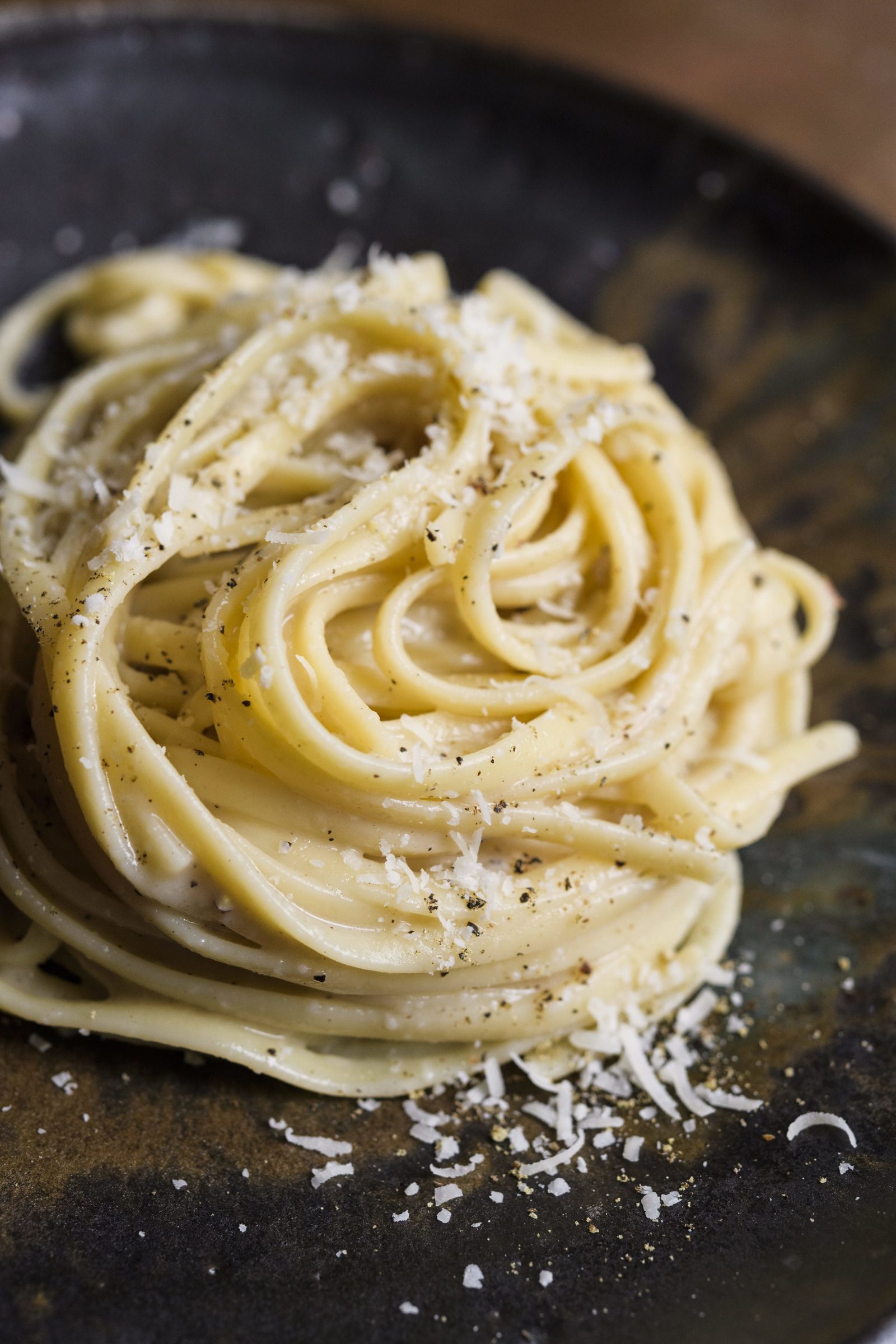 The name of this classic Roman pasta dish translates as “cheese and pepper,” the cheese being pecorino and the pepper being black pepper. After dozens of rounds of testing, we developed an unusual technique of cooking the pasta in a 12-inch skillet with a minimal amount of water into which a small amount of all-purpose flour has been whisked. The starchy cooking water becomes the base for making a cheesy sauce that won’t break and has a silky and creamy, but not at all heavy, consistency. For this recipe, we found it best to avoid high-end spaghetti, the type with a rough, floury appearance, as the pasta tends to release a large amount of starch during cooking, making the sauce gluey and too thick. Widely available brands such as De Cecco and Barilla work nicely. It’s important to use true pecorino Romano cheese purchased in a chunk and to grate it finely with a wand-style grater or grind it finely in a food processor. Preground cheese lacks flavor and has a tendency to clump. Cacio e pepe is at its best hot, so we recommend serving in warmed bowls to slow the rate at which the pasta cools as it’s eaten.

Don’t cover the skillet when cooking the pasta so that water is allowed to evaporate. If too much liquid remains in the skillet when the pasta is done, the dish will wind up thin and watery. Also, don’t leave the skilletful of pasta on the turned-off burner during the 1-minute cooling. Remove the pan from the burner altogether so the pasta will cool more quickly (the burner’s retained heat will slow the cooling), and be sure to toss the pasta a couple times so it releases some heat. That said, don’t allow to pasta to cool for more than a minute—the temperature should hover around 185°F—or the pecorino will not fully melt. While the cheese is tossed in, the skillet should remain off the burner.

Reviews
Bill O.
My supermarket sells kosher salt by the 3lb box
But I don&#x27;t use the whole thing in every recipe
Andrew T.
My Supermarket Sells Flour by the 5lbs Bag
2 teaspoons of flour? My supermarket sells flour by the 5lbs bag.
Zarinna M.
Delicious
Delicious
Juan G.
Needs a bit more water
Made this recipe last night and I found that 5 cups of water was not enough. Could be the type of pasta we used or the altitude from Colorado Springs, but I had to add another cup to have any starchy water to play with.
Mark H.
Great texture; could taste the flour
The resulting dish was nicely and evenly infused with the cheese. However, I couldn&#x27;t shake the slightly taste of uncooked flour.

This recipe was simple and the results were outstanding. I have tried other recipes for cacio e pepe but this is the best so far. One pan to clean afterwards is a bonus.

Well this did not work for me. I make my own pasta and think that homemade pasta has too much flour on it so my results were not good.

We are so sorry the recipe didn't work for you. Unfortunately, this recipe does require a pretty delicate balance of ingredients to be successful so substituting with homemade fresh or dried pasta would probably cause some issues. We hope you try it again with store-bought spaghetti since it is such a wonderful recipe!