On my first night in one of Bologna’s cheap osterias, I realized that ragù Bolognese is about meat, not dairy.

My journey to uncover the authentic ragù Bolognese started at Osteria dell’Orsa in a narrow alley in Bologna. The small eatery had been recommended by Matt Goulding, my guide and author of “Pasta, Pane, Vino,” as a cheap spot that does a respectable job with local classics.

Seated at a common wooden table in the front dining room off the kitchen, I ordered the tagliatelle with ragù Bolognese (the other mainstay is tortellini in brodo), greens that turned out to be a bowl of iceberg-like lettuce, and a quartino of potable house wine.

Through the serving window, I saw the 20-something chef standing in front of a huge ragù-streaked stockpot. He wore a sauce-spattered apron and eased a sizable slither of wet tagliatelle into a large skillet, ladling in sauce and wrist-flipping the ingredients until the pasta was modestly coated. All he lacked was a cigarette dangling precariously from the corner of his mouth as he shouted “Pronto!”

The first bite told the story. Ragù Bolognese is a silky, rich meat sauce, pure and simple. No herbs and no layers of competing flavors. I was to discover that, like everything in Bologna, this sauce, at its best, is redolent with local ingredients. In this case, meat. It was nothing like the dairy-infused American version I had taken to be gospel. To understand this sauce, however, I had to head to salumeria Bruno e Franco to better appreciate the key ingredients.

A short drive southwest to Savigno brought me to a small café and into the arms of three none who fried dough for breakfast.

Standing beside a large leg of prosciutto, the proprietor explained the process of curing the meat—it is salt-cured for at least a year—and the local preference for a sub-cut, the culatello, which is a boneless portion of the leg with bigger flavor and softer texture.

Looking around the small shop, I noted that everyone was impeccably suited with red caps, pristine white smocks and, in some cases, bow ties, all giving the shop an air of professionalism—a laboratory of sorts—promoting the notion that there is a science to producing the perfect slice of prosciutto, mortadella, speck, pancetta or guanciale.

What also was clear is that Bolognese cuisine is not about variety, it’s about local. There are few dishes that do not use what is produced in the region: salumi, truffles, Parmesan, porcini, the local sparkling wine pignoletto and balsamic vinegar from Modena, just an hour’s drive to the northwest.

But “local” is controversial. Today, Italy imports much of its food—beef from Brazil, pork from Poland, tomatoes from China and olive oil from Morocco. This is referred to as 10,000-kilometer cuisine, sourcing ingredients worldwide. But many Italian chefs and salumi producers are pushing back, trying to return to 2 kilometers. And this international trend is nothing new. In the 1930s, under Mussolini, the “grain wars” initiated the importation of foreign ingredients to feed the population.

To make a truly local ragù Bolognese, my next stop was Amerigo, a Michelin-­starred establishment in Savigno, a short drive out of town. Founded in 1934 by chef Alberto Bettini’s grandparents, the front room is a small retail store next to the dining room, where Roberta Galletti, an energetic and well-muscled pasta-maker, was rolling out huge sheets of dough on a large sunlit table using a yard-long rolling pin.

She transferred the sheets to a second table, where she cut squares with an ancient wheeled pasta cutter, topped them with dollops of Parmesan cream, then shaped them into tortellini with the help of the snowy-haired Giuliana Vespucci, the proprietor’s mother.

I headed to the small kitchen for my ragù lesson from chef Giacomo Orlandi, one of the cooks. The prep had been done. The soffritto (onion, celery and carrot) had been cooked, the pancetta diced and the beef and pork ground. Also ready was a small carafe of white wine and a modest bowl of canned tomatoes.

Bettini explained in detail exactly where the beef and pork had been raised. All nearby—a clear indicator that the soul of ragù Bolognese is its local provenance. The fat content of the meat lends a lubricity and depth to the sauce without milk or cream. In fact, when I asked Orlandi about the lack of dairy, he looked puzzled. Cream in ragù Bolognese? No!

Just down the street at the Michelin-starred Amerigo, I finally got a lesson in true ragù Bolognese from chef Alberto Bettini–three different meats cooked for hours with no cream or other dairy.

In time, I learned that Italians will sometimes add dairy, but only on the second or third day after the ragù is made. This is when the flavor begins to flatten, so cooks add other ingredients to touch it up. Lambrusco, for example. Parmigiano-­Reggiano. Or, yes, milk or cream. Mystery solved.

As I watched Orlandi work, I dispensed with another American myth about dairy in Bolognese. I had been told that milk or cream helps soften the meat. However, Orlandi sautéed the beef and pork for less than 30 seconds each. Not enough time to crisp up any bits and pieces. The meat starts out soft and stays that way throughout the 5-hour cooking time. (He admitted that he would cut the cooking time for smaller quantities; these were restaurant portions.)

Back at Milk Street, we had our work cut out for us since we did not have access to the same high-fat meat that Orlandi did. But we did follow the basic rules: no garlic, no milk or cream, and a long simmer, in our case with smaller amounts, two hours.

Tomato paste and beef broth helped increase the meatiness of our store-bought beef and pork and, using an old kitchen trick, a bit of gelatin boosted the creamy consistency that is ragù Bolognese’s signature. We tried a variety of pork cuts: prosciutto instead of pancetta (we went with the latter, the authentic choice) and pork ribs instead of pork shoulder. We preferred the shoulder; we did like boneless beef short ribs, however, and ground our own meat in a food processor since preground supermarket beef and pork produced a miserable ragù. 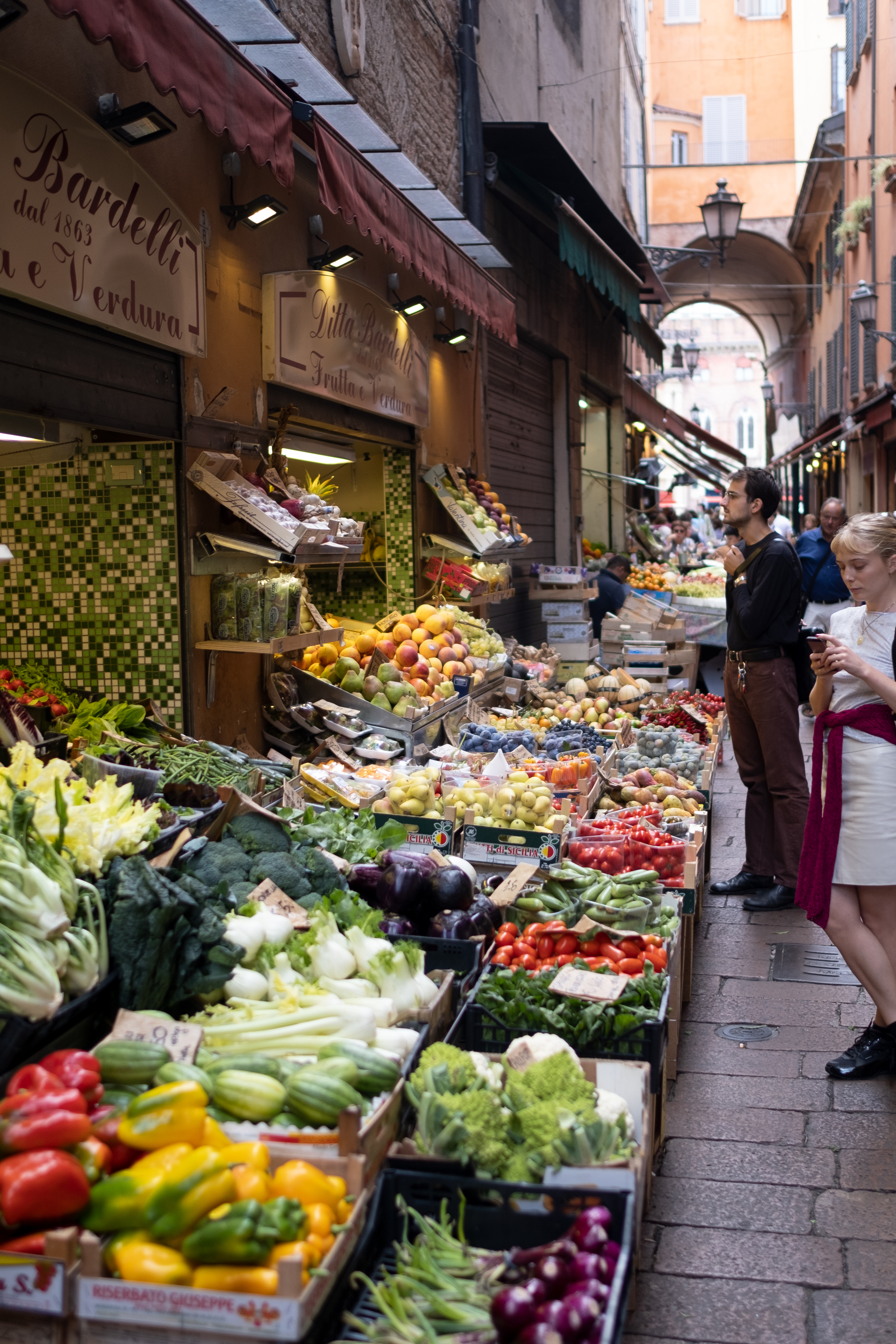 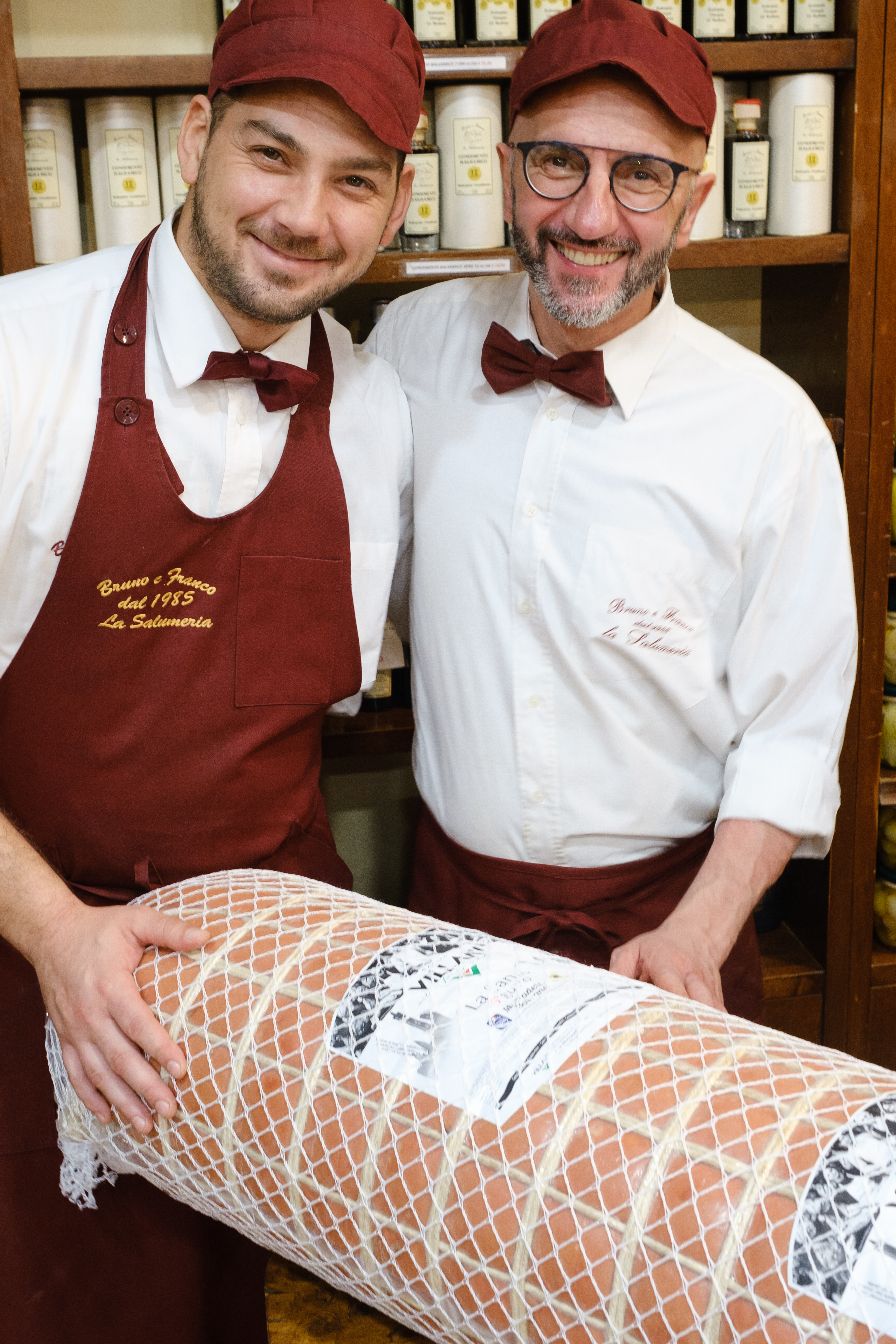 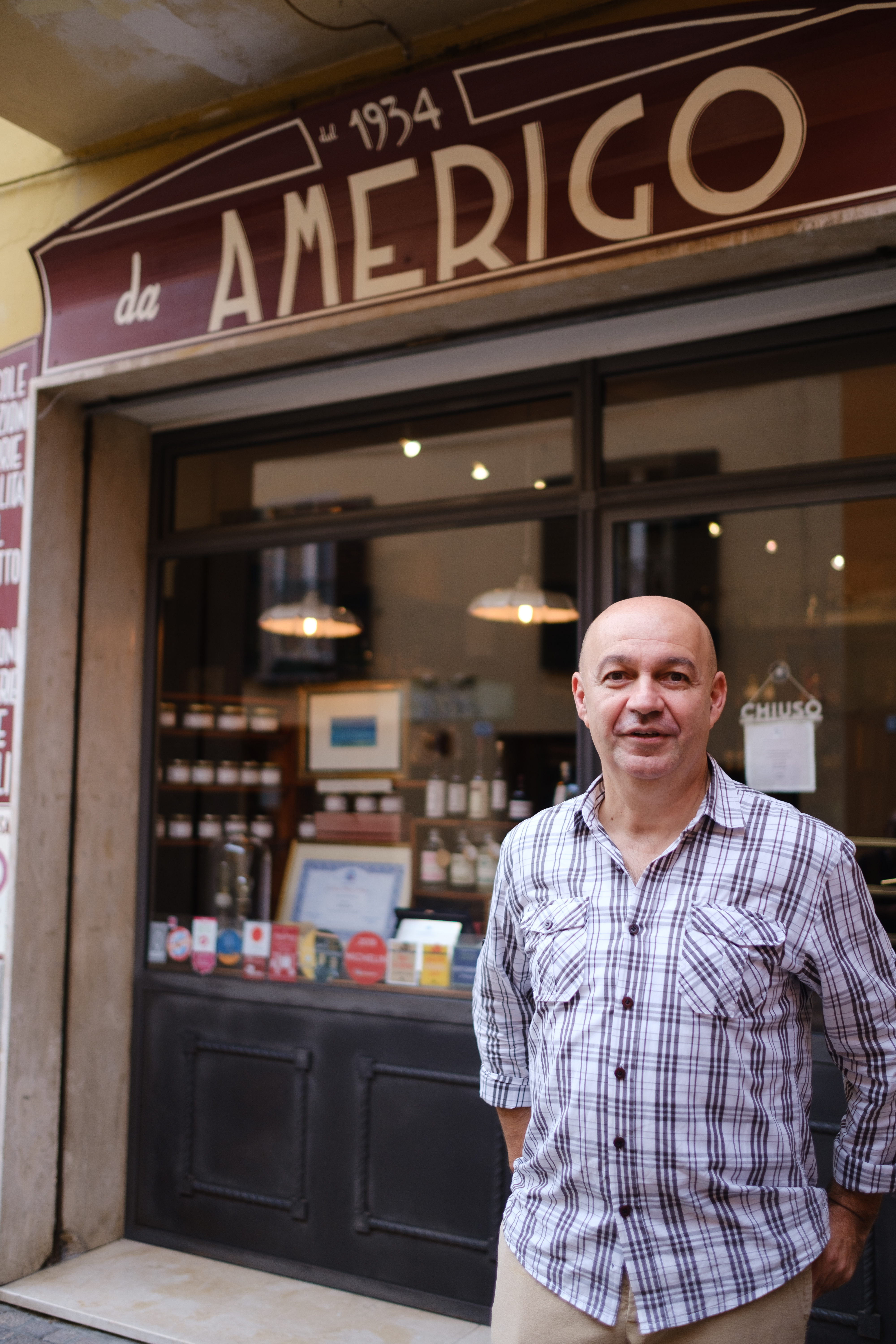 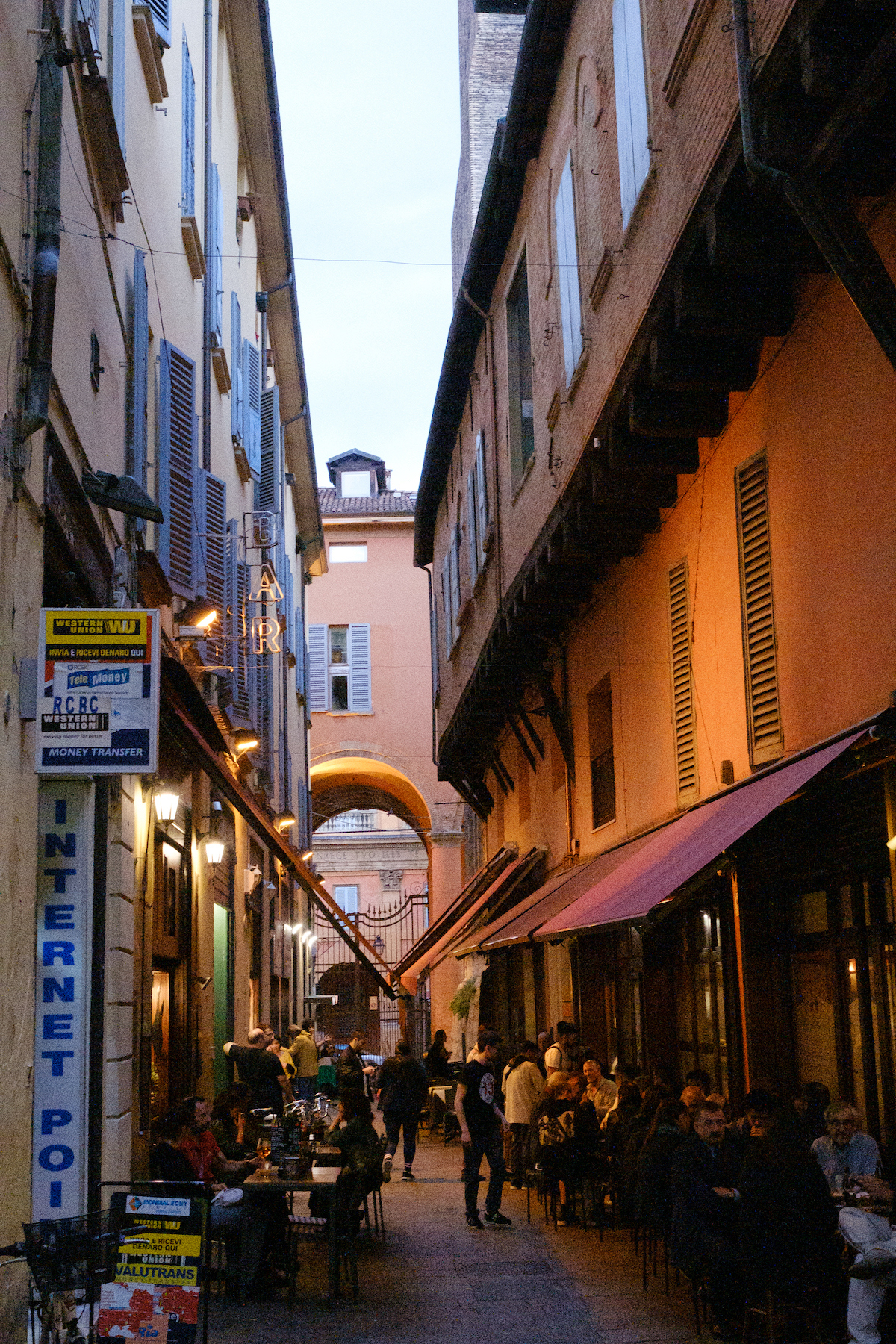 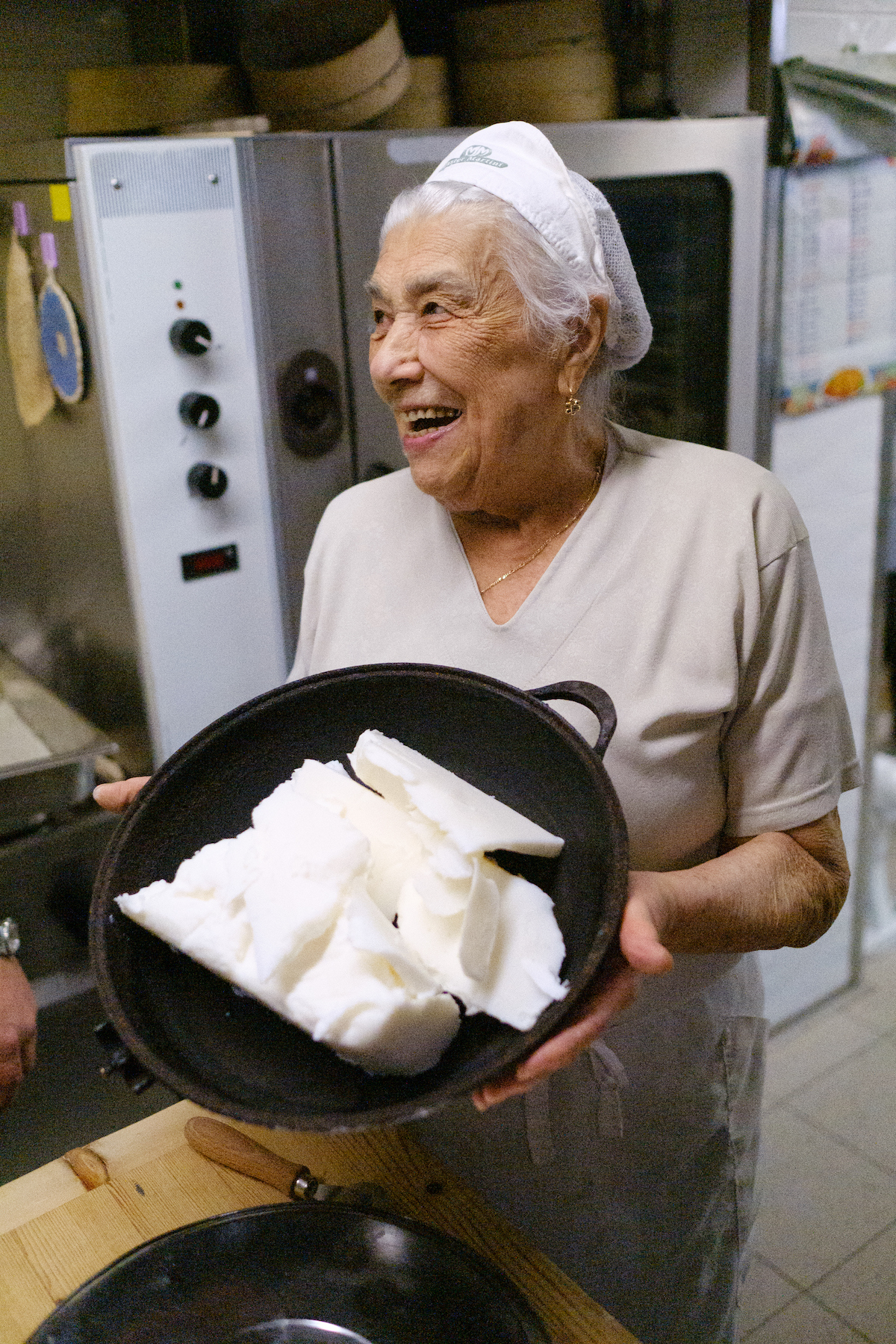 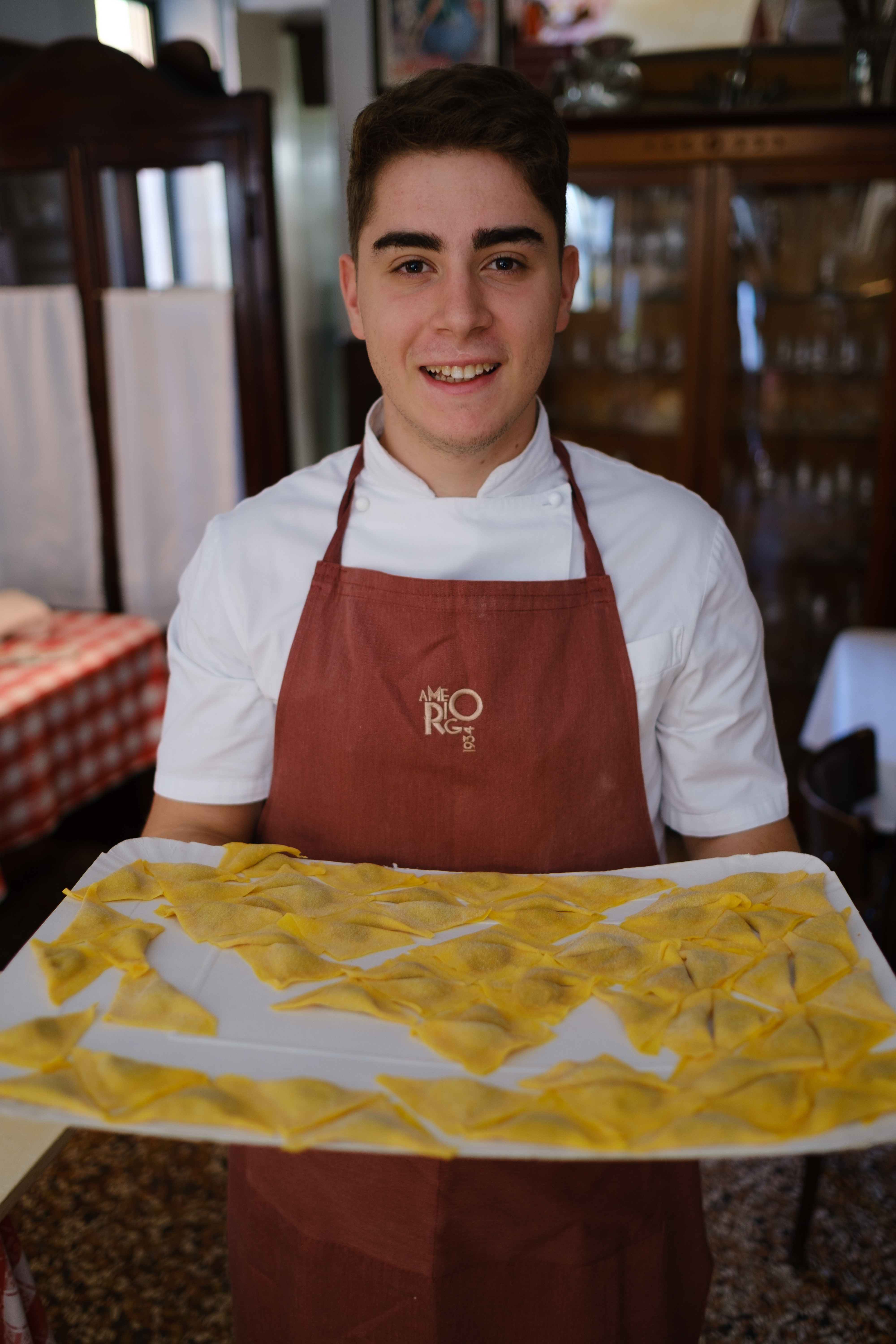 Now that we had mastered the sauce, lasagna Bolognese was the logical next step. On my last night in Bologna, I ordered the lasagna Bolognese at Osteria Broccaindosso, which turned out to be my favorite restaurant meal of the visit. We started with an enormous platter of sautéed porcini, another of assorted salumi, and an excellent bottle of barbera.

And then I tucked into the lasagna, which was a revelation. It was a saucy, tender marriage of ragù Bolognese, spinach noodles and creamy besciamella (the Italian version of French béchamel sauce) without the typical overbaked top layer or stomach-bomb of fistfuls of grated mozzarella. In fact, cheese was mostly absent here except, perhaps, as a modest sprinkling of Parmigiano-Reggiano between the layers.

For our version, we added just a bit of Parmigiano-Reggiano to the besciamella, and we used half-and-half instead of milk because it was more stable and less likely to break. No mozzarella. No chewy cheese topping.

Though many recipes are hard to translate to the American kitchen, both the ragù and the lasagna are very close to the original, even with American ingredients. Go to Bologna for the architecture, the colonnades and the nonne (grandmothers). But if you want an excellent ragù Bolognese, you can prepare it at home, no passport required.

At Amerigo, Roberta Galletti rolls out pasta dough by hand to use in tortellini, tagliatelle and lasagna.