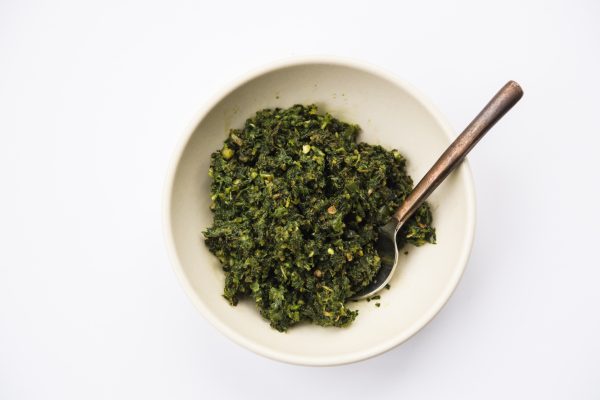 We mixed our green adjika—a spicy Georgian sauce—into numerous vegetable dishes and found it improved everything, adding bright, herbal flavor in one stroke. Here’s a handful of our favorite uses:

■ Marinate sliced tomatoes in adjika for a better BLT or simple tomato salad.

■ Toss it with nectarine slices and lemon juice, then arrange the dressed fruit on buttered toast that’s been smeared with goat cheese.

■ Combine it with grapeseed oil, red wine vinegar and pomegranate molasses, then toss with a mix of kidney and Great Northern beans, chopped radishes and finely chopped red onion for a bright bean salad.

■ Mix it into warm pasta with olive oil and sautéed vegetables for a quick sauce.

The croquettes at Barbarestan—an upscale restaurant in Tbilisi, the ancient capital of Georgia founded spiced pumpkin puree. Yet as I eat under the brick arches of the former butcher shop, they are an afterthought. The unlikely element that draws me here is the dollop of green paste accompanying them.

The aroma alone is intense, a robust blend of mint, garlic, chilies and coriander. On its own, the sauce overwhelms. But paired with the croquettes, it becomes a cooling herbal mash with a kick of heat that cuts through the sweet, smooth pumpkin puree. Simply delicious.

The recipe was adapted from a 19th-century cookbook written by Barbare Jorjadze, a duchess now considered Georgia's first feminist, and was among several on Barbarestan's menu showcasing Jorjadze’s aristocratic takes on peasant dishes.

Manager Andria Qurasbediani explains that the sauce is a version of adjika, a broad family of pepper-­based pastes eaten throughout the Caucasus Mountains. Similar to ajvar in Eastern Europe or biber salçası in Turkey, adjika was traditionally made once a year at harvest, then preserved as a simple yet bold pantry item that adds a quick punch of flavor and color to vegetables and meat throughout the year.

For our version, we used 4 cups of fresh mint and four chopped serrano chilies for just the right heat. A teaspoon of ground coriander added complexity. We used the adjika to dress blanched vegetables and loved the results, but we also found several more ways to use it (see sidebar) in everyday cooking.