The hilly streets of Bixiga can be punishing, forcing you up and down a visceral cadence, swooping high and low with panting inclines and calf-wrenching declines. But as reward for your exhaustive clambering, you are transported. To another continent. Maybe another time. All of it deliciously.

Because climbing the cobbled streets of São Paulo’s “Little Italy” neighborhood is a sensory immersion, a visit to a Neapolitan nonna’s kitchen, the aromas of pungent garlic, sweet tomatoes and yeasty focaccia swirling around you.

At first, it smacks of culinary cognitive dissonance in this sprawling Brazilian metropolis, the largest city in the Southern Hemisphere. Except, this “Little” Italy is anything but. By some counts, roughly 15 million Italian immigrants and their descendants live in the state of São Paulo. For perspective, that’s roughly triple the number of Italians living in Rome, Naples and Milan combined.

And it’s on full display at shops like Padaria Italianinha, a wedge of an Italian food market, its shelves packed with jars of marinated artichoke hearts, piles of pasta, heaps of freshly baked bread, bins of olives, flasks of limoncello and olive oil, and—in a nod to Brazil’s Portuguese heritage—rafters hung heavy with linguiça sausage. And it’s been that way since 1896.

Sandra Franciulli runs the shop today. Her grandfather moved here from Naples, eventually buying the shop—tin ceiling painted white, storefront open to the street with foods spilling to the sidewalk—45 years ago. Their top seller? A family creation—rosca de calabresa, a thick roll of dough kneaded from local flours and woven with Brazilian pork and fennel.

It’s a savory-spicy—and ridiculously tender, rich and fatty—example of cultures meshing, Italian methods marrying Brazilian ingredients. And that was just the start. Because, as I soon would learn, São Paulo is a city long built on, with and around pizza.

Italians have been immigrating to Brazil since as far back as the 16th century. By the late 1800s, they were coming in droves, driven equally by a challenging economy at home and a strong demand for labor in post-slavery Brazil. This continued in waves for decades, particularly in the years following the end of World War II.

The result: Brazil is home to the largest population of Italians outside Italy. So much so, some towns are nearly entirely descended from Italian immigrants. It shows in the architecture, the fashion, the wine, even the language, which has seen the local Portuguese gleefully adopt Italian-isms such as ciao and nonna.

And then there is the food. The demarcation between classic Italian and traditional Brazilian often is murky. More importantly, to the average Brazilian, it’s inconsequential. Though local chefs such as Mara Salles are working hard to preserve indigenous cooking, many consider pasta, risotto and polenta as Brazilian as feijoada, moqueca and farofa.

Brazilian pizza merits special consideration. Because nowhere—sorry, but not even in New York City, not in Chicago, not in Naples, from whence so many Brazilians came—is pizza more revered, more celebrated, more innovated, more consumed than Brazil. And in particular, São Paulo, a city where even children’s hopscotch games end with a square topped by pizza.

Pizza in São Paulo is an affair of a different order. It is a fine dining, Sunday family dinner situation. It is sit down, not carry out. It is white tablecloth, not paper napkin. It is fork and knife, not greasy fingers. It is wedding food, not game night grub. It is anything but your basic pepperoni and mozzarella slice.

Erik Momo was my gateway to a week of eating my way across São Paulo’s pizza scene to suss out what sets it apart. The flagship of his family’s 1900 Pizzeria chain lives in a long brick building with soaring ceilings, a former railroad warehouse his immigrant great-­grandfather called home and his musician father wanted to convert into a music studio.

“A friend told him he never would make money, so he decided to make pizza,” Momo says. “Not every guy who came from Italy was a real cook, but they ate pizza and they tried to replicate it with what was available.”

By some counts, the city today is home to 6,000 pizzarias (as it is spelled in Brazil), so it seems at least some of them worked it out.

“Everything was so different. The flour, the tomatoes, the mozzarella. They had to make their own style. So we made our own pizza culture. It gained its own life.”

That creative, sometimes over-the-top style is evident as the pizzas Momo tosses emerge from the oven, its chimney soaring three stories above. The timing is different. The toppings are different. And, indeed, the tastes are different. I learn quickly that Brazilians are unabashedly creative with their pizza toppings. Any dish from any cuisine is ripe for transformation.

We start with the relatively tame Calabresa, a Brazilian classic. A thin crust piled thick with onions, olives and sliced sausage, it’s a feat to lift a slice to my mouth without the toppings sloughing onto my plate. That, of course, is an important lesson. In Brazil, pizza is built high. Very high. So high, it is eaten with fork and knife, never picked up by the crust.

In addition to silverware, all those toppings also require a different approach to crust. Classic Neapolitan dough typically ranges between 55 percent and 62.5 percent hydration. In Brazil, it often clocks in at no more than 50 percent; the lower moisture—and a long ferment, typically 48 hours—helps create a sturdier crust to stand up to the heft of the toppings.

From there, the topping onslaught continues. Momo’s Carpaccio pizza is the essence of a New York deli sandwich. Tomatoes, thinly sliced beef, capers, mustard and Brazilian Parmesan cheese. His Salmone pizza is your dream bagel, complete with smoked salmon and Catupiry, the local and fervently loved cream cheese, finished with dill, lime juice and olive oil.

The crust and toppings aren’t everything, of course. Tomatoes and timing matter—and differ—too. This I learn at Pizzaria Speranza, where third-­generation owner Francesco Tarallo serves pies in the same red brick building his family lived in after immigrating in the 1950s.

“My grandfather was a construction worker and came to work in the city. But when he got to São Paulo, he found nobody had Neapolitan pizza. So he built an oven and brought the rest of the family over. They decided to stay and make pizza.”

When his grandfather tried to replicate the pizzas of his youth, the sauce proved perplexing. Where Italian tomatoes lean sweet, Brazilian go sour. The more acidic tomatoes called for a different approach than the sauces of Italy. And today, most Brazilian pizza sauce is made simply from finely ground fresh tomatoes, dried oregano and salt. Nothing more.

It sounds dull, but actually it’s brilliant. The tomatoes retain a bracing freshness and a pleasant texture. Tarallo’s pizza makers—both have worked for the family going on 40 years—ladle it liberally onto rounds of dough to make basic margheritas, then slide them into a wood-fired domed oven. That’s when I notice the unhurried pace of it all.

In Naples, pizzas are cooked at a blistering speed and temperature—60 to 90 seconds at 430°C to 480°C. But that doesn’t work with Brazilian pizzas and their thick layers of toppings. Pizza here is cooked at a relatively tepid 330°C for roughly 2½ minutes, extra time that allows the crust to crisp more slowly while the heat works its way through the toppings. 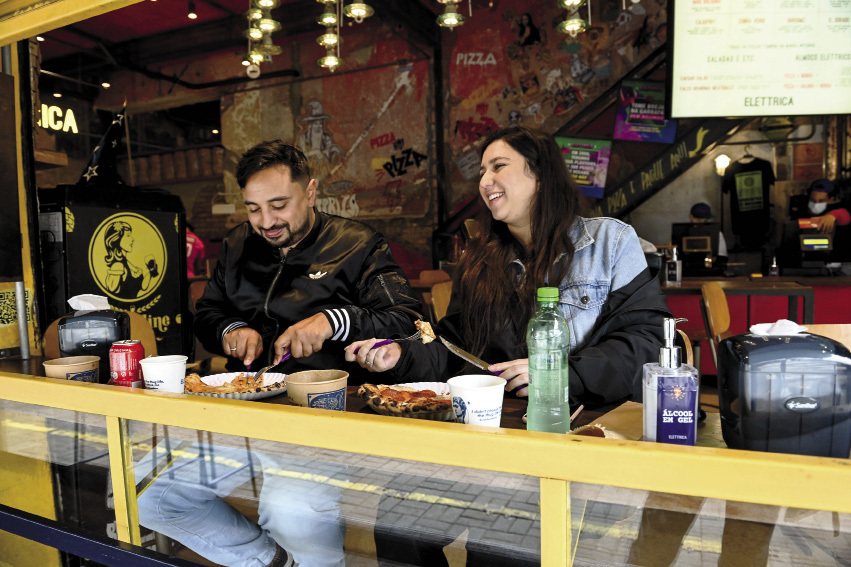 Finally understanding what’s happening under the hood, I decide it’s time to explore the deliciously gaudy side of Brazilian pizza. When it comes to toppings, anything goes, and I wanted to taste all the extremes.

At Veridiana Pizzaria, Roberto Loscalzo continues his parents’ tradition of robust flavors. His Caponata pizza is reminiscent of the Sicilian dish for which it is named, starting with layers of ricotta cheese and fresh tomato sauce, then diced eggplant roasted with olive oil, raisins, green olives and dried basil. The result is briny, smoky, sweet and tangy.

By contrast, his “Napoli in Beirut” pizza was relatively tame, yet one of my favorites. A classic Brazilian crust topped with goat cheese, then sprinkled with sumac-rich za’atar and diced tomato. It was a boldly herbal and tangy nod as much to São Paulo’s Italian heritage as to its equally vibrant Lebanese community.

From there, I headed to Bráz Pizzaria. The small chain was started by five friends unafraid of experimenting. It showed in their Carbonara pizza, the delicious love child of Rome’s most sumptuous pasta dish and Brazil’s perfect pizza, complete with egg yolk drizzled over the cheese- and pancetta-topped crust while still piping hot from the oven.

Bráz also has a sibling set of restaurants, Bráz Elettrica, an effort by the company to challenge the very Brazilian notion that pizza is formal and eaten only at dinner. They’ve had mixed success convincing Paulistanos that lunchtime is pizza time, but not for a lack of creatively delicious pizzas. To wit, their this-changes-­everything Pad Thai Pizza.

Stay with me on this one. Crisp crust. Tangy fresh tomato sauce, this time umami-spiked with a bare hint of fish sauce. Then chunks of cooked chicken, slices of red onion, generous red pepper flakes. As soon as it comes out of the oven, the whole thing is splashed with a lime- and sesame-rich peanut sauce, then cilantro, bean sprouts and paper-thin slices of fresh red chili.

Pad Thai as a pizza made me a convert.