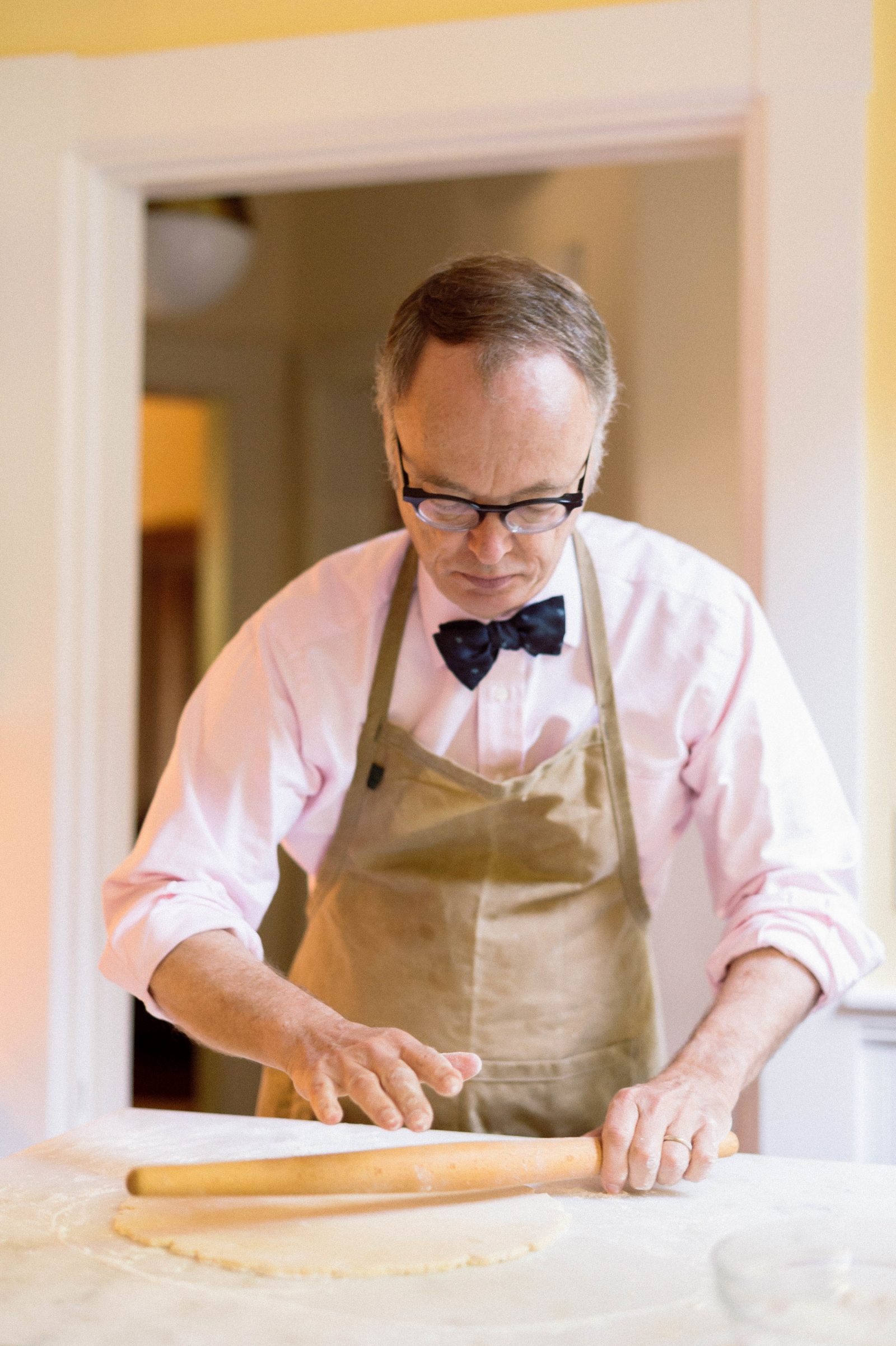 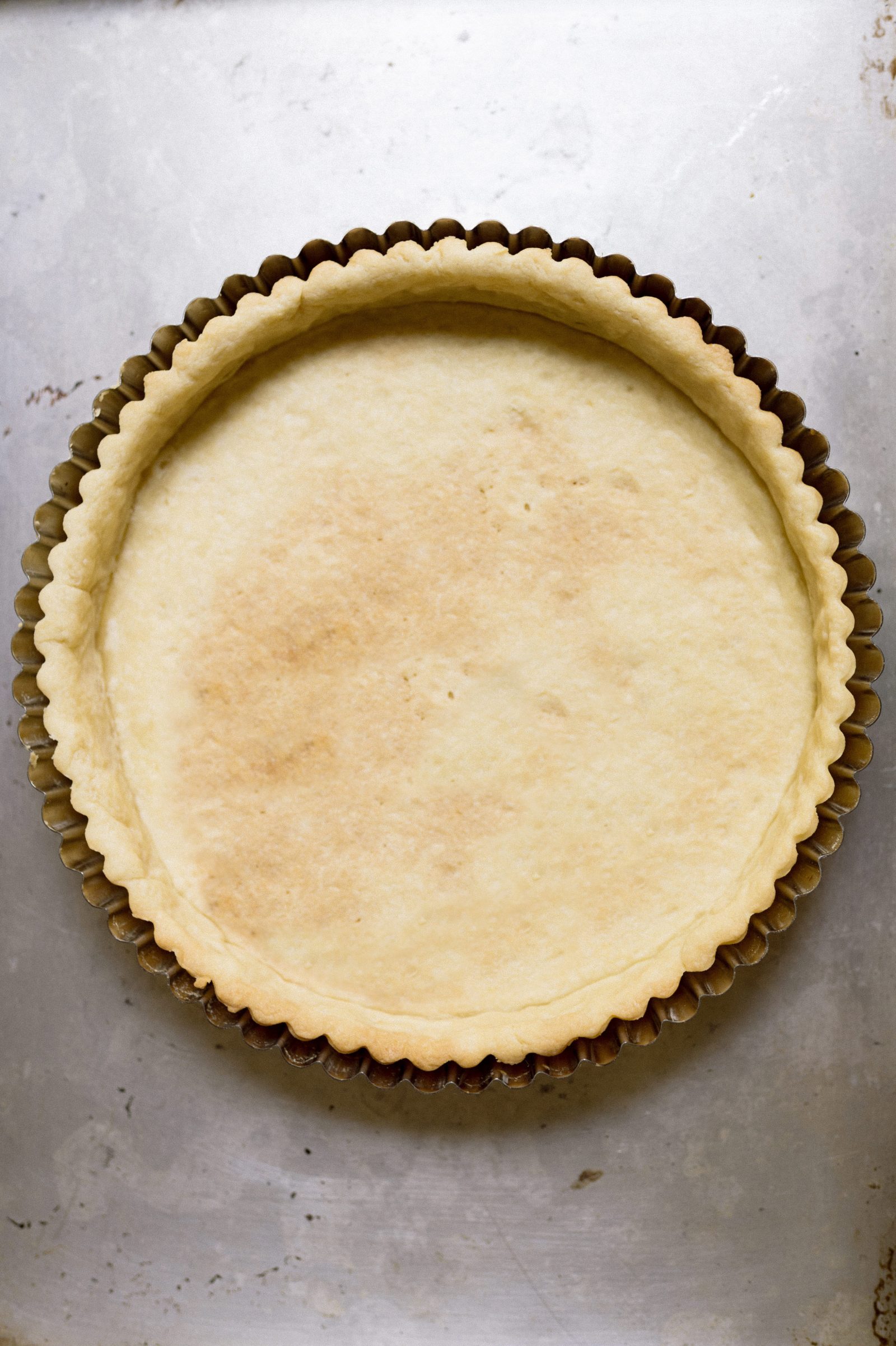 The prebaked crust was an unsolved mystery. Either the dough was dry and hard to roll out (but less apt to shrinking in the oven), or it rolled out fine, only to slump during prebaking. No amount of fiddling with the usual suspects — the type and amount of fat, flour and liquid — or the addition of strange ingredients such as vinegar, vodka and baking powder were going to get us to the finish line. We needed a fresh start. Inspired by a Japanese technique called tangzhong (in which a flour-and-boiling-water paste hydrates the dough while retarding gluten formation), we found that using a cornstarch gel made for a tender dough that came together effortlessly in a food processor. Another surprise kitchen staple — sour cream — turned out to weaken the gluten even more, resulting in even less slumping. The result was a bombproof pie dough that is simple to mix, rolls out easily, stands up to handling, bakes up light and flaky, and doesn’t slump or shrink when prebaked. This is the master piecrust we’ve all been searching for.

Don’t skip the sour cream; it’s key for a tender crust. And don’t skimp on the pie weights; use enough to come ¾ of the way up the sides.

Reviews
Marco C.
Best pie dough ever!!
I made 2 pies for Thanksgiving. Double-crust apple and pumpkin praline, which required prebaking. Both turned out amazing! Make sure to use 2.5 cups of flour for the double crust, as recommended.
Lori M.
Deliciously flaky crust!
This was simple to make, just required some patience and a bit more flour than you would think. I struggled a bit with keeping the edges somewhat nice when rolling out, but a bit of patching was unnoticed after baking. Flavor and texture are excellent. I baked it filled (not blind baked first) with no issues.
Anna S.
Perfect every time
I love this pie crust recipe. Flaky, browns beautifully. In permanent rotation now.
Caroline D.
Incredible
No kidding on this dough being able to handle abuse. I’m 24 and new to baking but really enjoying it. I re-rolled this dough because I didn’t like my original shape (and wanted to put it to the test a bit!) and it worked great, still flaky. Going to try the double crust at some point…I believe CK recommend doubling everything and doing 1 1/2 cups flour … thank you Milk Street and Chris Kimball!

Will yogurt work instead of sour cream?

You may find this article helpful: https://www.177milkstreet.com/2019/04/how-to-substitute-greek-yogurt-for-sour-cream

I just did it with Chobani non fat Greek yogurt. It turned out great.

While you may get similar results we can't promise the pie crust will have the same taste, texture and etc. with this substitution.

Can this be doubled and used as a top crust as well?

Can you freeze the dough for future use? Also can you use this dough for a double crust pie? I know it says prebaked crust, but it’s a dream to work with. Thank you for the recipe!

I used it for hand pies and did not prebake (obviously!) and they turned out perfectly!

Can this recipe be double and separated prior to rolling for two crusts?

How do you keep the crust from shrinking? Especially in a tart pan? And should you grease the pan?

I've made it twice and it is very sticky.

I made this exactly as described but the sides slid down. If filling 3/4 full with pie weights is key, I would suggest adding it more prominently in the instructions.

I made this pie dough 20+ times now. First, I tried to measure everything per the recipe. Then I tried using cups for measure and only 8tbl of butter.. still came out great. I have used yogurt instead of sour cream. You just cant screw this recipe up and every time it comes out amazing. I made sweet pot pies with it and chicken pot pie. I have doubled the recipe if I am making a sweet pie so I can cover the top. The slid down problem could be fixed with simply brushing the outside edges of the pie bowl with the egg wash. If you are making a pie with the top, there wont be a slid problem as it will stick to the rim and the top crust.

I joined Milk St because of this recipe. No more aggravation over pie crust. I but 8 oz of sour cream and make 6 pie crusts and freeze them. Working with this dough is like working with play dough. A million times thank you!

if you do not own a microwave how do you handle the crstarch and waater?

You can simmer the cornstarch and water in a small saucepan over low heat until it sets then transfer to a small bowl and freeze until chilled.

I have various pie dough recipes I use, but this will go to the top of the list. Easy, delicious flavor, and bakes up so flaky and delicate. I made hand pies and no breakage or seepage, yet flaky and light. I did add a touch more sugar. It is fabulous!

My first attempt was a total disaster. I wanted 2 crusts so I doubled all the quantities. I took butter straight from the refrigerator, cut into 1/2” or smaller chunks. They just rolled around in the food processor, hardly mixing with the dry ingredients at all! After a minute in the processor, I dumped it all into a bowl and tried using a pastry cutter to mix the butter into the wet dough. What a mess. I went back and re-checked all my measurements and looked at other pie crust recipes to verify that the proportions were similar.
Any thoughts? Is this an issue with doubling quantities. Anyone else fail so abysmally?

Since this was designed as a single-crust pie dough, we didn't test doubling the amount in the food processor. Our guess is that, when doubled, the volume of ingredients in the food processor didn't allow them to move around enough to process the butter. Our recommendation would be to make each dough one at a time to ensure the ingredients are able to be mixed properly.

I made 3 separate batches of this recipe. The first was my fault--I didn't freeze the crust before baking and the pretty edging melted together and lost its distinct shape--but it didn't slump. However, the other two were blind-baked using baking weights and they slumped. Also, the crust was a bit heavy for my taste. But I'll probably use this recipe again anyway. It was so easy and I didn't get any complaints. I'll try even harder to not stretch it, and maybe there won't be a slumping issue. I'll just know not to expect a particularly pretty crust.