If it isn’t made with basil, pine nuts, cheese, garlic, salt and olive oil—and nothing more—it isn’t pesto. If it isn’t pounded chunky-smooth, loudly and rhythmically with a mortar and pestle—and preferably a spacious marble one—it isn’t pesto. And if the pine nuts aren’t raw and if the cheese isn’t a blend of Parmesan and harder-to-find pecorino Sardo ... well, you get the idea.

On all these things, Roberto Panizza, Italy’s leader of a burgeoning movement to preserve and celebrate traditional pesto-making, is adamant and clear. And that left me convinced we had a dim chance of replicating his recipe back home at Milk Street.

I’d come to Genoa—birthplace of the classic mash of basil, pine nuts, garlic and cheese—to learn what differentiated the pesto of the Old World from the too-often potently garlicky, blandly oily and wanly herbal sauces we make—or buy—back home.

With a “Mi amore!” and a puckered air kiss, shopkeeper Manuela Bettinelli handed me a thick slab of focaccia slathered thicker with a deep green and wildly aromatic schmear from the pot of pesto Genovese.

One bite was all it took. Even cold, it was astounding. Herbal and peppery, but not pungent. The taste of sun and grass in marriage. It was rich, fresh and robust in flavor and texture, flecked with basil leaf and granules of Parmesan.

To discern the alchemy of great pesto, I needed to head across the street and into Piazza Colombo, a congested square that’s home to Il Genovese, a 100-year-old trattoria run by Panizza. True to Italian cliché, he learned to make pesto from his mother.

He pulled from the trunk of his car a 300-year-old, 45-kilogram white marble bucket-­like mortar and an almost baseball bat-size wooden pestle once used in a monastery. It is a modern version of the earliest cooking tool, a rock with which to bash food. That action, of course, gives the sauce its name—pestare: to crush, grind or tread on.

As Panizza worked, it was evident that pesto Genovese is a sauce of a different order. And the difference traces to its roots. Pesto began simply: a paste of salt and garlic. A lot of garlic. Genoa’s sailors used it to make their spoiled foods palatable. Over time, basil and olive oil were added, later pine nuts and cheese. The garlic receded to a background flavor. But if the biting, garlicky sauces we eat in the U.S. are any indication, it seems we never got the memo.

Panizza dropped two small garlic cloves into the mortar, then pounded them to a smooth paste. Then he added pine nuts. Again, he bashed. Over and again, until the mixture resembled a soft but dry peanut butter. Only then did he add the basil, giant bunches of young, tender leaves, so much it seemed he was preparing salad for 12, not sauce for four. As he mashed and ground, there was an explosion of peppery-herbal aroma. He ground and ground, breaking down the leaves, mixing them. And as they mixed, blending with the garlic-pine nut paste, the color of the sauce muted from bright to creamy green.

A bit of coarse salt. A bit of ground Parmesan. A bit of extra-virgin olive oil. All far less than I would have thought. In fact, everything but the basil was used in seemingly minuscule volumes. Which suddenly made sense. This is a basil sauce. The point is to highlight, not mask, the herb. Panizza’s final flourish: shavings of pecorino Sardo, a smoked pecorino closer in taste and texture to aged Gouda than to its better-­known cousin, pecorino Romano.

As Panizza finished, the pesto clung thick to the pestle. If it is possible to smell the color green, this was it. The taste was richly herbal without overpowering; the garlic a high note, not a domineering force. Again, a revelation. Relegated to the background, garlic plays the role of an acid, gently nudging all the other flavors forward without demanding the spotlight itself. As for the texture? Coarse, grainy and too thick.

And then it occurred to me. Of course it was too thick. It wasn’t finished. A true pesto Genovese isn’t complete until it is wedded to pasta—and thinned by the water that cooked it. We thin our pesto with too much oil, and the result is a fatty, unctuous, drippy mess with dull flavor.

But Panizza used just enough oil—and added it only toward the end—to unify his pesto and draw together its flavors, keeping it thick and rich. When we were ready to eat, he tossed heaps of pesto with freshly boiled gnocchi and several ladles of their starchy cooking water. The water and heat worked quickly, melting the pesto into a creamy sauce that coated the pillow-­tender knobs of pasta.

As we ate, Panizza offered additional lessons. Never toss the pasta and pesto over heat; this is a raw sauce and direct heat muddies its flavor. Always use the youngest, most tender basil; it has the freshest, brightest flavor and breaks down easily under the rough treatment of the pestle. And never, ever use a food processor—a tool increasingly popular, even in Genoa—because it purees rather than bashes. The flavor and the texture will be wrong, closer to a creamy mayonnaise. 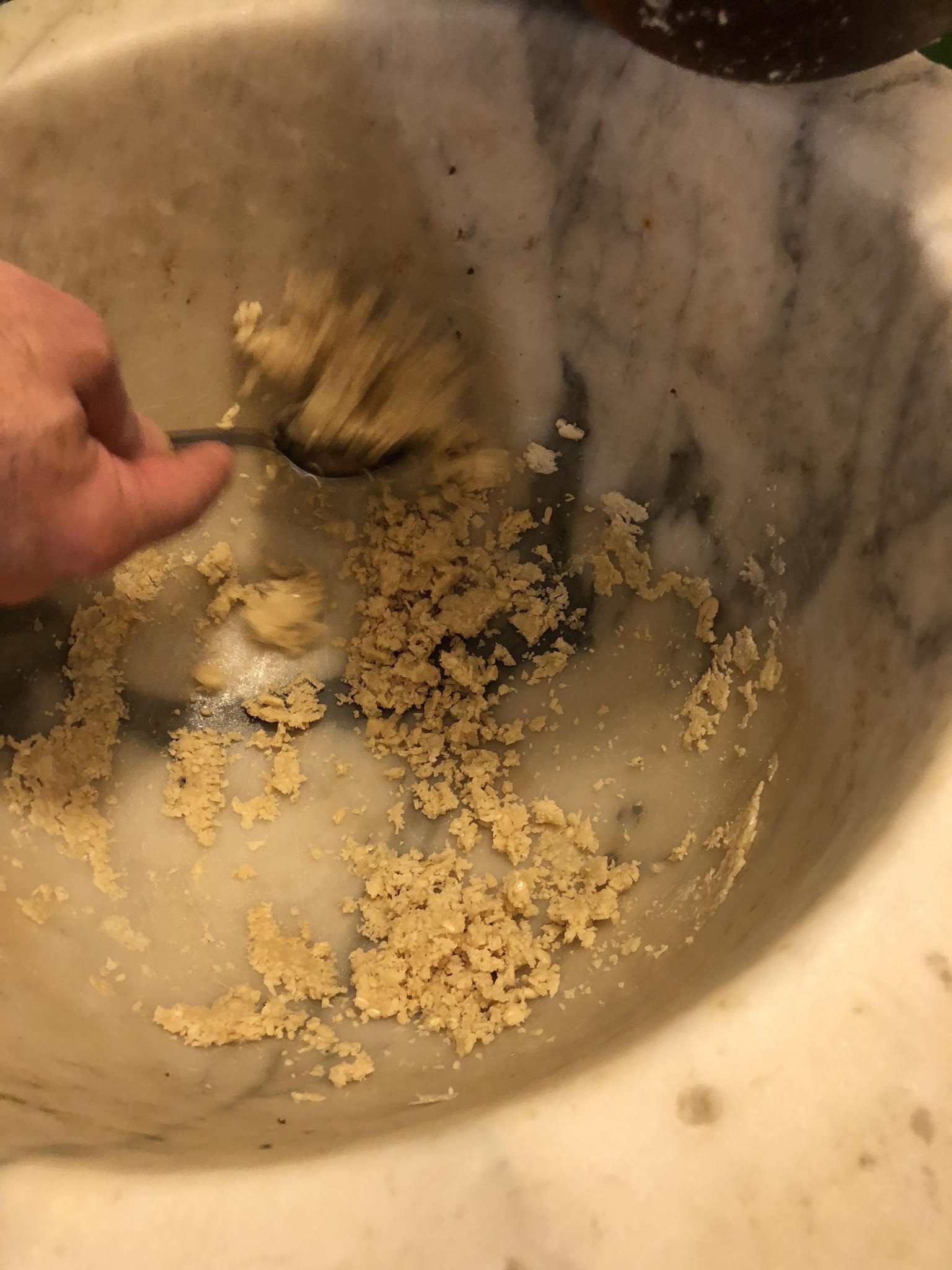 Order matters. First, raw pine nuts and garlic are crushed to a paste. 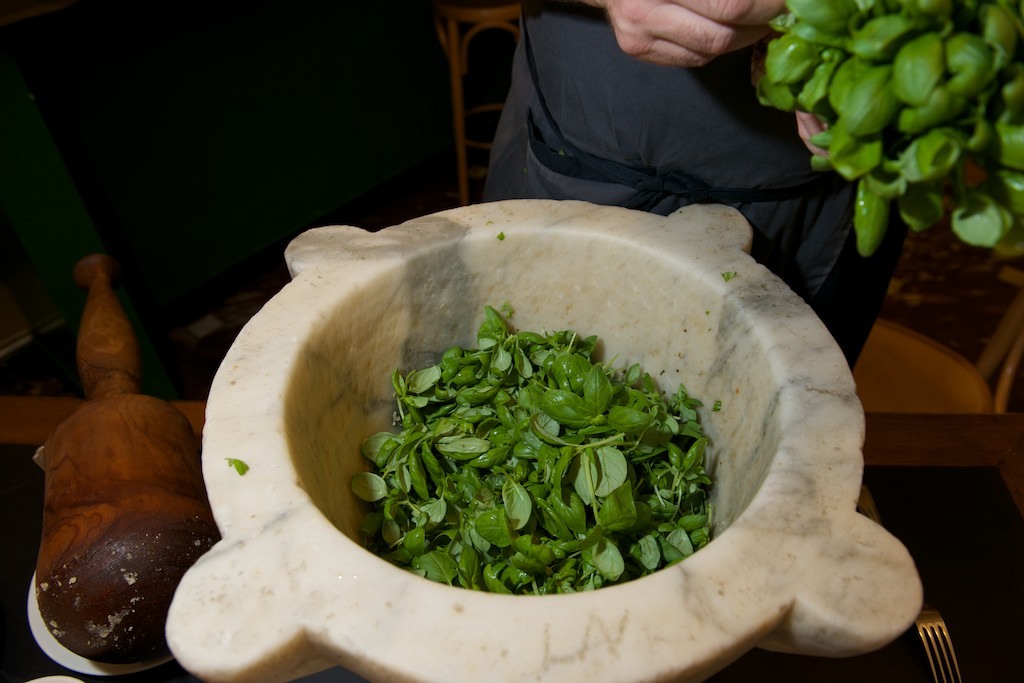 Fistfuls of fresh, young basil are then mashed into the mixture. 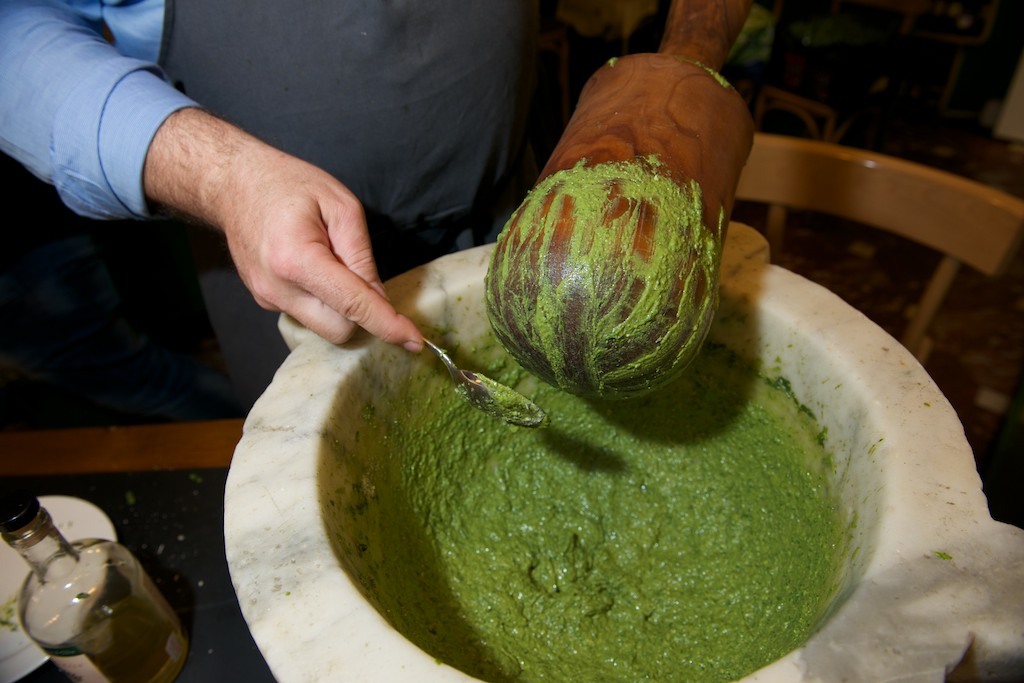 The pesto will have distinct flecks of leaves and will be richly aromatic. 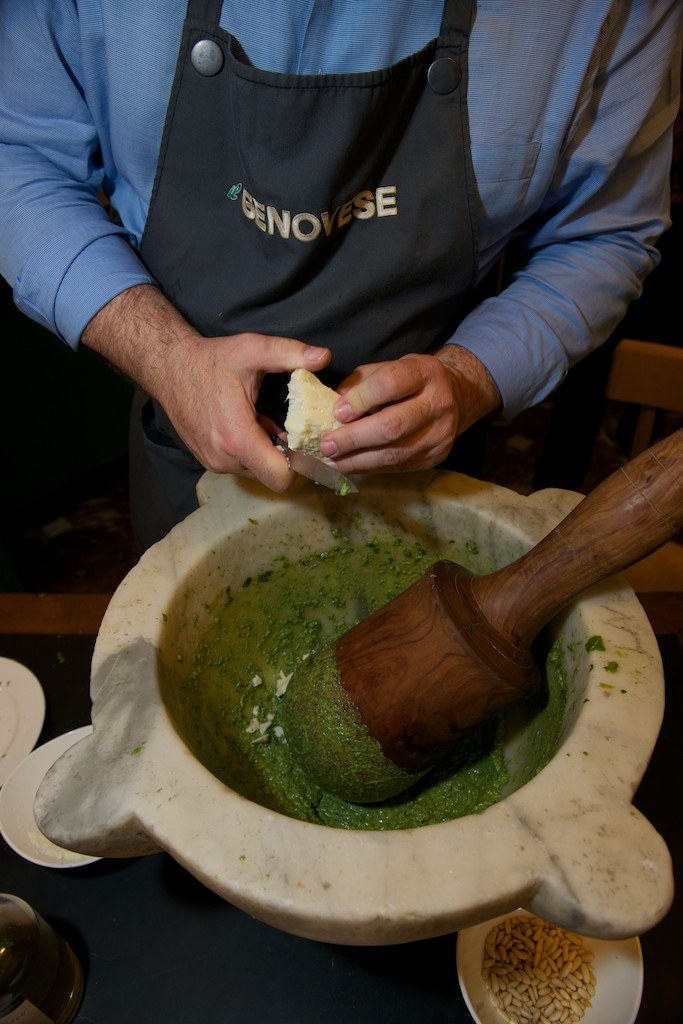 Cheese and extra-virgin olive oil are massaged in only at the end.

But Panizza wouldn’t let me take his word for any of this. He insisted I drive an hour south, following the Ligurian Sea, then take a sharp left inward and upward into the tiny mountaintop town of Campo di Ne. There, beyond a church tower and a parade of devotees reenacting the procession of the cross—up the mountain and bearing full-sized crucifixes—I would find La Brinca, a farm-fed, family-run trattoria. And there, I would find more excellent pesto.

And so I did. As I ate four pesto-drenched dishes—chestnut flour gnocchetti, potato gnochetti, a local pancake-like flatbread called testaieu, and a ribbon-ish pasta called taglierini—overlooking terraced vineyards as green as the sauce, chef-son Simone Circella offered an additional lesson: Order matters. Much.

We tend to dump all the ingredients at once into the processor, then hit the button. Trouble is, that treats everything the same. But great pesto isn’t merely a paste of a few ingredients, nor just the ratios that balance them. The order in which they are combined determines how thoroughly they are crushed, an equation that changes the flavor and texture of the finished pesto.

The pine nuts and garlic should be creamy and smooth. The basil should be pulverized, not pureed, with distinct flecks of leaf. The cheese should be granular, retaining some texture even after the pesto is tossed with the hot pasta. None of those distinctions is possible if all the ingredients are mashed—or processed—at once.

Tackling this recipe back at Milk Street posed challenges. Changing our ratios of ingredients—more basil, less garlic and oil—was easy. Changing the order we add the ingredients to ensure each is treated properly, also easy. Overcoming the fact that most Americans don’t have giant marble mortars? Less easy.

A frustrating complication: Panizza was right—pesto made with a mortar and pestle does taste better. That’s because the pureeing action of the processor releases more water from the basil, thinning the flavor of the sauce and creating a uniformity of texture. But when the herb is crushed by hand, less water is released and the leaves are reduced to tiny flavor- and aroma-rich shreds that taste and feel better in our mouths.

And there was another problem. The basil used in Genoa is smaller and more tender, making it easy to crush. The basil in most American grocery stores is more mature and tougher, with leaves four or five times the size. When we followed Panizza’s recipe using American basil in a mortar and pestle, we developed sore arms and still never got the proper texture.

Our solution required us to ignore his advice (no food processor) and adhere strictly to Circella’s (order above all). With a bit of trial and error, we found that the processor did an excellent job of reducing the garlic and pine nuts to a smooth paste and—with careful pulsing—it didn’t overprocess the cheeses.

We then added the basil. Putting the leaves in whole didn’t work; reducing them to fine shreds required too much processing. But if we used a knife to coarsely chop the basil before adding it—and then pulsed just a few times—we were able to get the perfect shreds we wanted without risk of pureeing.

Panizza might not approve of our method—and we admit we miss the romance of using the mortar and pestle—but we were thrilled that our food processor version nearly matched the flavor and texture of his pesto.

Cook 12 ounces dried pasta in 4 quarts boiling water seasoned with 2 tablespoons kosher salt until al dente. Reserve ½ cup of the pasta cooking water, then drain the pasta. Transfer to a large warmed bowl and top with 1 cup pesto alla Genovese. Pour in ⅓ cup of the reserved cooking water for long pasta shapes (such as linguine and spaghetti) or ¼ cup water for short pasta shapes (such as fusilli and penne). Toss to combine at the table.