Adil Bourachdi’s double-wheeled cart trundles ahead of him, bouncing over uneven cobblestones as he winds his way through narrow stone alleyways painted ocher, blue and pink. He hauls three massive stainless steel stockpots, lids clamped tight, each sloshing some 60 servings of stew that perfume the passages with an amalgam of savory richness, spice and sweetness.

It’s a meandering half-mile path to his corner of the medina, his slot in the labyrinthine marketplace of 10,000 shops that make up the bustling inner city of Fes, Morocco.

Bourachdi wedges each tankard into his stand, setting them above propane burners that quickly return the stew to a simmer. He will spend the evening selling steaming bowls of his mother’s harira, a seductively simple marriage of tomato, beans, beef and broth, all brought vibrantly to life with a generous dose of spicy harissa.

“It’s many spices, many legumes, the beef and spices. I think 100 spices!” he explains, standing under a Quranic banner that reads, “God will suffice. He is all hearing and all knowing.” “It’s only delicious because of my mother’s fingers. I could make the same soup, respect the same ingredients, but it will never be the same because the secret ingredient is her fingers.”

The instant Bourachdi opens for business, customers line up. Passing workers. Officers from the police station down the alley. Housewives who ask for it to be ladled directly into their empty saucepans so they can reheat it at home for their families. Over the course of the evening, Bourachdi will dole out all 180 bowls, charging 5 dirham each, or about 50 cents. Add a hunk of bread, a lemon wedge and a slice of honey cake, and the price goes to 10 dirham.

But he won’t sell them all. He is under strict orders from his mother—who cooks the harira overnight at their home and splits the proceeds with him 50-50—to give generous bowls of her stew to anyone who can’t afford to pay. So to the rhythm of Arabic rap music thudding from a speaker tethered to the overhang of his stall, Bourachdi gives away at least 30 bowls each night.

When I sit at the plastic table alongside Bourachdi’s cart, bowlful of harira in front of me, I understand the eagerness of the crowd. He joins me to share stories of his family’s business, but I am distracted by the harira. Its flavors are deep and complex with spice, though the soup itself is simple. It is home cooking. It is comfort. It is everything you want in a bowl.

Traditionally, harira was served during Ramadan as a way to break the fast in the evening. But it has evolved into an everyday stew eaten by everyone, particularly workers wanting a filling meal en route to or from the job. It’s why Bourachdi’s stand is stationed at one of the medina’s high-traffic crossroads of workers, shoppers and tourists.

We visited Bourachdi’s home hoping to learn her recipe, but his mother insisted on keeping it a family secret. An understandable caveat in a city of dozens, perhaps hundreds of similar vendors. So to master this stew with a taste that belies its simplicity, we turned to home cook and seamstress Houda Mehdi, who offered us a lesson in her equally delicious version.

Mehdi’s kitchen is a tiny white tile alcove off a massive fruit tree-filled courtyard, the center of the family’s 438-year-old home. She, her husband and their children are the sixth generation of the family to live there. She learned to prepare harira from her mother, who still treated it as a special occasion dish she and Mehdi would make mostly for guests and holidays.

Her version called for lamb, though she said beef and chicken are just as common. She combined that with red onion, olive oil, chopped tomatoes, turmeric, celery, cilantro, soaked chickpeas and water, then pressure cooked it all for about 45 minutes, until the lamb was fork tender. The aroma was alluring and quickly filled the courtyard, mingling with the citrus growing around us and the steaming and wonderfully sweet mint tea Mehdi served as we waited.

To thicken the stew, she diverged from tradition, which typically calls for a roux of flour and fat. Instead, Mehdi prefers to puree cooked potatoes and other vegetables, a choice that not only thickens and adds velvety texture, it also gently sweetens the stew without contributing the sometimes dulling effect of flour. Along with the puree, she also stirred in tomato paste, which both enriched and sweetened the dish.

The finishing flourishes included more cilantro and a squeeze of lemon, a 5 dirham add-on at Bourachdi’s stall (and one that adds a balancing brightness that makes it well worth the splurge). Simple. Simply delicious.

For our version, we followed the lead of Bourachdi’s mother, allowing the stew to slowly simmer (that much we were able to learn from her). As for seasonings, harissa, turmeric and tomato paste were all we needed to get rich depth. A stew well worth the wait in the medina or the (minimal) effort at home.

Adil Bourachdi hauls tankards of harira made by his mother through the alleyways of Fes to the stand where he sells 180 bowls each night. 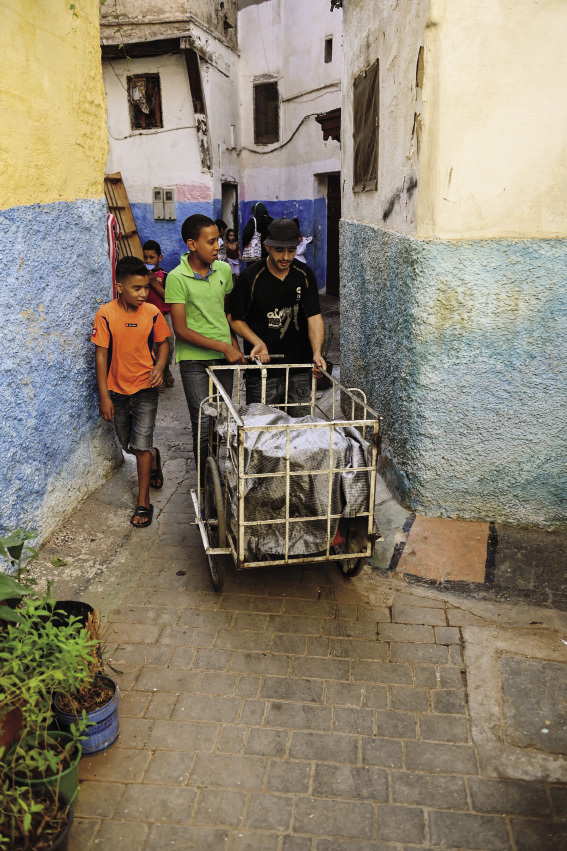 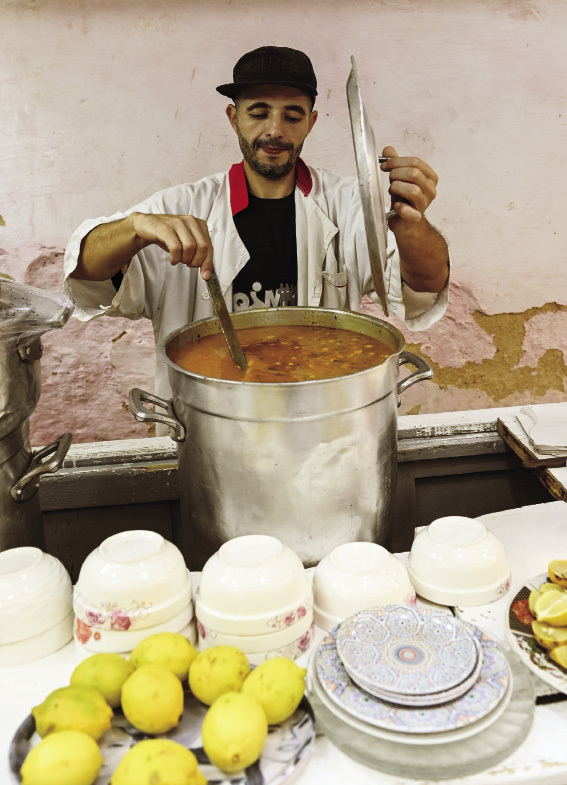 The Creamiest Pesto Has No Cheese, Nuts or Basil!
This Chocolate Pudding Has a Secret
Dry Curried Winter Squash
There’s Worcestershire in My Ceviche!