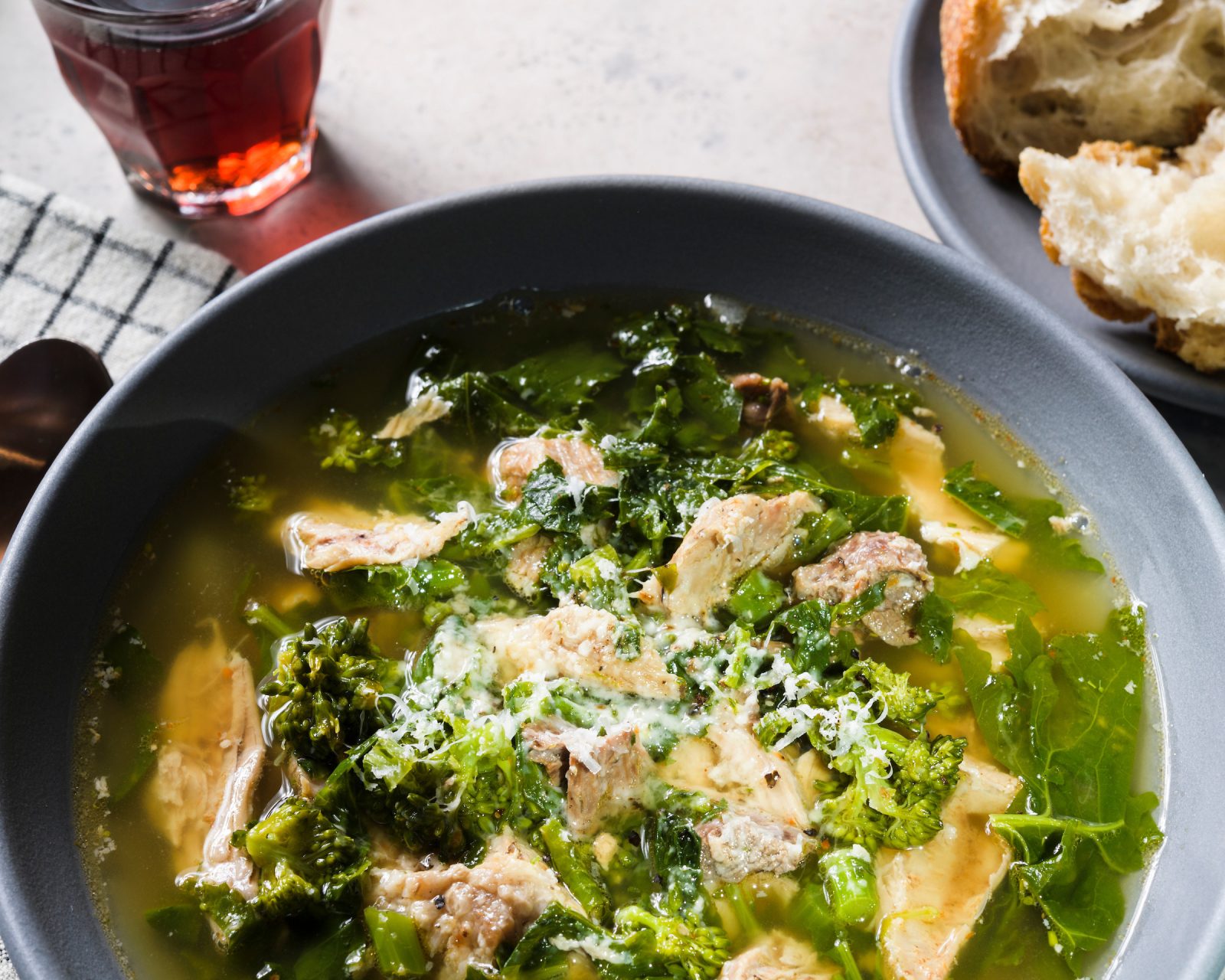 The name of the dish on which this recipe is based is minestra maritata, which translates from the Italian as “married soup.” It is not the Italian wedding soup of meatballs, greens and pasta that’s popular in the U.S., though the two do share similarities. At the family-owned restaurant La Tavernetta Vittozzi in Naples, we were taught how to make the Campanian version of the classic dish, and we used the lessons learned for our own adaptation. As in Naples, the meats in our recipe are bone-in cuts of beef and pork that give the broth richness and body. But for easier eating, after cooking we shred the meat and discard the bones. Pancetta also simmers in the mix along with a piece of Parmesan rind, each lending even more savoriness to the broth. La Tavernetta Vittozzi uses three different varieties of wintry greens in their minestra maritata—cabbage, broccoli rabe and escarole, the latter two blanched separately before they are added to the soup. (This “marriage” of cooked greens and broth is what gives the dish its name.) To streamline, we opt for rabe or escarole (or a combination, if it suits you) and we simmer the vegetable directly in the broth. Rabe offers an assertive bitterness that nicely balances the richness of the soup; escarole is milder and cooks down to a silky, supple texture. Warm, crusty bread is the perfect accompaniment.

Don’t bother with precision when prepping the onion, carrots and celery. The aromatics are simmered in the broth for flavor, but later are scooped out and discarded. If using escarole, be sure to wash it thoroughly as the frilly leaves tend to trap a good amount of grit.

Reviews
Roberto P.
Incredible soup
Just replying to the one star - I’ve made this a few times already- and two hours was adequate for the tissue to breakdown and shred beautifully.
Lynn E.
The best version of Italian wedding soup!
this recipe is worth the time -- it&#x27;s so rich with flavor and unlike any other soup--and certainly any other Italian wedding soup we&#x27;ve ever had! I&#x27;ve made it twice and the second time I allowed the broth to cool in the refrigerator overnight and it was more productive to skim off all the fat from that broth that way--soup was still very rich but less oily.
Justin S.
No
It’s connective meat and broth. 2 hours worth of simmering was not enough to break down the connective tissue. These kinds of meats need to be braised for several hours first.
Randy V.
No title
I cooled the soup and used a plastic bag in order to get the fat off of the top. Also two hours is perfect for extracting the marrow from the beef shank. I incorporated into the soup but you could set aside and spread on toasted crusty bread!
Become A Subscriber To Rate and Review All Our Recipes.
Please Log in or join today for $1.