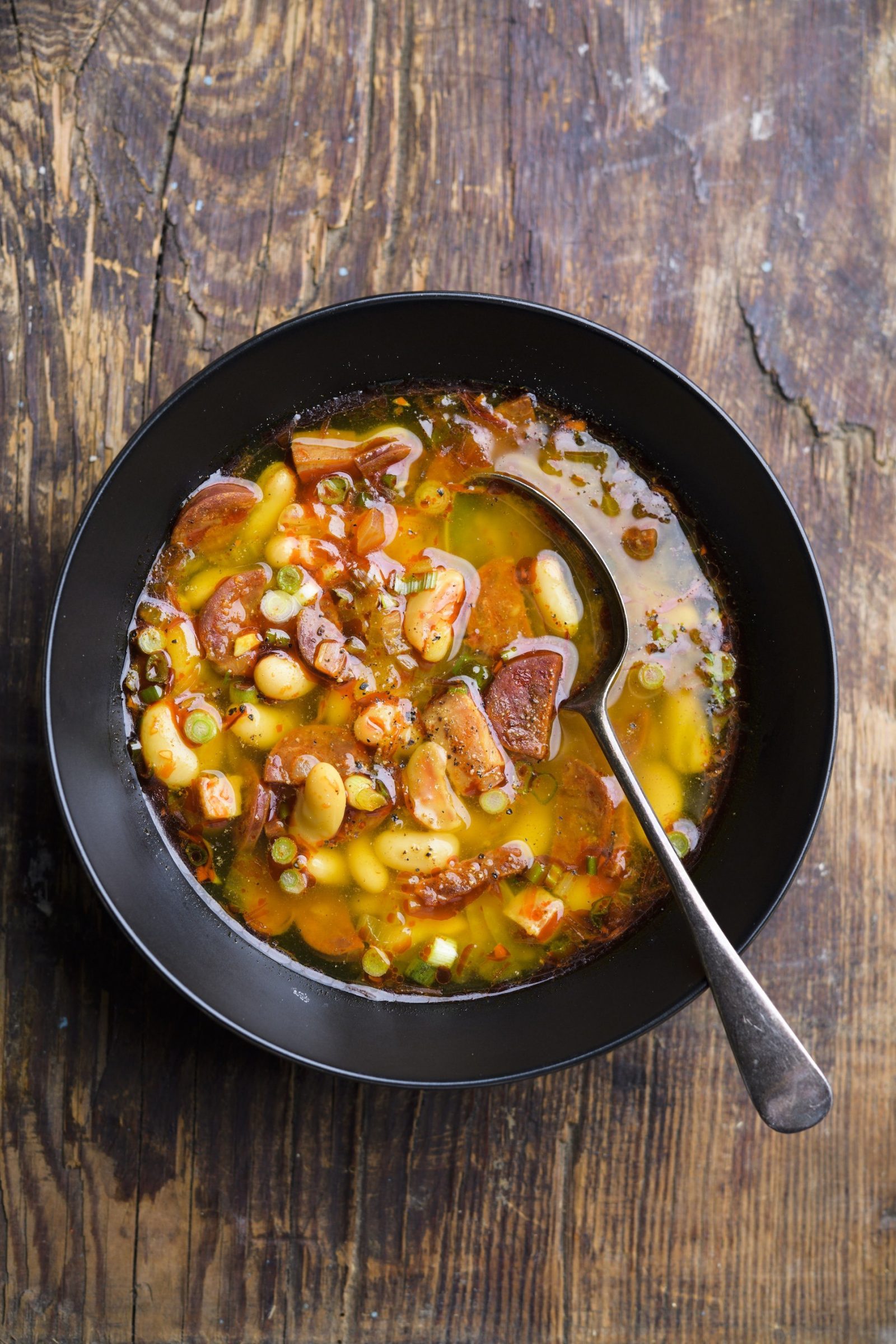 This is a quick-and-easy version of the Spanish tapa known as fabada asturiana, a hearty stew of dried beans, sausage and other smoky, porky ingredients. We pared back on the meats, using only chorizo and ham, both of which lend deep flavor to the broth. The dish gets its name from the large beans that are traditionally used in its preparation, but we found that canned white beans worked well. We especially liked the relatively large size and creamy texture of cannellinis, but great northern and navy beans are fine, too. A pinch of saffron adds a very Spanish flavor and fragrance, while giving the stew an alluring golden hue.

Don't overcook the chorizo and ham after adding it to the sautéed onion mixture. If the pieces begin to sear or brown, they'll be chewy and rubbery in the finished dish. Cook only until the chorizo begins to release some of its fat.

Reviews
Stephanie D.
Delish hearty soup
Made per directions and it turned out amazing! Love that it is a quick soup. Perfect use for our leftover Christmas ham and a nice change of flavors. Added it to our favorites list. Thank you!
Vickie S.
Outstanding!
This is a perfect combination of flavors. I would not change a thing, except that I did have to substitute Linguica because they were sold out of Chourizo.
Lorraine G.
can i substitute some Iberico Ham for Ham Steak?
Recipe Looks deliciousm but can i sub iberico jamon for ham steak?

So easy, so delicious and although we cook Spanish dishes once in a while this one - fabada asturiana - was new to us. (One of the things we enjoy of many about Milk Street is these kind of 'introductions'. :-) ) Made per recipe with exception of replacing canned white beans with an equivalent amount of Judion beans that I already had cooked and ready to use. (Judion are a fav at our house. Large white kidney shaped bean from Spain that are sturdy but with creamy interior when cooked, similar to a Faba / Fava broad bean. The Judion Astorga that our local Basque market stocks is Le Catedral brand and can be found at Spanish specialty retailers on line too. ) Otherwise made per recipe for ingredients and technique for delicious outcome. Keeper. Notes: 1) Recipe specifies 4 servings but I'd say more like 6, in particular if you are serving other things with this as part of a tapas style meal. 2) The broth can be reduced by about one-third - recommend starting with less and adding to your preference. 3) Saffron threads lend pretty color but given bold flavor of the chorizo not so sure the saffron flavor isn't lost - next time I may try subbing paprika. 4) Leftovers gently reheated are great.

¿Who told you Fabada is a tapa? You can certainly eat a tapa sized portion, but Fabada is a main course. Typically, the Spanish eat it for lunch because they consider it too heavy for dinner, especially when it includes all the usual meats. The chorizo is usually in small chunks, better 'chew' factor than thin slices. Thanks for handy quick version. ¡Buen provecho!

I plan to make this tonight, but it strikes me that with a few simple modifications this recipe could easily feature fish instead of ham: swap cod for ham, and fish stock for chicken stock. Any thoughts?

We encourage the kitchen improv so please report back! One suggestion would be cooking the fish whole and then breaking it into chunks (another one of our new rules) to ensure it doesn't overcook. Take a look at the following recipe for insight: https://www.177milkstreet.com/recipes/brazilian-fish-stew-moqueca

So easy, delicious and satisfying!

Fast and easy. I made it for lunch and next time might throw in a little kale for a complete one pot meal. I added some saffron I brought back from Spain last year and loved the subtle flavor it adds against the Smokey Spanish chorizo.

This stew has so much potential if it was simmered longer. It had the promise of being an amazing dish but lacked depth of flavor. It should be a 6 hour stew vs. 30 min. I'd also put in some cut corn on the cob to add a little sweetness and heighten the taste.

I followed several of the previous reviewers recommendations - paprika instead of saffron, 2 C less stock, and simmered for 4 hours. For people who work from home, this would be great to prep at lunch time, throw in the slow cooker, and eat at dinner.