Naples Is Known for Its Pizza. We Went for the Meatballs. | Christopher Kimball’s Milk Street

The world of fermentation.

We visit Chef Olia Hercules to learn some Ukranian classics.

In bold heaps and gilded piles, Christmas spills from doorways along Via San Gregorio Armeno, a cobblestone alley dedicated to a peculiar Neapolitan tradition—the assembling of elaborate, often offbeat home Nativity scenes. Dozens of artisans craft and sell miniature characters: Joseph, Mary, Jesus, the Magi, of course, but also lesser-known attendees at the birth of Christ—the pizza maker, the butcher with charcuterie, the nonna making meatballs. It is Naples, after all.

That last character amused me most as I wound my way past the shops, down toward the Gulf of Naples and into yet another, less festive alley. I’d come to Italy to learn this city’s way with meatballs. I’d been told one bite would change the way I thought about this simple red sauce dish. That seemed a stretch. But then again, if they were good enough for Jesus...

Down that new alley, I was greeted by yet more heaps and piles. This time in the windows of Trattoria La Tavernetta. Mounds of eggplant, mushrooms, peppers and zucchini, all glistening, charred and doused in olive oil. Next to them, taped to the glass, a photocopied handwritten menu for the day. Lasagna classica Napoletana al forno. Penne al pomodoro. Calamari fritti. Fettuccine alla Bolognese. And, of course, polpette al sugo. Simply, meatballs with sauce.

Walk into Tavernetta—all white tiles and red brick arches—and you quickly realize family is as foremost as food. Five sisters, their parents and their grandmother, Maria Grazia Cibelli. At 74, she holds forth in the tiny kitchen, assembling that lasagna, carefully layering one sheet of noodles, one ladle of ragu, one handful of tiny meatballs at a time. She was so good a cook at home, she opened a restaurant back in the ’70s. Her family followed her. 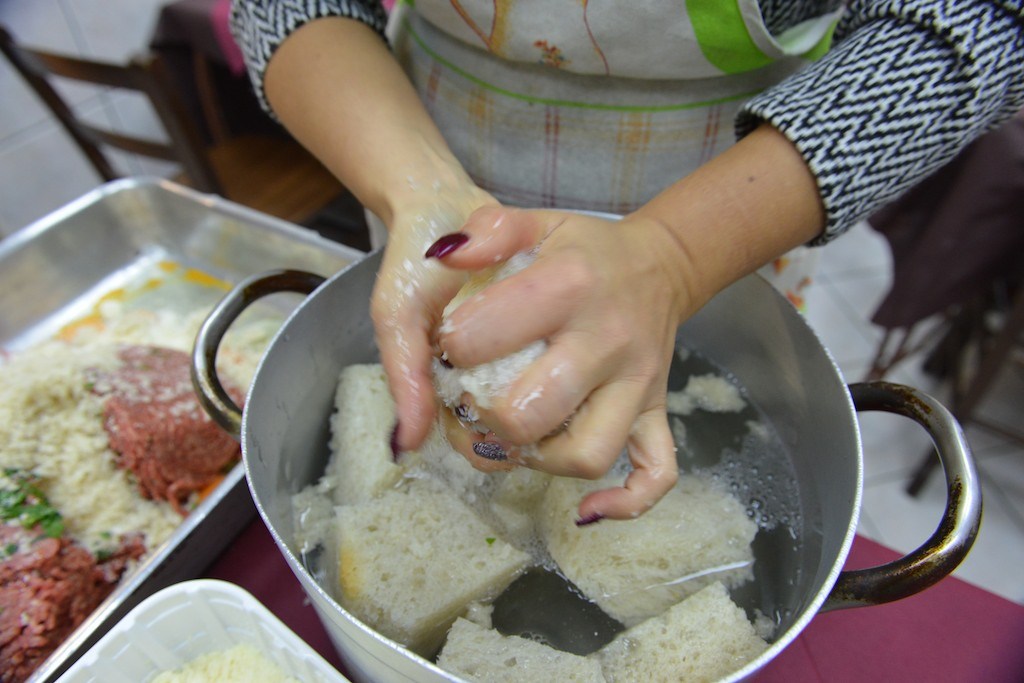 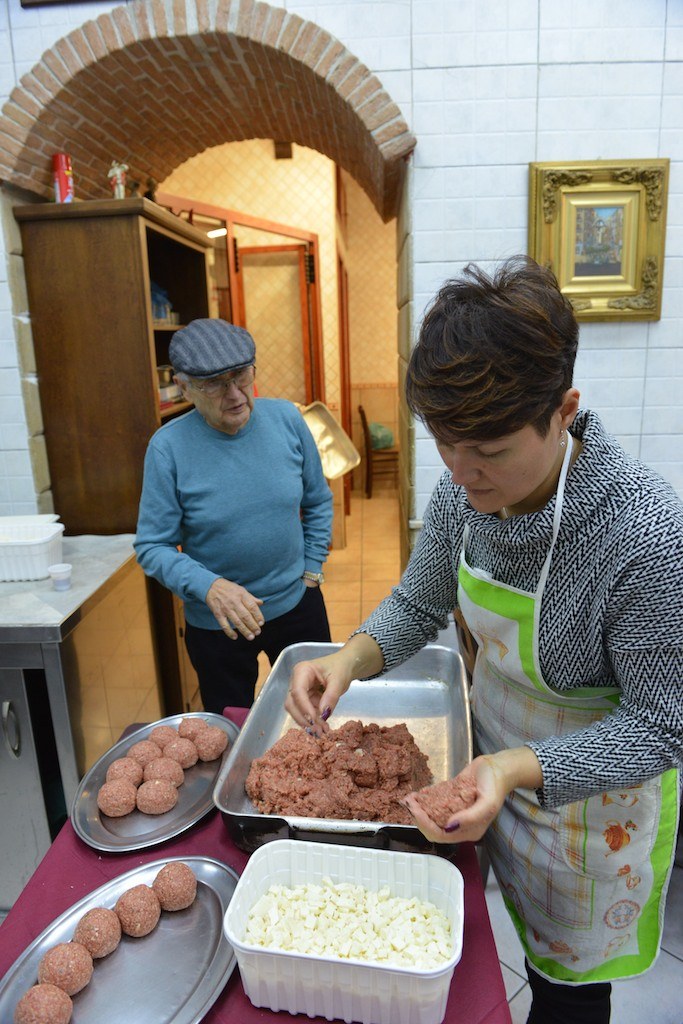 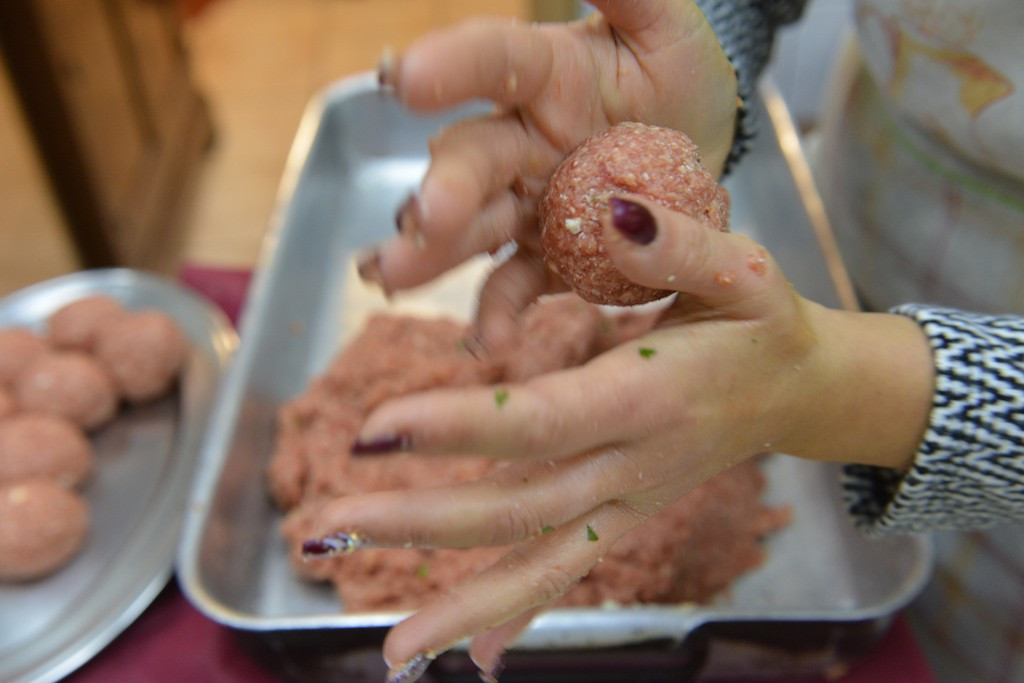 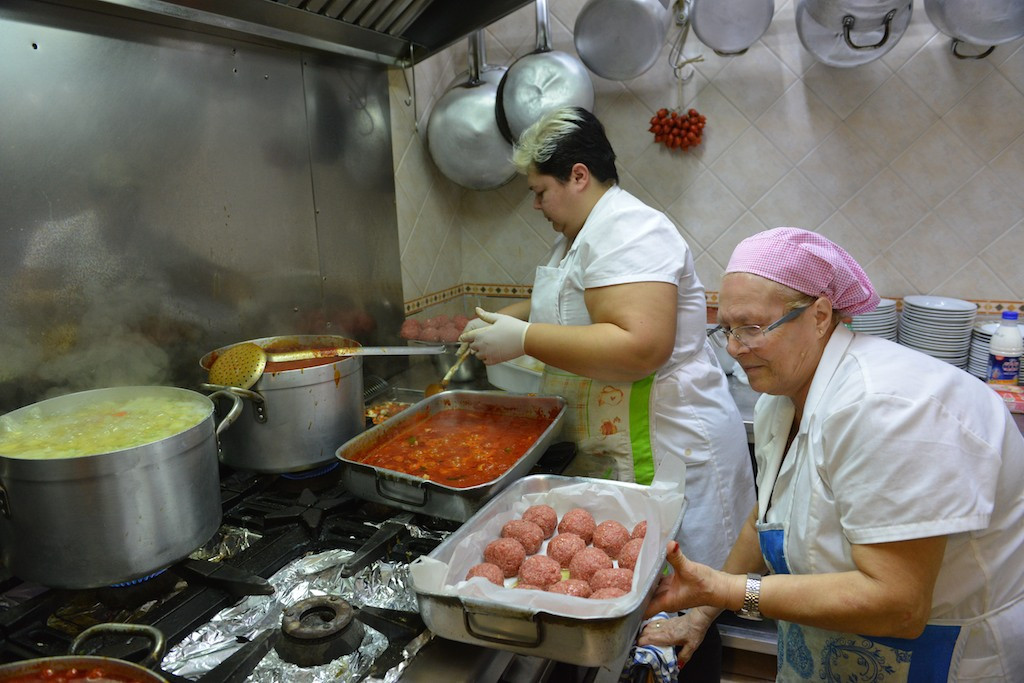 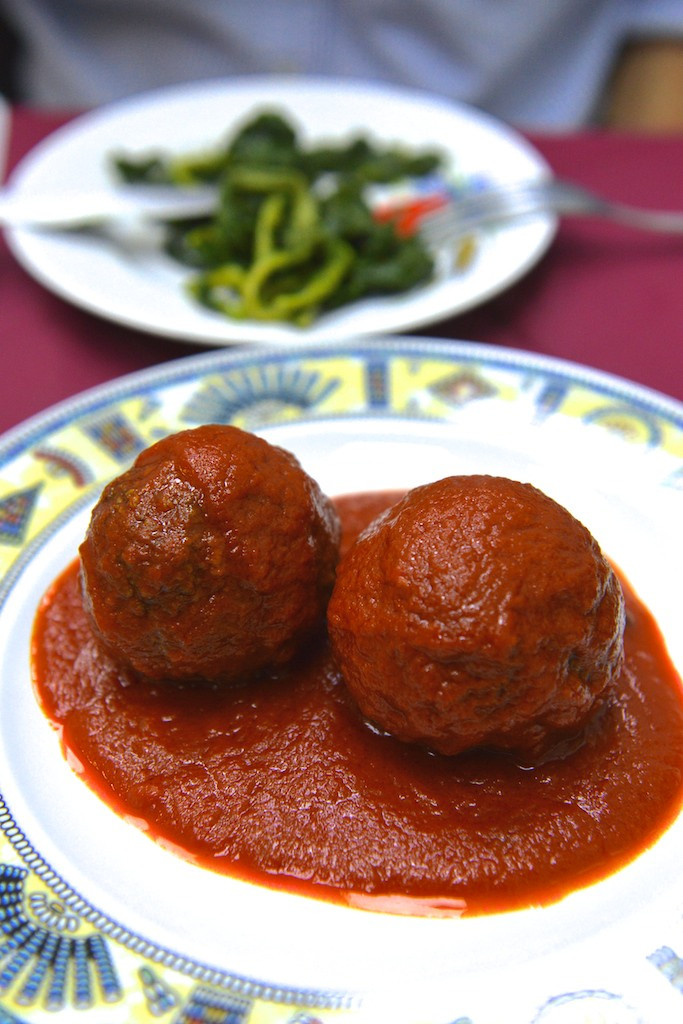 I sit at one of the restaurant’s nine tables and order as many dishes as it will hold. House wine is poured from a chilled carafe. The room hushes unexpectedly. Enza Vittozzi, one of the sisters, offers an impromptu performance. Still in her apron and standing nearly motionless beneath the archway that separates dining room from kitchen, she opens her mouth. Her voice builds and expands, reverberating. “Ave Maria” washes over the room, wine glasses vibrating, the song a presence itself. A classically trained opera singer. The family restaurant is Enza’s side gig between performances. Today it also serves as her stage.

As applause erupts, the food arrives. Cibelli’s lasagna is rich, sweet and meaty, those tiny meatballs tucked between layers of cheese and pasta. Pasta Genovese, a tangle of caramelized onions and noodles, all studded with bits of beef that add seasoning more than substance. A simple broccoli, mostly leaves, blanched, browned and bathed in a mix of red pepper flakes, olive oil and bold garlic.

But without question the meatballs are the star of the impressive spread. Two massive orbs of ground beef set in a shallow pool of ragu, red and glistening. They are served as often with pasta as without. Today, they stand alone. One bite and I understand their inclusion in the Nativity. Based on size alone, I expect them to be dense and heavy, but instead they are deceptively light. My fork cleaves them easily. They are so tender, I can’t believe they hold their shape. The taste is meaty, savory, rich and balanced by the sweet, smooth ragu. Plenty of wine and these meatballs are all I need.

Credit for the meatballs goes to another sister, Rosa Vittozzi. She walks me through the recipe, but it is so minimalist—and the ingredients so common—it’s hard to understand how they combine to make meatballs so different from and so much better than any I’ve ever had. Cheese, eggs, parsley, bread and beef hardly represent a dramatic departure from the norm. So Rosa invites me to return a few mornings later to watch her make them.

At Trattoria La Tavernetta, the polpette al sugo–meatballs with sauce– are almost impossibly tender and light. And if you are lucky, they will be served with a side of opera.

When I arrive that day by 10:30 a.m., the restaurant already is a fluster of activity. Piles of produce are scattered across the dining room tables, the sisters having turned the space into prep areas. Rosa has spread the meatball ingredients over several. In a large pot, the soft, white innards of numerous sourdough loaves soak in water. In a large metal tray, eggs have been cracked over a mound of ground beef. Parsley and grated pecorino Romano and Parmesan cheeses round it out.

A handful at a time, over and again, she plucks large hunks of bread from the water and squeezes them like a sponge before adding them to the meat and eggs. Soon, the beef is obscured by the bread. So much bread. Surely too much bread. Then she adds the cheeses and parsley and begins to knead. When the mixture is uniform, she grabs a tennis ball of it and, with hands so fast they blur, rolls it between her palms, at times making it almost levitate.

With all that bread I was certain the meatballs would collapse, but she hardly was gentle with them. From here, they can be pan-fried or roasted before finishing in a ragu of little more than olive oil, tomato sauce and fresh basil. When I taste them, again the tenderness amazes me. Despite their size, I eat two without the usual meat bomb belly feeling.

As I continue to eat meatballs across Naples, I learn that the volume of bread indeed is what sets them apart. Rosa uses a mixture that called for 25 percent bread, but some cooks go as high as 40 percent. All of which explains why they are so tender and moist. And despite my concerns, the bread (helped by the eggs) acts a binder, helping them keep their shape even through multiple stages of cooking.

Back at Milk Street, this was an easy adaptation. We stuck close to Rosa’s recipe, including her simple ragu. The one glitch? We struggled to get consistent results when soaking and squeezing the bread. We suspect Rosa’s years of practice make it easy for her. For us the easy part was getting it wrong—with bread too moist or squeezed too dry. We also found that bread variety mattered greatly in how it retained water.

Our simple solution—panko breadcrumbs. The coarse white crumbs held moisture consistently and evenly, and required no squeezing. And we noticed no difference between the meatballs made with them and those with bread. The only thing we couldn’t replicate? Enza’s generous helping of “Ave Maria.” 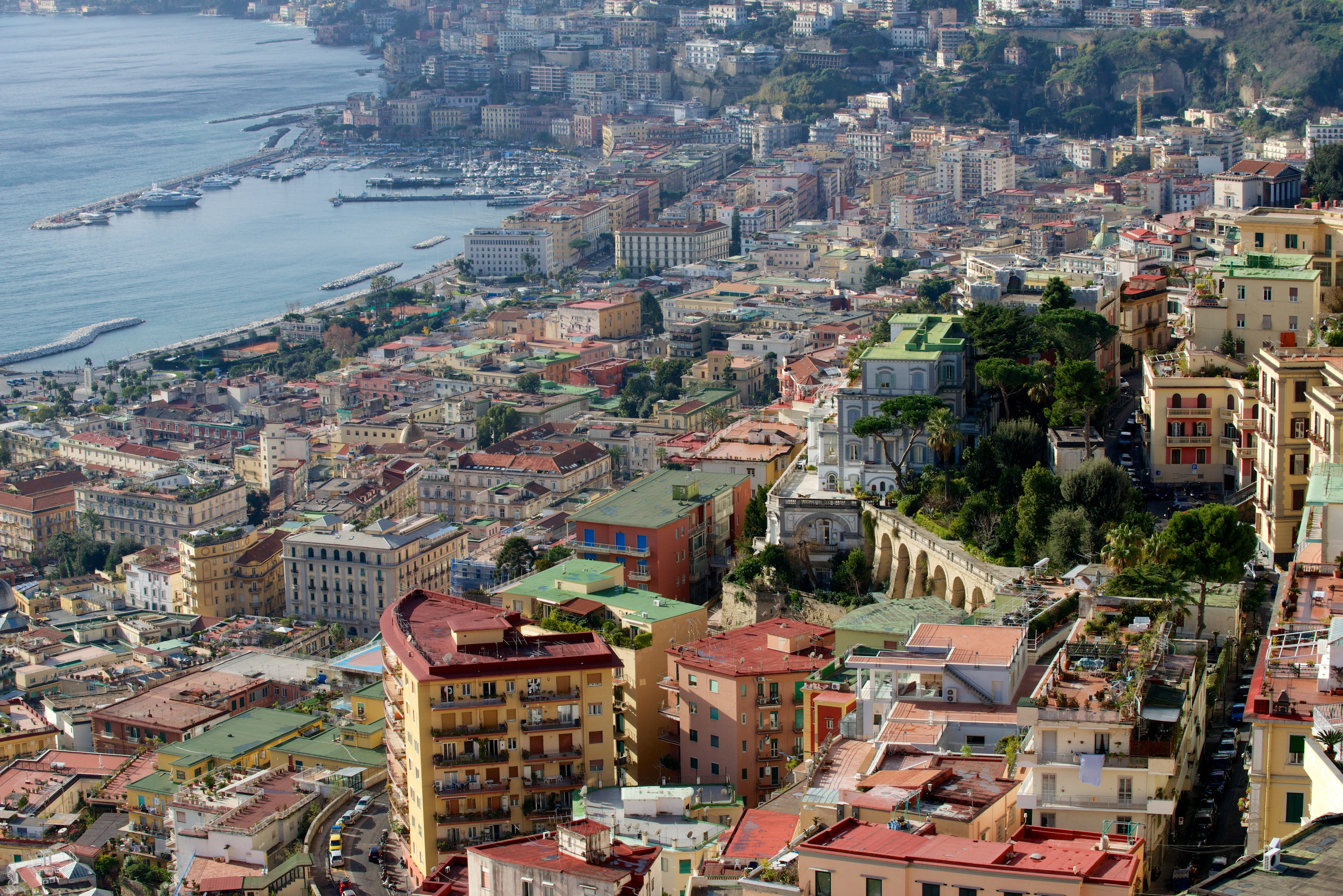 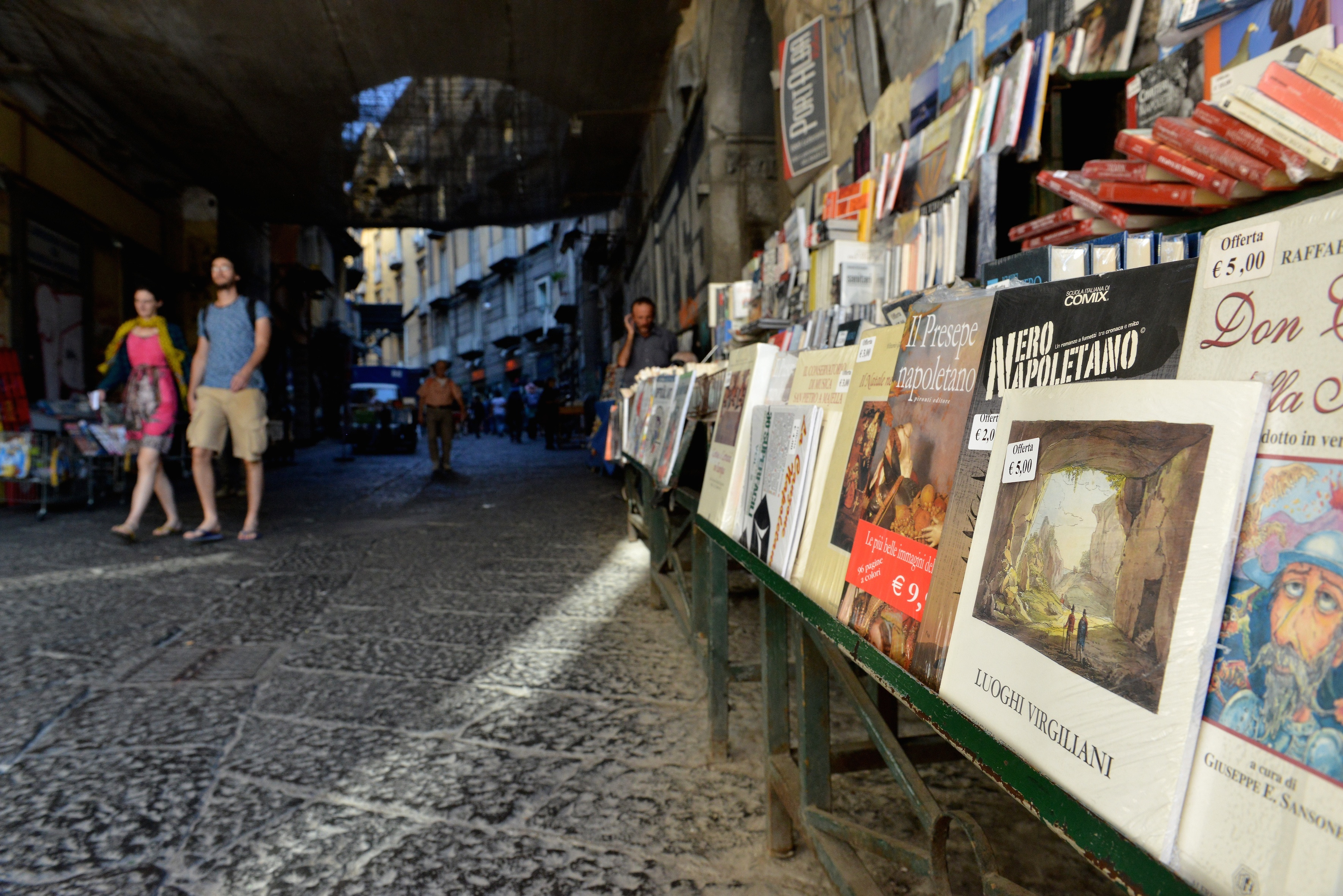 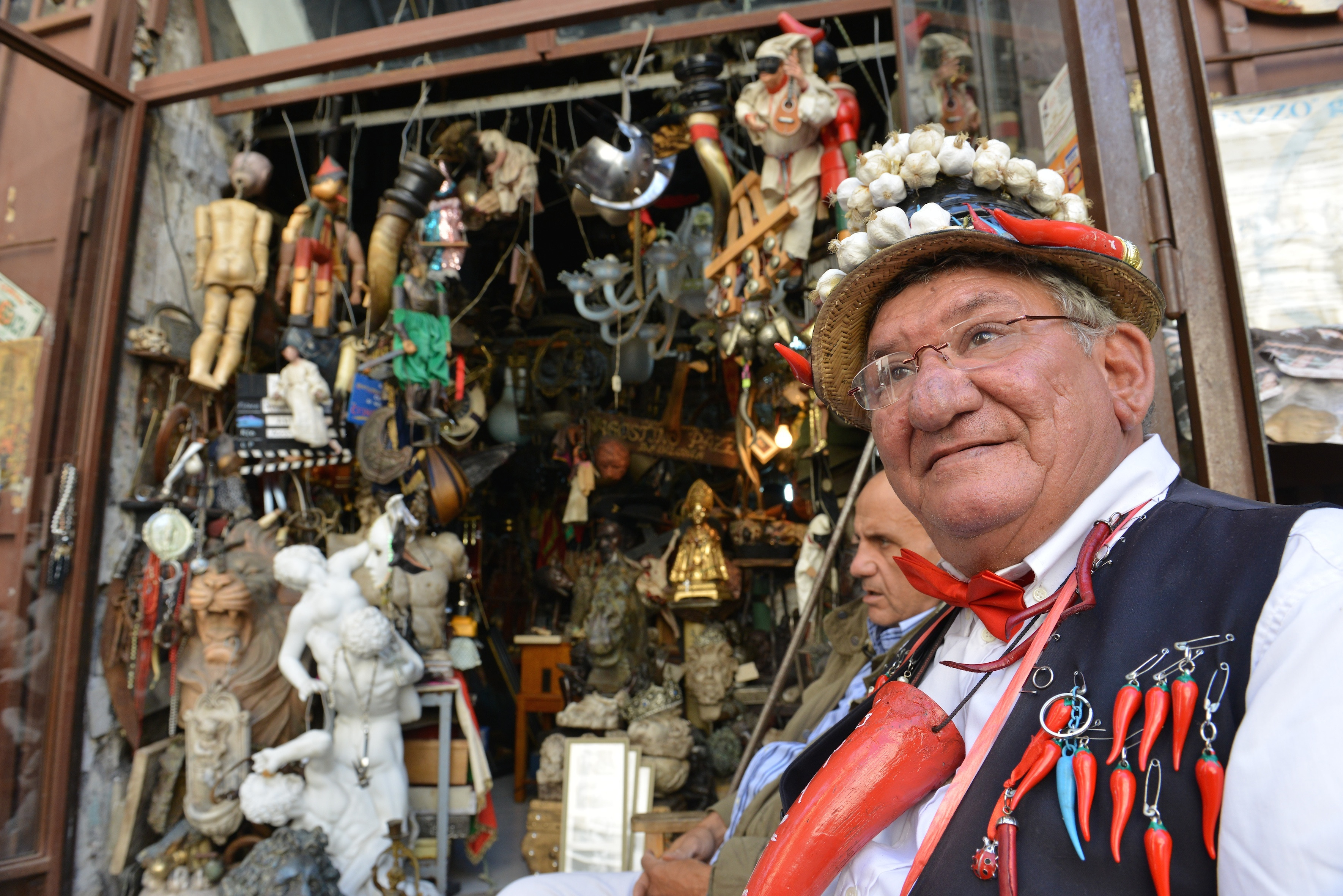 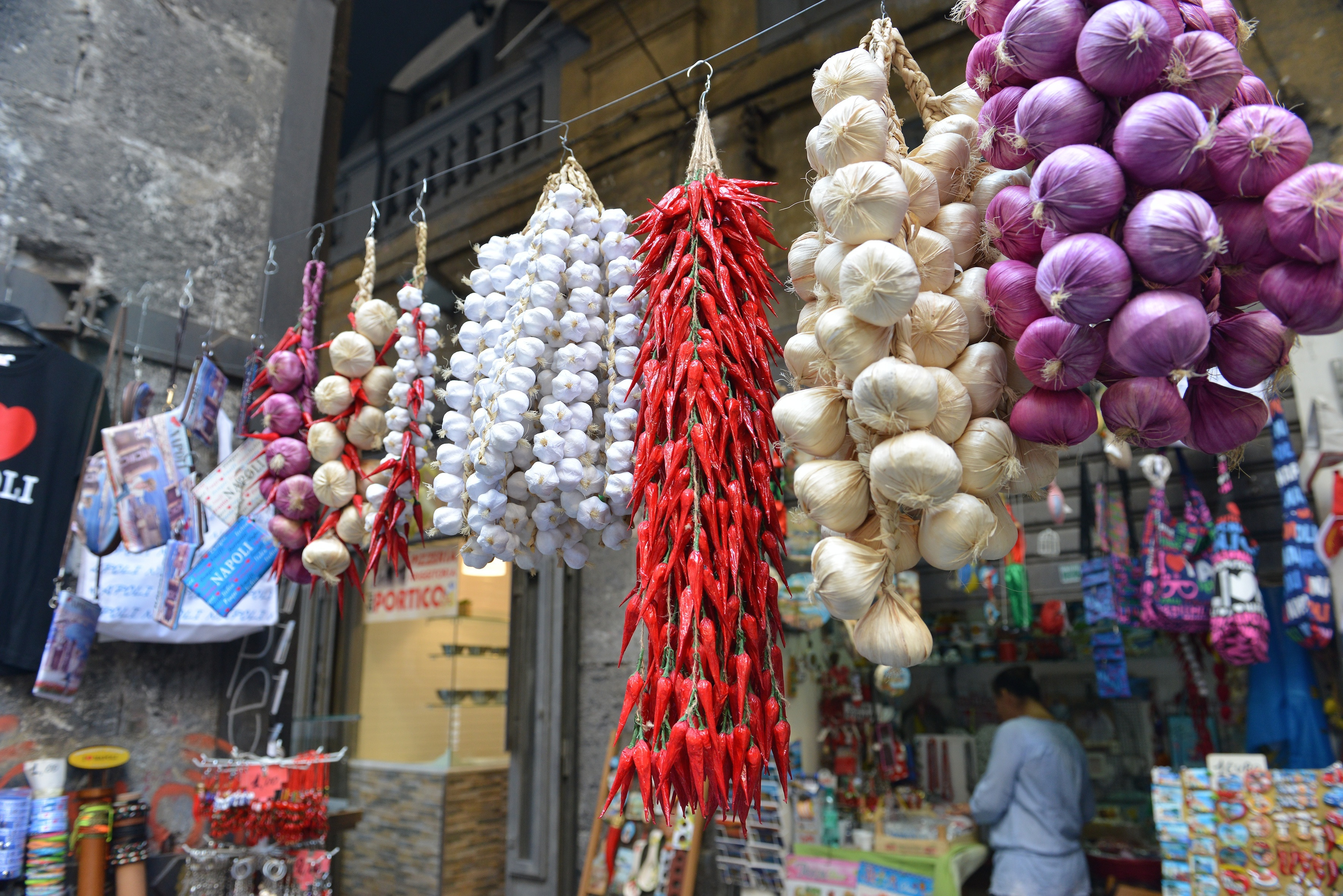 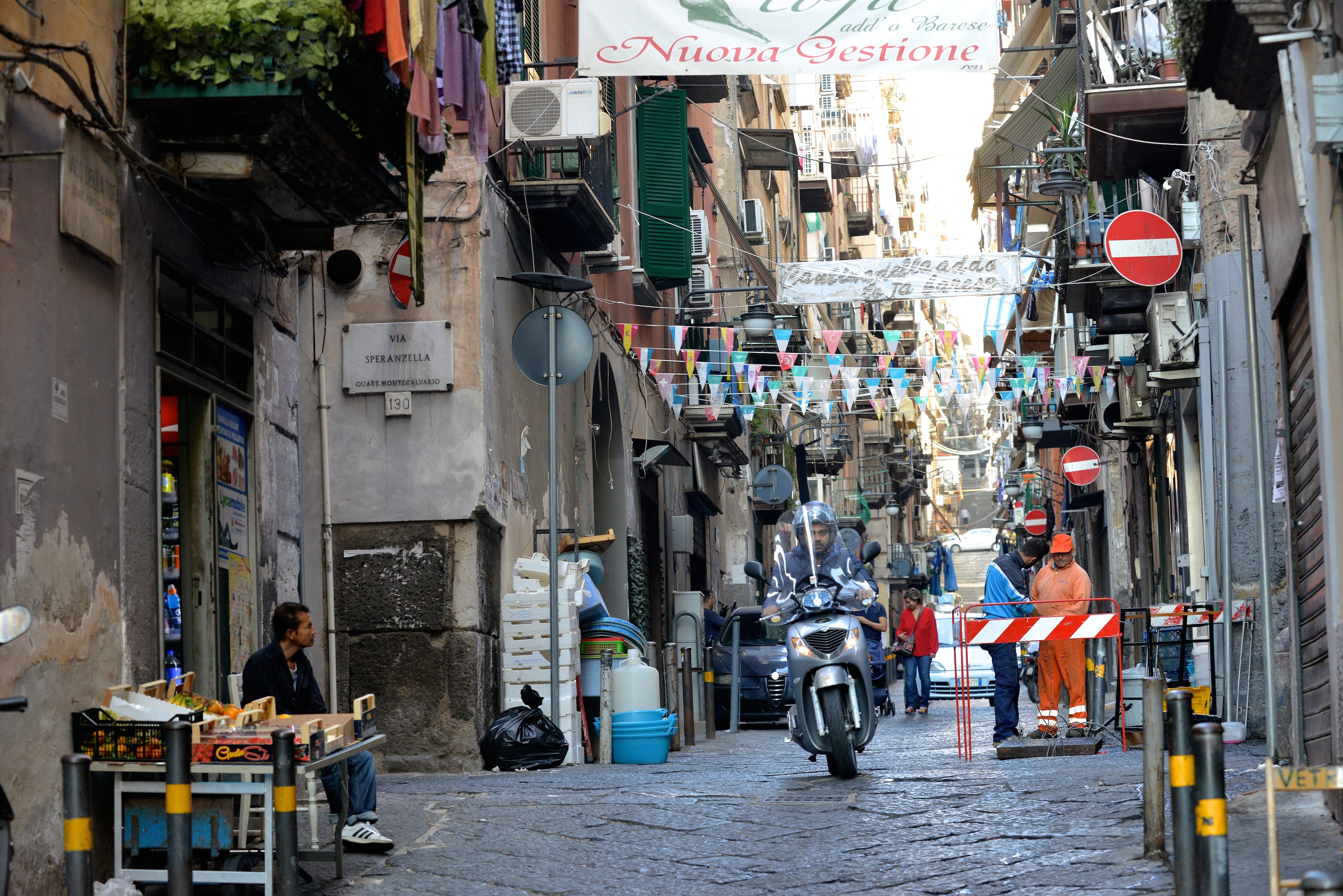 In Naples, we learn the secret for the world’s most tender meatballs
Neapolitan Meatballs with Ragù