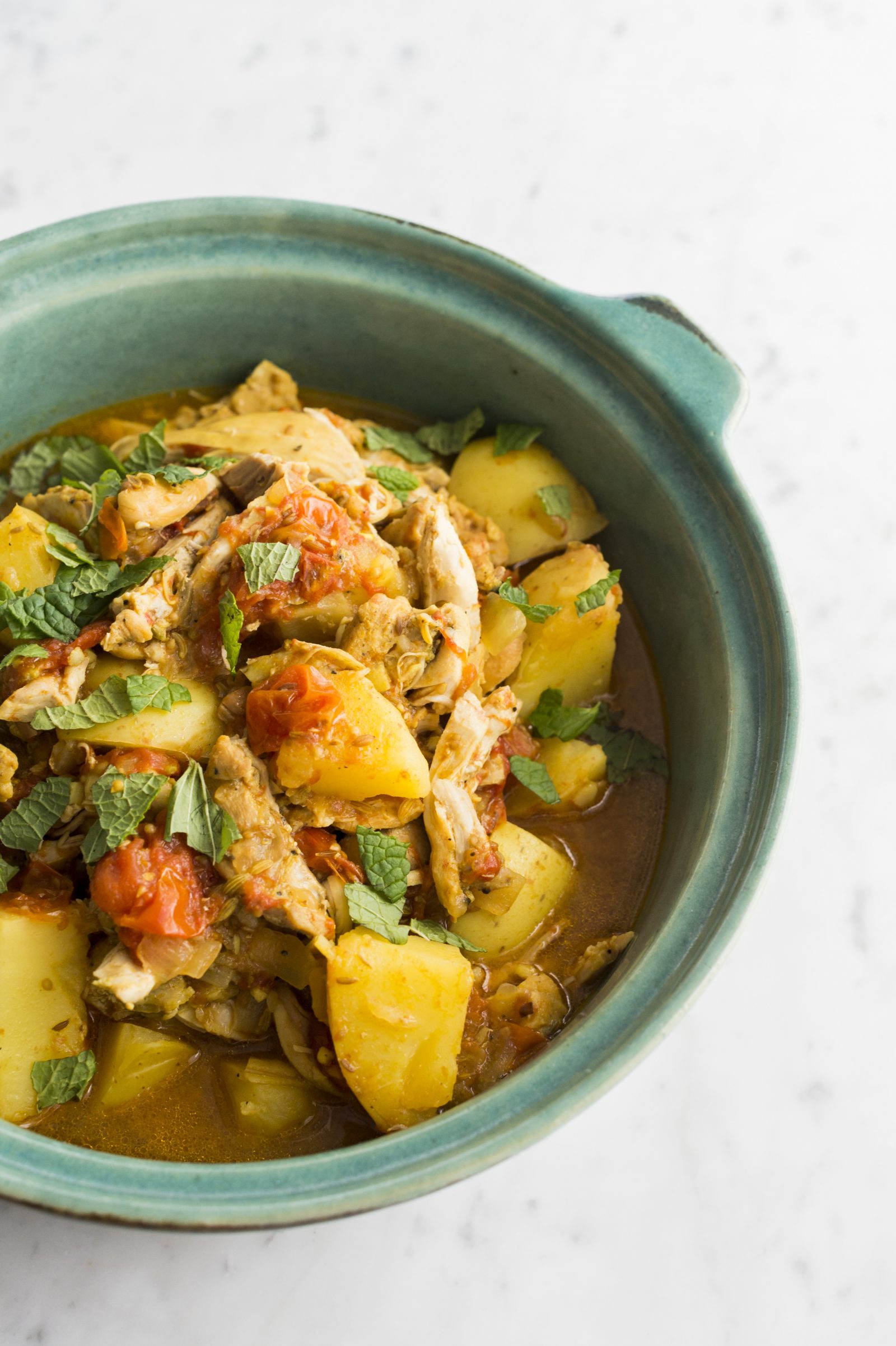 Lemony and richly savory, Cape Malay curry is a chicken and vegetable one-pot from South Africa. Its ingredients are similar to those in Indian curries, but the techniques are different, creating a refreshingly light curry. Spices, for instance, aren't ground but are dropped, whole, into the broth and often discarded just before serving. We learned to make it from Cape Malay cooking expert Faldela Tolker at her home in Cape Town's Bo-Kaap neighborhood. Like Tolker, we built the flavor base of our Cape Malay curry on lightly browned onions. We also used whole fennel seed and cumin seed, allowing them to add both texture and flavor. Tolker broke down a whole chicken for her dish, but we liked the ease of boneless, skinless thighs, which stay moister and taste richer than chicken breasts.

Don’t forget to remove the ginger, cinnamon sticks, bay leaves and chili halves from the cooking liquid after removing the chicken. Also, don’t cut the potatoes smaller than 1-inch chunks; smaller pieces will overcook and break apart. Finally, don’t pull the chicken into fine shreds after simmering—the pieces should be bite-size.

Reviews
Janice N.
SO GOOD
Wonderful flavors all in one pot! Makes a terrific leftover.
Aniz S.
Original taste
This recipe so far has 100% yummy review from all the guests and friends spread over 7 different occasions. It&#x27;s also very easy to cook and forgiving

I wasn't able to find serrano chilis. Will a couple jalapeños do? Thank you!

Jalapeños are a perfect substitute!

How would you adapt this recipe for an instant pot/pressure cooker? Or would the reduced cooking time not allow the flavors to develop?

This is a great question. Would you post it in our Q&A Forum for Milk Street Insiders and Digital subscribers? I'm sure others would love to hear the answer to this one.

I sauteed the onions in the instantpot for 5 minutes along with the chiles. Then I added the chicken and spices and sauteed another 5 minutes. Then added the rest of the ingredients and did high pressure for 4 minutes with an instant release. Potatoes were cooked and creamy.

In a pressure cooker. Do not bone your thighs. Brown onions. Decrease liquid to 1 C. Add all the rest of the ingredients ( I used fingerling potatoes and did not cut). Put under pressure 12 minute. Let cool down at least 10 minutes. ADD 2 C cooked and drained garbanzo beans. It was lovely and the beans just added to the flavor.

I wonder if the chicken could be removed sooner? The internal temp of the chicken was between 175 & 195 degrees after only 20 minutes of cooking? Seems that might dry it out.

It's possible that your simmer was a little more vigorous than ours. You definitely want the chicken to be tender enough to be able to be pulled into bite-sized pieces. Chicken thighs only begin to lose moisture at 195 degrees, so as long as the chicken is under 195 degrees it should still be moist.

The chunks of ginger look nearly identical to the potatoes. After fishing for 5 minutes, I gave up the search and just forewarned my guests. Does anyone else have this issue, or is it just my eyes? (lol) Regardless, amazing flavor! Definitely a make again. Since I only had a half pint of tomatoes, I added a can of stewed tomatoes (drained) after transferring the chicken in Step 3.

Should the serrano halves be seeded? I presume not; I made the mistake of seeding them and, even with the number of serranos doubled, the spice level was just gentle.

Linda - I think you have answered your own question here! Yes, we recommend keeping the seeds and ribs in the serranos, which will impart a little more heat into the curry. For anyone who is really sensitive to heat, removing the seeds and ribs - where a lot of the capsaicin is concentrated - is a good move, but it sounds like you like heat, so I'd keep them in next time. - April D.