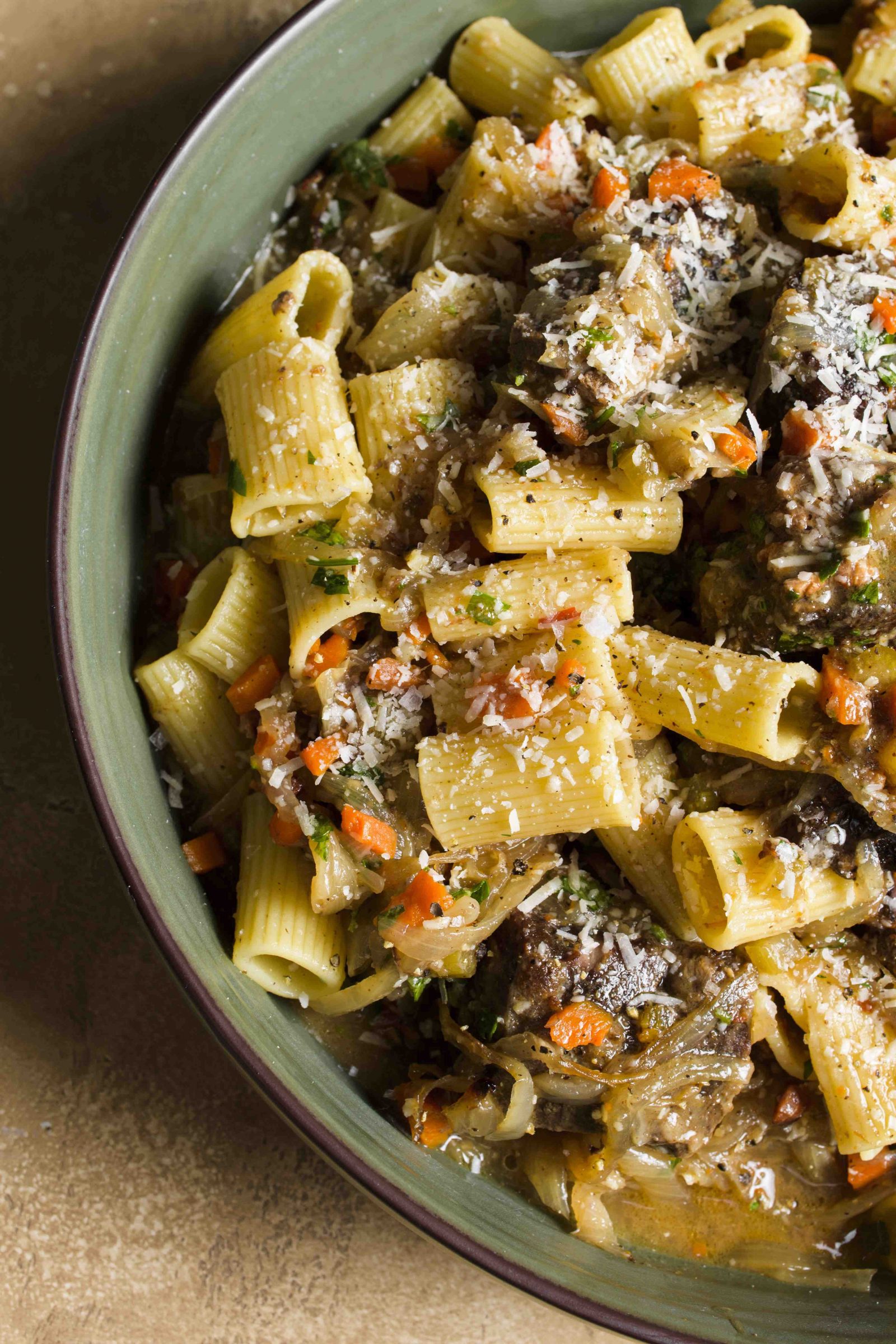 Don’t be fooled by the name of this dish. This is not pasta with Genovese basil pesto, nor is it from Genoa. Rather, the sauce is an onion-based ragù and a classic in the Neapolitan culinary repertoire. (How the sauce acquired its name is unknown, but we were told in Naples that some believe it comes from the Genovese sailors who visited Naples for trade. The theory goes that either they made this dish while in town or—more likely—locals made it for them.) Some versions of pasta alla genovese are meat-free, others include a small amount of beef or veal as a flavoring, but never as a key ingredient. Taking a cue from A’ Cucina Ra’ Casa Mia in Naples, we use boneless beef short ribs in ours. We combine beef, cut into chunks, with carrots, celery and an abundance of onions in a Dutch oven and put the pot into the oven, where the heat is slow and steady, until the meat is tender enough to fall apart when prodded with a fork. Slicing 3 pounds of onions by hand is a good opportunity to hone your knife skills, but if you prefer, they can be sliced on a mandoline. The ragù can be made up to three days ahead, then reheated gently before tossing with just-cooked pasta.

Don’t be concerned that there’s so little liquid in the pot after adding the onions and beef. In the covered pot warmed by the oven heat, the vegetables and meat release moisture that becomes the braising liquid. For the second half of cooking, don’t forget to uncover the pot. This allows some of that liquid to evaporate for a richer, more concentrated flavor and consistency.

Don’t be concerned that there’s so little liquid in the pot after adding the onions and beef. In the covered pot warmed by the oven heat, the vegetables and meat release moisture that becomes the braising liquid. For the second half of cooking, don’t forget to uncover the pot. This allows some of that liquid to evaporate for a richer, more concentrated flavor and consistency.

Reviews
Lee W.
Excellent!
I made it exactly as it stated and it was definitely a family favorite. Will make again, I don&#x27;t think it has too many onions, at all, the second stage of cooking uncovered caramelizes them and it tastes fantastic. Be sure to cut decent sized chunks (2x2) of short rib, definitely makes a difference in consistency.

I made this tonight (2/15/21) following directions exactly, with the exception of using only 1/2T salt in the pasta water. This is definitely a keeper. While carb and fat heavy for me, my husband really, really loved it. I did too. But dietary restrictions require me to have dinners like this infrequently. I wish there was nutrition information included with these recipes. Overall, great recipe.

This was an exceptional dish. Will definitely make again.

We pick out a few recipes from each issue to try. My husband trends toward the indian flavors and I toward the italian flavors. Some recipes get the " that was good, but don't make it again" rating, while others get the "don't lose that recipe" rating. The pasta alla genovese was my choice this month. OH MY, it was delicious and definitely will be added to our personal cookbook. The only adjustment was that we used less meat than called for in the recipe, probably half the amount. We also tried the Beef curry and that also was very good, and will be kept.

Can I substitute ground beef for short ribs; or use a different cut?

We would not recommend substituting with ground beef. Ground beef is best cooked quickly over high heat, whereas short ribs should be cooked low and slow. A better substitute would be an equal amount (by weight) of chuck roast cut into 2" chunks.

How would you suggest modifying this to make it vegetarian? (Seems like a reasonable question given the states description that it isn't always made with beef)

Although it is not always served with meat in the sauce, most versions of Genovese sauce will include some meat in the pot with the onions to add meatiness and flavor to the dish. The meat in this case would be either leftover scraps or a cut of meat that would then be served as a secondi course (a brisket or a chuck roast, for example). Since the beef is a significant flavor component here, and we developed our recipe with beef, we would have to redevelop the recipe to account for that loss of flavor, which we unfortunately can't do.

I made it for dinner. This was nothing but onions. The flavor is covered by onions. Is the recipe correct? 3 pounds of onions? My family did not like it. I threw away the rest of it. This dish is very heavy as well. I do not think I will be making this again.

I'm so sorry you didn't like it. Yes, the recipe is correct with 3 pounds of onions. This is primarily an onion sauce - the beef is mostly there for flavor - so if you aren't a fan of onions it may not be the right fit. The onions cook covered for 1 1/2 hours and then uncovered for another 1 1/2 hours and should be browned and soft by the end of the three hours.

Thank you for your reply :) I do love onions but this dish was not for me.

Thank you for your reply :) I do love onions but this dish was not for me.

This recipe is fantastic. Food processor made quick work of slicing the onions and since it was out I just pulsed the carrot and celery a couple of times instead of chopping them. Everything is so broken down in the stew it was fine and saved a lot of time! Will happily make again!

I am really liking this. I ended up cooking it longer because I loved the color that was coming in. I tasted during cooking and decided to add just a splash of balsamic vinegar and a tablespoon or so of concentrated tomato paste for the last 30 minutes in the oven. I enjoyed the addition.

Can this be frozen? We don’t need the full recipe and it is nice to have something special to pull out on a day we don’t have time to so a lengthy project...

We didn't test freezing, but I think you could definitely freeze the sauce. I would probably not freeze the sauced pasta since, once you reheat it, the pasta will likely be overcooked.

Do we need to pre sear the short ribs prior to cooking? I have never braised without a pre sear?

Nope! Our braising technique in which we braise the meat half of the time covered and half uncovered allows the oven to brown the meat thus eliminating the extra browning step.

Has anyone tried adapting for the slow cooker? I'm unexpectedly going to be in office tomorrow so won't be home to braise. Was going to see if I could get away with the slow cooker although I'll probably sear the meat first.

We loved this. Yes definitely fatty, but the taste was delicious. Not too many onions for me! They were beautifully cooked.

Not low calorie, but my favorite kind of winter comfort food for a nice bottle of red. I did a double take on the onion quantity too - but no complaints - will definitely make again. A comment regarding boneless short ribs... Thank you to the radio caller that asked Chris and Sarah what we can substitute for boneless short ribs - especially since they aren't cheap and can be hard to find. The recommendation was Chuck Roast - in case anyone is deterred by the suggested cut of beef.

I look forward to this recipe, but am confused about the prologue being about a completely different dish, Pesto alla Genovese. Was this intentional?