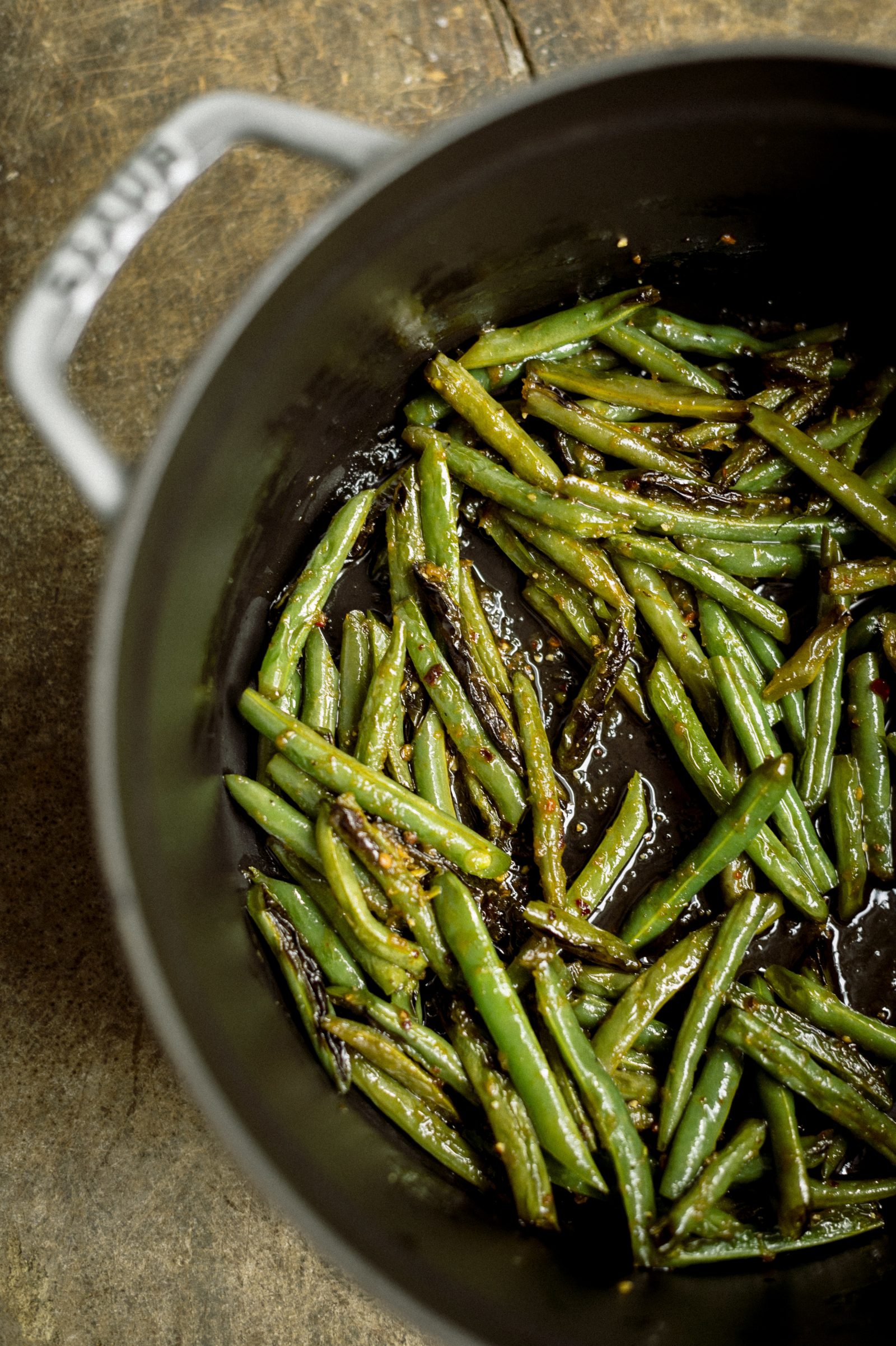 The challenge of stir-frying green beans is that, more often than not, the flavorings slide off and you’re left biting into a bland bean. The key is cooking them in a sauce that actually sticks. Chef Charles Phan, owner of The Slanted Door, a popular Vietnamese restaurant in San Francisco, caramelizes sugar, then stir-fries string beans in the blistering heat of a wok. A final toss with sake and fish sauce coats the charred beans with a dark, bittersweet sauce. We adjusted the recipe to work without a wok. Phan’s recipe calls for blanching the beans first. We simplified by adding the beans to a very hot pan with a small amount of oil, then making a sauce around them as they cooked. We found a Dutch oven worked best to control splattering—drying the beans thoroughly also helped (though a large skillet works in a pinch). Cutting the beans on a bias gave us more surface area for better browning. To re-create Phan’s flavorful sauce—itself a take on nuoc mau, or Vietnamese caramel sauce—we used brown sugar instead of taking the time to caramelize white sugar. It gave us comparable depth and flavor.

Don't use an ill-fitting lid. A proper seal was key to this recipe, whether you cook the beans in a Dutch oven or a skillet. Have the lid ready as soon as you add water to the pan.

Reviews
Charles M.
Deceptively wonderful side dish
I have told so many people about this recipe and served it many times. People just don’t believe the ingredients and are most surprised about the fish sauce ingredient.
Shefa B.
Nice but Won&#x27;t Make it to My Personal Cookboot
I gave it three stars because I chalk some of the final outcome to me - perhaps I didn&#x27;t get the pan hot enough or some other instruction but I didn&#x27;t get the char and I didn&#x27;t get much flavor (perhaps because of it). Still, it was a nice change.

These green beans are fantastic and have become part of the weekly rotation. Make sure to let them char enough, you'll be rewarded for your patience! I always use red boat or three crabs brand of fish sauce- makes a big difference! Ground white pepper is nice addition, but won't make or break the meal if you don't have it. The flavor profile of these beans go well with lots of different mains. Have also used haricots verts in the past, works just as well but adjust for time to avoid soggy beans.

Made this today and it was superb! I was a bit concerned about using fish oil (smells pretty bad, frankly), but after all was said and done (and cooked!), these beans were delicious with a wonderfully complex flavor.

I just finished eating this dish for dinner and I must say it was pretty amazing. I was expecting to be disappointed as I thought with the amount of ginger called for it would over power the dish but it did not in any way. I used Three Crab fish sauce and grape seed oil for my vegetable oil, I've never used either in my cooking but I think it's the fish sauce that gives this dish a real depth of flavor. The dish was great and I added it to my list of things that will impress your dinner guests.

Great flavor and both easy and fast to make. Will happily make again.