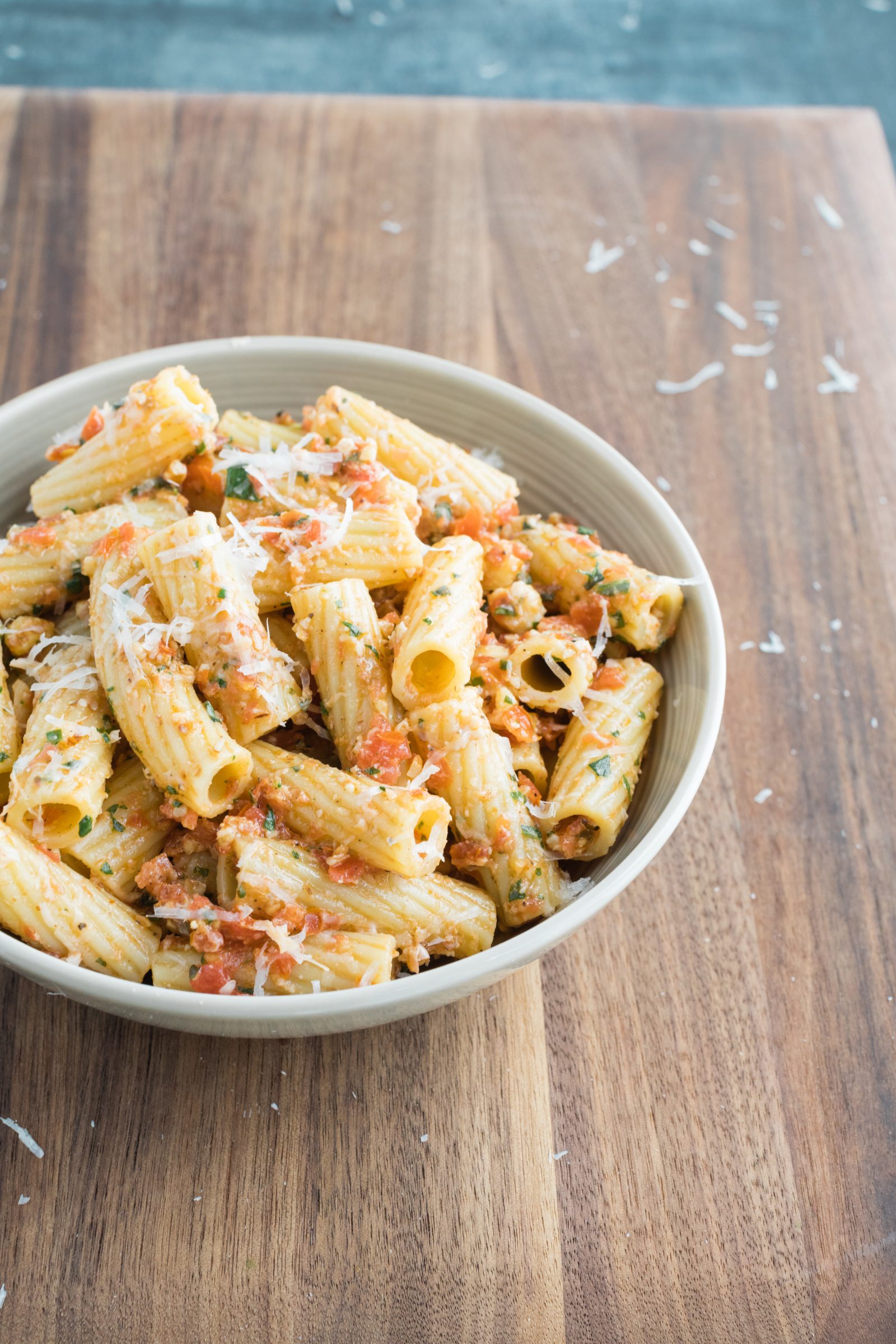 We hear “pesto” and see shades of green, but the word refers to prep, not pigment. It stems from pestare, to pound—this Italian sauce traditionally was made with a mortar and pestle. The basil-heavy, and therefore green, version we know best comes from northwestern Italy. In Sicily, you’ll find pesto Trapanese (named for the town of Trapani), a sauce also known as mataroccu. It has less basil than the northern version and adds tomatoes, garlic and almonds, the latter a nod to Sicily’s Arabic heritage. To make this a truly year-round recipe we ruled out standard winter tomatoes and instead settled on cherry tomatoes, though grape or small plum tomatoes worked, too. For ease, we used a food processor, though we found it was best to incorporate the olive oil or cheese (pecorino) by hand at the end. Raw almonds are common, but we found them a little dull. When we toasted them, however, we were wowed by how they brought out the sweetness of the tomato, added a crispier crunch and improved the balance of the dish. We preferred blanched, slivered almonds, which were easiest to toast and grind, but any variety is fine.

Don’t add the cooking water to the sauce right away. While we always reserve some starchy cooking water before draining pasta, we didn't always need it for this sauce, which gets ample moisture from the tomatoes.

This is absolutely delicious! The first time I made it I mistakenly left the almonds in the processor when I added the tomatoes etc., but it was terrific. This time I remembered to wait and put the chopped almonds back in with the pasta etc. and it was even better! And sooo easy and healthy!!

Loved this! For the first time I planted basil (outside) and was looking for a recipe to use it in. I did use walnuts instead of almonds as that is what I had on hand. I had purchased grape tomatoes from the farmer's market so was glad to add them to this recipe. Very tasty, easy to make and it is a keeper.

It’s me again... FYI, use the recipe in the tv episode and in this print. Especially, use slivered almonds not whole skin on nuts. I’ve now made it both ways, and the video version is much better and easier too!