We wanted a chicken soup that tastes fresh and light, yet also robust and satisfying. We found our answer in chikhirtma, a traditional soup from Georgia, the Eurasian country that bridges Turkey and Russia. Georgian cuisine often marries Western techniques with Eastern flavors. We used a recipe from Darra Goldstein, author of “The Georgian Feast,” as our starting point. Her chikhirtma calls for a whole chicken, but that much meat made the soup feel heavy, so we used just chicken legs. We built flavor with bunches of dill and cilantro stems and a head of garlic, as well as coriander, cinnamon and bay leaves.

Don’t substitute white meat. Bone-in dark meat is better suited to this recipe. The bones and collagen add flavor and body to the broth, and the dark meat is less apt to dry out.

For the broth and chicken 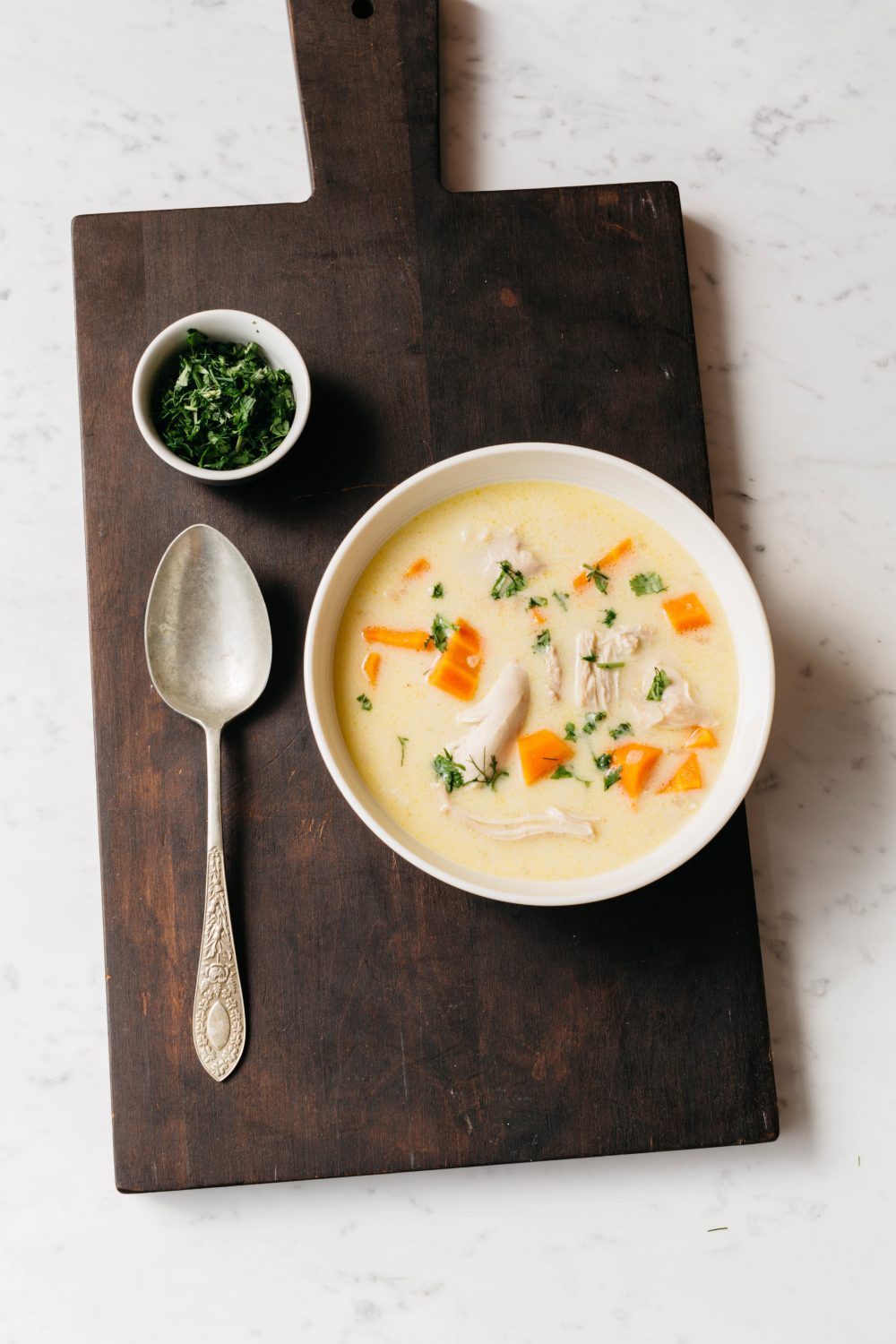 Reviews
Patrick M.
Absolutely Wonderful
I was afraid it was doing to be heavy, but after watching the video and trusting the process I was rewarded with a delightfully light, bright, but hearty chicken soup that is perfect for this early Summer evening. Saved a couple of the poached garlic cloves to spread on some small toasted french bread to eat with the soup.

Fabulous recipe! I've already shared the recipe with several of my colleagues. One important omission comparing the printed recipe to the video... In the recipe, you instruct us to remove the head of garlic and set aside. In the video, you demonstrate squeezing the softened garlic back into the soup -- which is a great addition! If I hadn't watched the video first, I would have know to do that. I added some fine egg noodles to the finished soup, which absorb that delicious broth and fill out the dish a bit.

Will this soup be okay as leftovers? I’m wondering how the egg yolk broth holds up.

The soup should be OK as leftovers. The egg mixture won't separate as it cools but it *is* heat-sensitive so make sure to reheat it very gently over low heat on the stovetop rather than in a microwave.

I’ve made this recipe many times and it reheats beautifully! I’ve never had a cooked yolk issue, but I suppose it’s possible. Such a wonderful soup, thank you MS!

I’ve made this recipe many times and it reheats beautifully! I’ve never had a cooked yolk issue, but I suppose it’s possible. Such a wonderful soup, thank you MS!

I loved the flavors of this despite the chicken tasting a little overcooked. I cooked for 45 minutes in the first step as instructed. Did I maybe have the heat too high? Would love your feedback. I've been cooking more meat since discovering Milk Street so still getting the hang of it. Thank you!

This is a great soup! I added egg noodles... will make again

Super good and definitely making again! The egg yolks make it surprisingly creamy which is amazing for my dairy-free husband and it was easy to make it gluten-free for me (celiac).
I used bone-in/skin-on chicken thighs instead of legs (because it was what I had on hand) and it worked perfectly. I also substituted a King Arthur gluten free all-purpose flour (to make it gluten free due to celiac) and I think that worked well too.
I added raw chopped asparagus (about 1-inch spears) at the same time as the carrots and that is a pretty good time to add those in as well. I may drop the carrots and asparagus in a bit later the next time I make this, maybe 5 minutes into cooking the onions, just because I personally like them a bit more crunchy. I think next time I make this, I'll add in a gluten free pasta as well! (I love the suggestion for egg noodles but alas, I am allergic to those.)

Very good! I love that it's creamy but without the use of milk products (I did use olive oil instead of butter). I served it by putting a scoop of white rice in each bowl and spooning the soup over it. Warm and filling, but still light and refreshing!

So rich and creamy yet simultaneously light. Having added egg noodles thanks to other commenters’ suggestions, this may be my go-to chicken noodle soup from now on. The broth is incredible.

Leftovers reheated well in the microwave with no effect on texture, but it was much less flavorful the second day. Maybe the noodles soaked it all up?