What is Gochujang? - How to Use Gochujang, Korean Jangs, Gochujang Recipes | Christopher Kimball’s Milk Street

Sweet, fruity, spicy and full of pleasantly fermented funk, gochujang has been a crucial ingredient in Korean cooking for centuries—so popular there’s an annual festival to celebrate it. Now, the fermented chili paste is making its way into more U.S. grocery stores, restaurants and recipes. But what is this bright red jang? What is it made of? And how do you actually use it? We dive into all this and more.

And to learn more about Korean cooking, gochujang and other staple ingredients, sign up for our livestream class, Korean Bibimbap with Shin Kim, on April 28.

Many of the core flavors of Korean food are built from a family of fermented soy-based condiments known as jangs. One of the most complex—and the most popular in the U.S.—is gochujang, a spicy red pepper paste with a texture and savoriness similar to Japanese miso. Spice levels vary, so you can pick your favorite based on the amount of heat you like. Traditional methods for making it call for hand mixing a slurry of soy sauce, sticky rice, salt, malt and Korean chili powder, then fermenting it in large clay pots left outside in the sun. The pots—called onggi—are porous, which helps foster fermentation for deeper flavor. Though six months is acceptable, the best gochujangs are aged as long as five years.

How do I cook with gochujang?

Found in countless recipes, gochujang is an essential flavor in dishes like bibimbap and often shows up in the marinades and glazes of Korean barbecue. It packs a punch, so use it in moderation—you can always add more later. Its flavor is versatile enough to use with any protein or vegetable, great in stir-fries, braises, soups and noodles. We love it in our Miso-Gochujang Shredded Pork, Grilled Gochujang Shrimp with Scallions, Gochujang Skirt Steak and Noodles with Kimchi, Gochujang-Glazed Baby Back Ribs and Gochujang-Glazed Potatoes (Gamja Jorim).

In our kitchen, we also like experimenting with it in more unusual ways to make the most of that funky, umami-rich flavor. Try it in our Gochujang Mac and Cheese, Gochujang Sour Cream or Charred Zucchini with Gochujang and Scallions to see just how expansive its uses can be.

Jangs form the pungent flavor base of Korean cooking. However, each contains a tremendous amount of salt, which acts as a preservative. Tread lightly and use in moderation to ensure other ingredients don’t get overwhelmed—the sweet, umami, spicy flavors will still shine.

Where can I buy gochujang?

Though once considered an “exotic” ingredient in the U.S., you can now find gochujang at just about any grocery store or on Amazon. For the most traditional and flavorful options, opt for a Korean market or try our favorite version, JookJangYeon’s Premium Gochujang from the Milk Street Store.

What about all the other “jangs”?

While gochujang is the most popular in the U.S., it is only one out of the three core jangs. All three contain a tremendous amount of salt, which acts as a preservative, and they are particularly pungent. So, used incorrectly, they overwhelm other ingredients. The simplest of the jangs—made from soy beans, salt and water—is ganjang, or soy sauce, of which there are dozens of varieties. Doenjang makes up the third, a fermented soybean paste similar to Japanese miso. But miso is milder, smoother and sweeter, while doenjang is stronger and more pungent. To make it, cooked soybeans are formed into blocks called meju and fermented for up to three months.

Jangs are tamed by balancing them with a combination of bold and bland ingredients, says Korean chef, Hooni Kim, who we spoke to in 2021. That’s why Korean stews are made with water instead of broth, and many include tofu to absorb stronger flavors. Other dishes include both sugar and fruits such as Asian pear to offset the salt. And the table always is set with several banchan, or side dishes. These could include briny pickles and funky fermented kimchi on one end of the flavor spectrum, and lightly seasoned spinach and plain white rice on the other.

Check out our collection of jangs 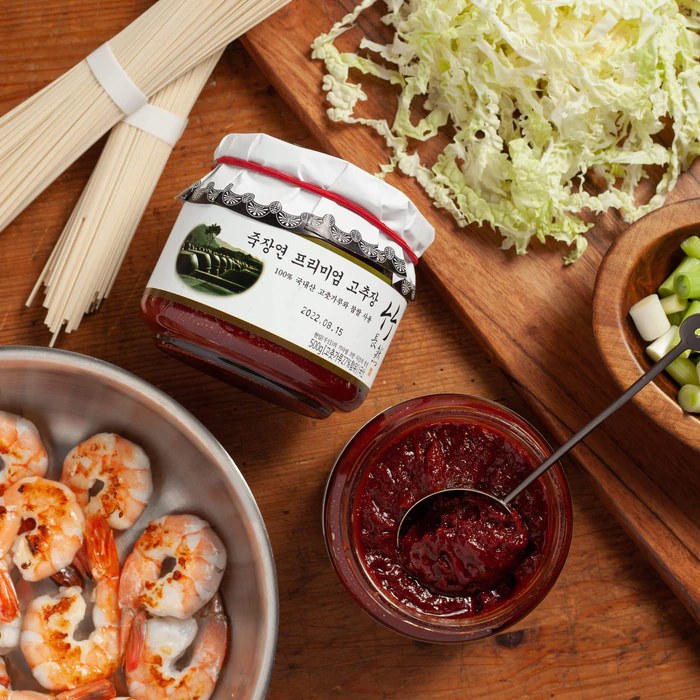 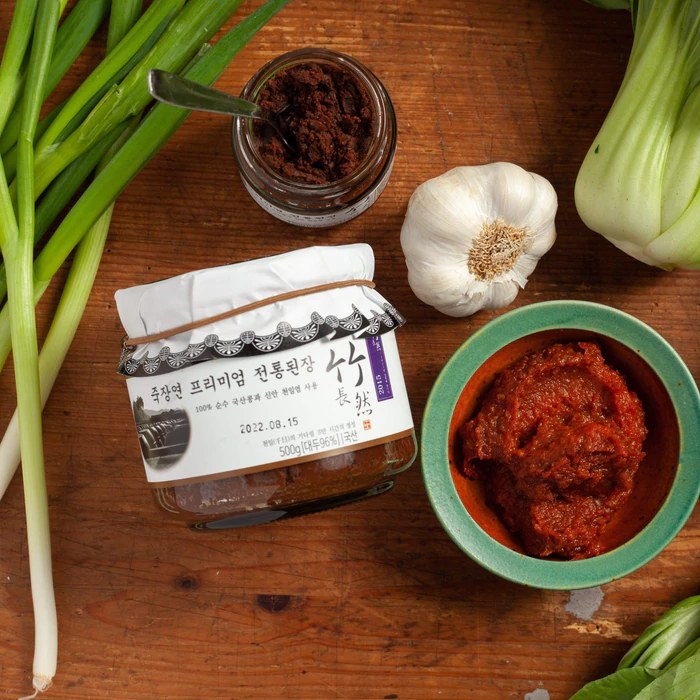 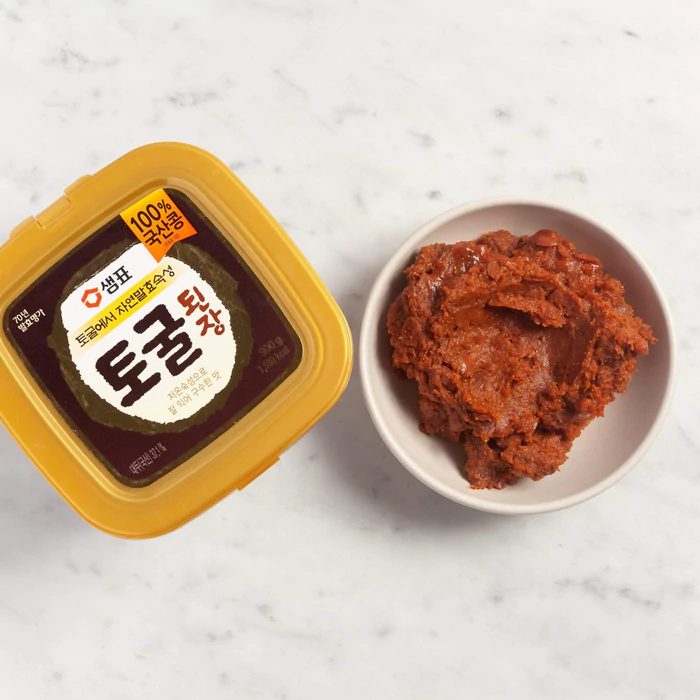 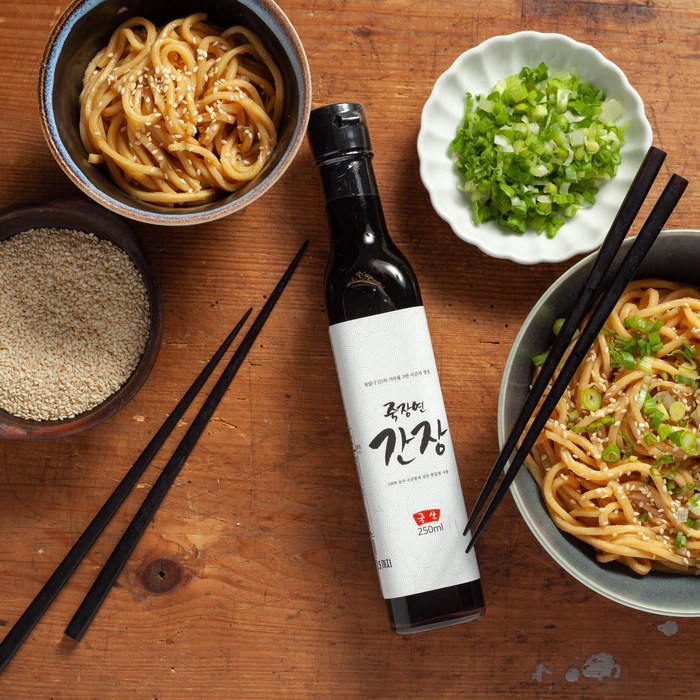 I’ve also heard about gochugaru...what’s that?

Gochugaru, essentially chili flakes, are made from sun-dried and deseeded Korean hot peppers. It is an essential spice cabinet ingredient in Korean cooking and a crucial ingredient in making gochujang. But it’s also used on its own in other Korean staples like kimchi, marinades, stews and side dishes. Its fruity, earthy flavor and approachable medium heat make it well rounded and adaptable to all manner of recipes in place of store-bought chili powder or chili flakes.

For more on Korean cooking, gochujang and other staple ingredients, don’t forget to sign up for our livestream class, Korean Bibimbap with Shin Kim, on April 28.